Race With The Devil DVD Review 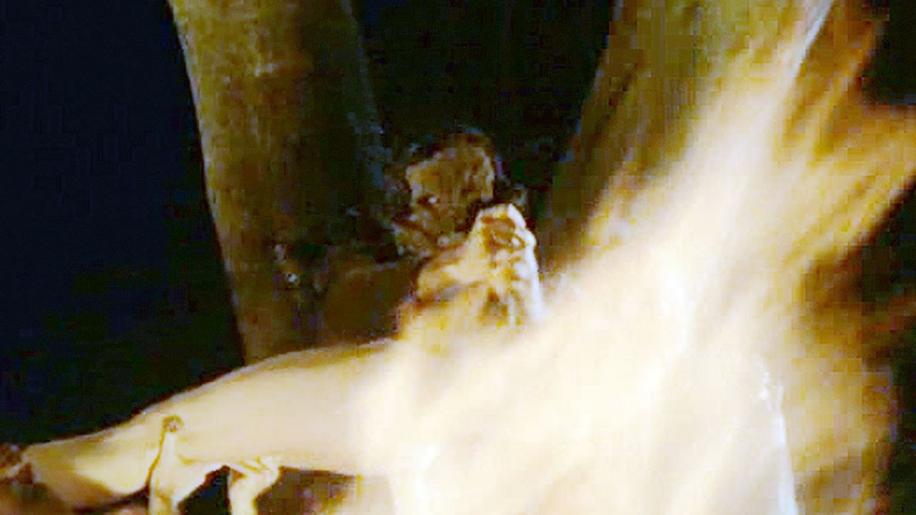 Coming in with an anamorphic 1.85:1 image, Race With The Devil gets by without any major defect at all. And, considering its age and relatively low status in the grand scheme of things, there is hardly any print damage to speak of either. Yep, hardly a scratch or flicker or a blemish to be seen, which is very refreshing for what was effectively little more than a drive-in B-flick. However, the whole movie is stippled with grain. Look at the full moon shot on the first night that is almost gauzed-over with the stuff. On a 44 inch screen this was pretty well-evident throughout, though never to a distracting degree - but on a 32 inch screen the grain was quite subdued, leaving the image remarkably clear and pleasing.

Colours aren't too bad, but still a little muted. The best they look are when coven members hang off the back of the RV during the initial chase and are demonically illuminated by the red tail-lights. There is no smearing or bleeding evident at all. The racing leathers of Fonda and Oates also shine through quite smartly against the earthy hues of the scrubland that they ride through on their dirt-bikes. Skin tones are accurate to every print that I've seen of this film, and are quite stubble-detailed up close. In fact, detail on the whole is pretty decent with only landscape shots and tree-filled backgrounds really suffering. The fast-action is all exhibited very well with no motion-trailing, a good stable grip on the image and no blurring of the tumbling vehicles front or rear. A curious contrast-shift on some old VHS prints that played havoc with the final chase has, thankfully, been removed. In fact, the whole film now displays great contrast, with light and dark transitions smoothly handled. Black levels too, are rich and deep, with the initial foot pursuit of the RV looking all the more menacing as the Satanists tear after it through the night.

The curious fogging of the nudity during the sacrifice is intentional and not a fault of the transfer - just an effort to avoid an R rating in the States. So, on the whole, despite the grain and some unfortunate edge-enhancement on buildings, trees and skylines - and petrol pumps, quite strangely - the image is a very nice transfer of a good, cleaned-up print. Race With Devil comes with its original 2-Channel Mono mix that, whilst hardly delivering the all-enveloping sound design that we know and love from the genre, still manages to pack a punch. The dialogue may sound a little brittle, but it is always clear. Leonard Rosenman's score is powerfully presented - unfortunately so in the case of the far-too twee and nice side of it, but terrifically crisp and aggressive when it comes to the spooky threatening side of the sinister, coven-led cues. When Oates and Fonda get blasting with the shotgun, it really roars with that throaty 70's belch, and the auto-impacts always sound deep and crunching. The plentiful screaming, courtesy mainly from Lara Parker, will certainly climb inside your skull and nettle your brain. That snake-attack sequence really tests your nerves, folks. But, overall, the soundtrack delivers without hiss or distortion and is an effective mix that is probably the best you've ever heard it. Firstly, Anchor Bay has done themselves proud with securing their own produced retrospective making-of, featuring star Peter Fonda and his reminiscences of the movie. Called Hell On Wheels, this 17.52 mins featurette is an enthusiastic trip down memory lane for Fonda who, alongside his buddy Oates, actually owned a slice of the film, too. He admits that after hitting it off so well with Oates in their first two movies together - with some clips from these being offered up here - they couldn't wait to work together again. Consequently, the script didn't really matter, or the plot - just that the two rowdies could have a laugh and a whole heap of fun, and get paid for it. Nevertheless, the two still gave the film their all and Fonda is justly proud of his involvement. Coming across just like his stoned-surfer-dude, cameo character in John Carpenter's risible Plissken sequel, Escape From LA, Fonda is the epitome of the aging hippy, every sentence drawled out in infectious dude-speak. He narrates over specific clips and stills culled from the movie and gives a dead-on expose of how subtle nuance and character ticks are tricky things to get right - “It's all in the eyes, you know ...” and when it's on a cinema screen, “An eyebrow's like a goddamn canoe!” He comes across as a big, gleeful kid, sweetly laid-back and still and only in it for the laughs. Good stuff for a low-budget B-picture.

The Commentary track is also terrific value. Featuring producer Paul (Police Academy) Maslansky and actress Lara Parker and moderated by Perry Martin, this yak-track is a treasure-trove for fans, covering literally everything about the production and delivered in an embracing and good-natured manner by all three. Enthusing particularly about the LA stunt team, the bear-like Jack Starrett and the wonderful R.G. Armstrong, Maslansky and Parker trade amusing anecdotes - the episode between Loretta Swit and a disgruntled fan, the coldness of the Texas shoot and, consequently, the shivery pool scene and the timely arrival of house being transported down a road - whilst Martin manages to avoid too much intrusion and guides the conversation skilfully. He does have to remind Maslansky of a few facts once in a while though - like what the movie's initial rating was, for instance. Now the author of two vampire novels, Parker gives a good insight into the monotonous mechanics of spending most of a film-shoot bouncing off the walls of a speeding RV, reacting to things that aren't really there - the freakish pool-onlookers - and screaming your lungs out every day. A great track, folks.Next up is the original Theatrical Trailer, which possesses one of those fabulous, gravel-voiced narrators with cool lines such as “There was nowhere they could hide ... no-one they could trust.” Three radio spots play out over eerie blue stills that put the sacrificial tree up front and centre. The Poster and Stills Gallery has thirty-six lobby cards and some international posters, whilst the Behind-The-Scenes Gallery presents us with forty-four black and white stills that come courtesy of Paul Maslansky.

And finally, we get trailers for The Entity, Quicksilver Highway and Ghost In The Machine. Not a bad selection for this often overlooked 70's genre-crossover. Great to see Race With The Devil resurface on our favourite format. A long time guilty pleasure of mine that deserves some attention. Possibly a bit too obvious and slow for new audiences weaned on high-concept, thrill-a-minute stuff (until the final Road Warrior chase, that is), but for all those that remember it from its numerous late-night showings, this is a fine spit 'n' polish. It might be slight of story, full of plot-holes and illogicalities but there is still a rich ominous streak coursing through it, some fine shocks and a tour-de-force final act that is still pulse-pounding and dangerous when compared to the carmaggeddons we see today. Not a classic but a rare gem, nonetheless.

Anchor Bay have put some great value extras in the package and it's nice to see and, more importantly hear, that they haven't tampered with the audio mix. Go on, throw down the gauntlet and race with the devil!