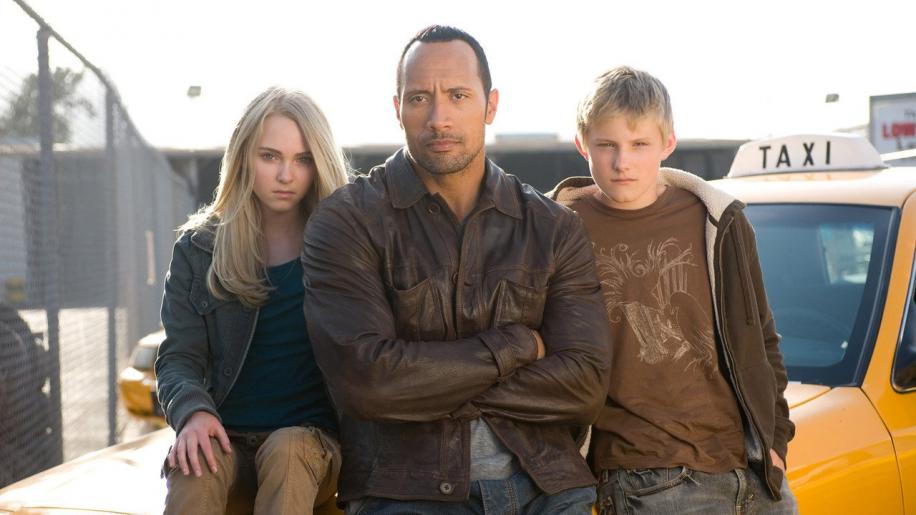 The TV spots that advertised the very recent 'Race to Witch Mountain' raised fears that we were being offered another pretty lame kiddie sci-fi action movie. The fact that it was a remake of 'Escape to Witch Mountain', a pretty lame kiddie sci-fi action movie from the 1970's, didn't really help either. I sat down to watch it with not very high expectations, prepared to be bored after 20 minutes. But, you know what? It's actually a very enjoyable movie that has enough going for it to hold the attention of both adults and kids alike. What we have here is a good family film that entertains its audience. The script has humour, the acting is credible, the action sequences have 'grown up' explosions and there is some real tension in the story. It's been a while since I've been so pleasantly surprised by a Disney live action picture as they're usually bland affairs that leave adults out in the cold due to their 'safe' storylines and content.

Dwayne (The Rock) Johnson plays Jack Bruno, a Las Vegas taxi driver who just wants to forget his more colourful past as a 'wheel man' and take Imperial Stormtroopers to Star Wars conventions all day long. He fends off Mr Wolf's goons who want him to go back to his former profession and all is well until two children appear in the back of his cab with a wad of notes and tell him to go 'That way'. It's not long before his yellow cab is being pursued by members of an ultra secret Agency, led by one Major Henry Burke (Ciaran Hinds) who are following up a lead on a crash landed UFO. Not only does he have to contend with this, there is a Predator type creature called a Siphon on the trail of the two children.
The hook of the story is that the two kids, Seth (Alexander Ludwig) & Sara (AnnaSophia Robb), are aliens who have been sent here by their parents because the government of their dying planet intends to attack and invade Earth. They must recover an object that contains the results of an experiment set up by their parents. The research from this experiment will save their planet, thereby removing the need to attack and invade Earth. However, their planet's Military prefer plan A and have sent the Siphon assassin to stop them.
Jack and the children endure a serious of attacks, by the end of which the yellow cab has taken on the appearance of a well raced stock car that would strike fear into the heart of an insurance company. Throughout the picture, we have to run the gauntlet of gun fights, explosions and fires with the fleeing trio.
Along the way they involve Dr. Alex Friedman (Carla Gugino), a ridiculed scientist who is in Las Vegas giving speeches about legitimate scientific theories on UFOs and outer space.
On attempting to enter the secret establishment containing the children's spaceship, the group are captured and the alien kids are taken away for experimentation, while the two adults are released - but of course they just can't leave the kids behind so a spirited rescue attempt follows. Will they succeed in freeing the children and, in turn, save the future of mankind on planet Earth? Watch it and find out.

I have to admit that Dwayne Johnson has risen considerably in my estimation for his very likeable performance in this movie, almost to the point where I can see him overcoming the damage done by 'The Scorpion King' to his reputation as a leading man. He proves that he can act too, rather than just behave like an all action toy robot and he also reveals a talent for light comedy, which is one of the most difficult things for an actor to pull off. It also has to be said that he does look good in the action scenes.
The two children turn in very credible performances with their limited emotional alien responses, foregoing the 'Hollywood kid' type of on screen personas that would make you want to part company with your Big Mac and fries.

This movie takes into account the fact that modern kids just won't be fobbed off with poor special effects - as was the case in the past. From the opening sequence of the lone UFO bursting through the Earth's atmosphere, we're treated to special effects that would not look out of place in the latest Hollywood Blockbuster. This is a good thing as it also pulls in the late teen audience or those who might watch a movie for the effects alone. There's only one scene where the effects let the movie down and that's where Sara uses her mind power to stop bullets in mid air. As the CGI appeared so overlit, it revealed a bit too much and was the only point in the movie that looked a bit of a suss job.

We're always keen to classify or pigeon hole movies, but this one straddles the generations quite comfortably. You could argue that the plot is somewhat simple and silly, but then you could also level the very same criticism at many mainstream movies that put bums on seats.
'Race to Witch Mountain' holds your attention for its full run time and provides us with a movie that parents can safely watch in the company of their children. Some may feel that it's a bit on the violent side for a family movie, but come on - we live in the modern world where kids see worse on the TV news each day.
Well done Disney for producing something that will most certainly capture the imagination of kids as well as provide an enjoyable time for adults in the audience.