Conduct WW2 battles in the comfort of your own home 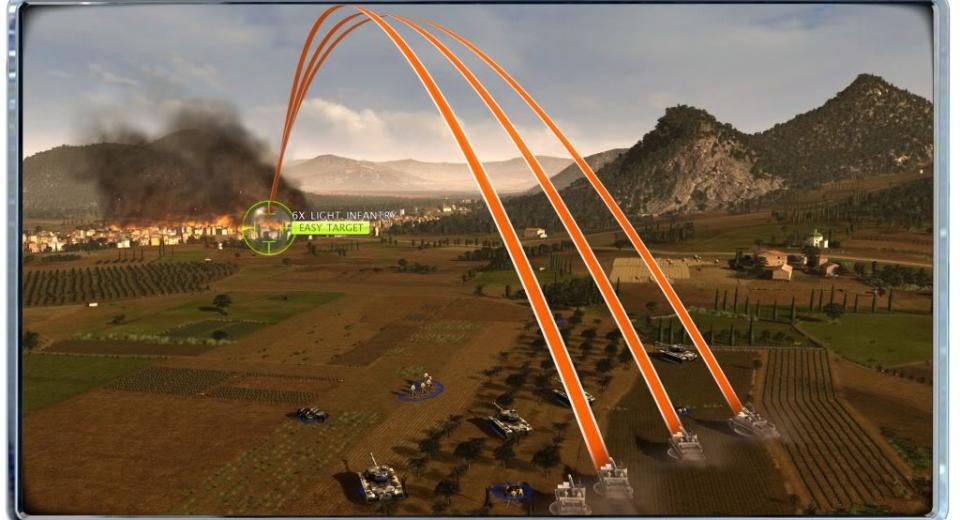 The video-game industry is not one that any old mug can enter without the proper acumen or know how. Therefore it’s strange to see new developers pop up from nowhere every now and again, especially when there are rival developers who dwarf these fledgling companies and some publishers ignore smaller studio’s best efforts. No more so is this the case than with R.U.S.E. developers, Eugen Systems. The Paris based studio, have stated that they intend to only produce Real Time Strategy (RTS) games for all current gen consoles and PC. Very specific indeed, but it also means they won’t lose focus on their projects with genres they’re unfamiliar with. Their last outing was on PC, Act of War, which was quite well received and scored an average of around 80%. So with that in mind, this surely indicates a knowledge and familiarity with concepts that are required to make a successful RTS game.

Having said this, the RTS genre is a risky one to dabble with if you’re a newcomer as the console versions are not played with the easier control method of mouse and/or keyboard. Therefore with a pad only to work with, some game fall into the trap of having a too complex or fiddly lay out that makes playing a chore as opposed to a pastime. But with recent outings such as Command & Conquer (C&C) and Civilization Revolution (Civ Rev) it is clear that it is possible to make successful strategy games for console. And with Ubisoft behind Eugen, then surely it could be assumed that they would not allow the product to be shipped with a broken or fiddly control system, although, Tom Clancy’s Endwar was something of a mixed bag when it came to reviews, with voice controls failing to ignite people’s passion for the genre.

I will openly admit here that I did not know anything about this game until I saw an advert for it in a games magazine a couple of months back. This usually denotes the belief and confidence that a developer has in its product, though Activision proved us all wrong with Singularity not long ago. Therefore I have had little anticipation about this release, whilst its production has been very much under wraps. But, just like I said with Singularity, this will stand the developer in good stead to establish a name for itself. Assuming, of course, that the controls are not too fiddly and the core game-play and strategic elements are rewarding as they should be.

A minimum expectation of games in the current generation is their aesthetics are of a high standard, with the actual game play, sadly, often suffering due to this. Fortunately for R.U.S.E. then, the graphics in game are actually rather good with battlefields often having varied terrains throughout and the units being very detailed. It does sometimes take a while for the game to catch up when you zoom in, and it filters all the graphics through slowly. Hardly ruining the whole experience but it is noticeable, but by the same token, understandable when there is a war going on at the same time in the background.
A game of this type would seem to break the ‘norm’ if it didn’t tell its story through cut-scenes, which appears to be the standard these days. All is in order in this respect too, with such detailed scenes that, dare I say it, could even rival a game such as Final Fantasy XIII. The characters are all very well animated, and more importantly, believable without being too stereotypical or farfetched.

The attention to detail in R.U.S.E. can be seen time and time again through its game-play. If you were to send a group of tanks to take over a town, or attack a group of enemies situated behind it, then if you zoom in you can see them navigate the town via roads. They won’t just trawl through the town, running over buildings or through walls which does slow down your units if the roads are full of twists and turns. This adds to the strategy of the game, planning specific times for your attacks and judging when enemies will leave the town etc. Not only this, but the light infantry also interact with their environment too. When ordered to a similar town to the tanks, or say a town square, they will then proceed to take the nearest cover e.g. hiding behind a well or stack of crates. This adds to the realistic nature of R.U.S.E., as opposed to the two units facing off against one another without ever looking to take cover.

With so many units on screen at once, it’s often hard to keep track of where they all are, and most importantly, where the enemy is in relation to them. Whilst zoomed out, a group’s icon will become larger depending on how many individual units are part of it, thus representing its strength. This also applies to the enemy too, which allows you to view the strength of their next assault. Each unit will react differently when selected and when they engage in combat. Therefore there is a strong array of sounds when battles are on-going; explosions, bullets being fired, tanks moving and all these fade out when you pan the camera out. Friednlies also correspond back to the player, be it to tell you they have destroyed a target or that they are currently under fire. Little things like this help you keep track of which of your troops are in most need of attention.

You will be pleased to know that R.U.S.E.’s controls seem to allow gameplay to happen ‘on the fly’ and units are easily controllable. Basic camera control is achieved through the analogue sticks; the Left Stick (LS) moves the camera horizontally whilst the Right Stick (RS) pans the camera in/out vertically. Managing your units is also easy, select them with X and press it again either on the map to move them, or on an enemy unit to attack them. If you want a set of units to form a group, hover over one and press square which will give you control of all other identical units in the immediate vicinity, thus allowing you to form up when you encounter a large enemy assault. This also eliminates the often too fiddly dragging a box over a given area to control many troops in one area. You can however hold R2 down which brings up a circular box with which you can highlight multiple units with which again works better than dragging an extended box across the screen.

This brings me onto the units/buildings that you control. There are your usual suspects all present and accounted for; light units (infantry), various vehicles (tanks and planes) and eventually buildings where your forces are created (factories). The more of which you have in one area, the quicker production will be, which encourages the player to have one specific location in which to create units, which will, undoubtedly, be surrounded by protective measures such as tanks and anti-aircraft guns. These also have their own key strengths and weaknesses; tanks are effective against infantry whilst planes are effective against ground based assailants and provide reconnaissance. All of these reflect the time period that the game is set in, WW2, so familiar tanks and planes can be seen within the game, making it feel realistic and as if you are commanding some of the battles from the era.

The one key trick the game has up its sleeve is the Ruse card system. These cards are granted at intervals throughout the game which give you access to certain ‘perks’ which give you an edge over your enemy, assuming they don’t cotton on to them first. For example, decryption grants you the ability to tap into your opponents’ movements for a five minute period, allowing you to adjust your units accordingly depending on the strength of impending attacks.

With three difficulty modes to play through, R.U.S.E. could take a while for loyal fans to finish. The fact that no doubt your plans and strategies will often get shot down in flames, it will take you more than one attempt to complete each mission and the secondary objectives. These also give the player experience points (XP) and this adds up to give you an overall level and rank over your R.U.S.E. career. This, for trophy collecting nuts, will mean you have to get to level 100 if you want to go platinum, giving the game a high replayability.

There’s also a quick play mode that generates a random mission to achieve, not to mention the multiplayer that pits Playstation Network (PSN) users against each other head-to-head. This is a lot trickier and advanced than playing against the computer in the main campaign, meaning if you’re like me, then your simplistic and far too obvious plans will get trodden all over, with an inevitable loss occurring. Each player gets to play as six different countries or sides if you like including the Nazis, British and Americans.

Whilst R.U.S.E. is a very successful RTS game and highly addictive, it fails to ignite the genre with any new and refreshing ideas. Of course with Move control, if implemented well, this could make it stand out amongst the crowd once it lands, and also give people another reason to hold onto this for the peripheral’s release. But until that time it remains one of the best RTS games that the PS3 has to offer, and, unquestionably, there must be some Downloadable Content (DLC) heading its way, through an extended campaign or a challenge pack which, by the sole game’s high standards, should be worth purchasing.

Real Time Strategy games don't often transfer well to consoles. Developers usually make a hash of the controls and the camera is obstructive as opposed to being useful but Eugen Systems have done their best to provide a more than functional title. Offering a unique twist in the form of RUSE cards and boasting a control scheme that is simple and effective it will be hard to find much better titles out there that do what this title does.