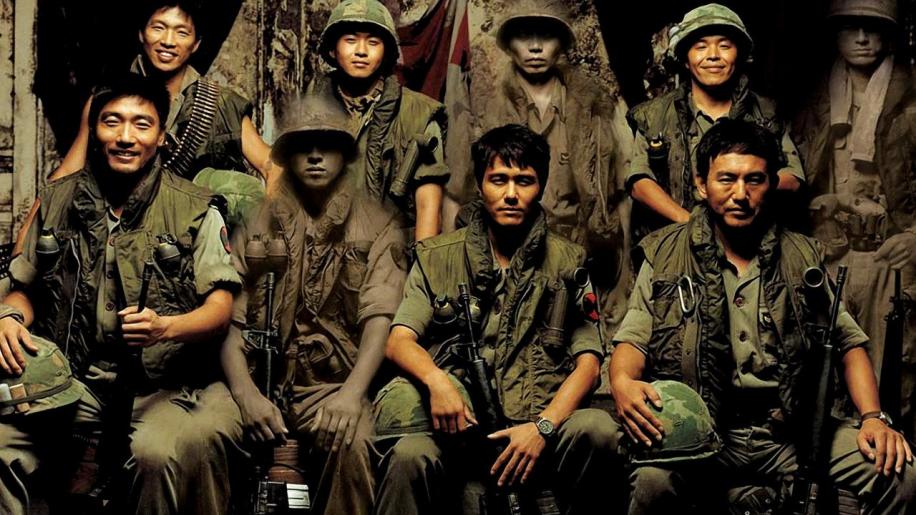 R-Point's mediocrity is further compounded with a woeful transfer, too. The image is an anamorphically enhanced 1.85:1 that has some of the worst edge-enhancement that I've seen. Be it vertical or horizontal, everything is stricken with it. The shot of the troops lining up on the dockside, silhouetted against the blue water and sky looks absolutely terrible on large screens. There's an awful glittery effect that dances along some edges, becoming terribly distracting. The contrast is set way too high, whiting out many scenes and turning daylight shots of the jungle into a veritable blurring mass of fierce glare. In fact, the film actually looks at its best when the scenes are set in the mist.

The image has a huge amount of grain washing all over it, so much so that it actually resembles a dusty old print from the early seventies. Damage though, is actually quite light - a few scratches and flecks here and there. Colours are reasonably strong too, and skin-tones are certainly adequate. Blacks, thankfully, are pretty solid and do manage to add some depth to the tunnels beneath the ruins and the whole, dank desolation of R-Point, itself. Fine detail is non-evident, unfortunately, squandering the effects of the long grass, the ruins and a crashed helicopter. To be honest, the image looked a lot better on a 32 inch screen but, even to someone who is not casting a critical eye over such things, this is a very unsatisfactory transfer. The disc come equipped with a choice of either Korean Dolby Digital 5.1 or 2.0 tracks, or a very loud DTS 5.1 mix. The 2.0 mix is fairly solid and detailed, providing plenty of power across the front soundstage, but the real action obviously resides with the two full surround tracks. Well, either of these will do the trick. The DTS is certainly louder and, perhaps a teensy bit clearer during the more bombastic moments such as the fire fight early on, and the later rainstorm, but, in all fairness, the DD5.1 is no slouch. Both provide exceptional steerage, with bullets whizzing all around you, solid gunfire and a rip-roaring bazooka blast. The ambush scene has distant machine-guns belching out from the rear-right, whilst return fire, from our cack-handed boys, roars straight out at you from the front. Nice. A helicopter rotors its way across the ceiling and the rainstorm fills the living room, the occasional crack of thunder booming deeply overhead. There are some quite unsettling shouts and moans deeply integrated into what amounts to a fairly complex sound design. A word of warning, watch out for a very early gunshot that takes place in a brothel - in DTS, this had me leaping out of my skin.

Given the choice, I'd opt for the DTS - it's louder and perhaps, to certain ears, clearer. But both surround mixes are wonderfully aggressive and immersive. Even if the movie, itself, disappoints, the audio transfers are top notch. As this is the Korean R3 release, the extras are, unsurprisingly, all in Korean. And there are no English subs for them, either. Which is unfortunate if, like me, you don't speak a word of Korean. However, they do look like a fairly comprehensive set of bonuses, though. For the record they appear to be as follows:

Disc 1 contains a Commentary Track that is from the director, a producer and the production chief. Disc 2 has a thirty minute Making Of that actually looks quite interesting. We see the cast going through some form of actor-to-soldier boot camp. (They weren't there anywhere near long enough, if you ask me.) We meet the director, the cast and the crew, the featurette roughly following the course of the film's plot and taking us behind-the-scenes of various key sequences. Some fx work is covered - an exploding head - and the whole thing looks quite cheerful. There's a Q&A session with the director and a couple of others that lasts around 18 mins and something entitled 1972 (9.58 mins) that features the FX people going over their rather limited input for the movie. That exploding head again, folks. Next up is a rather bizarre reading from a diary called simply R-Point, set over a montage of clips from the movie itself. If you look in the background you will see that the pages of the dairy are actually written in English, so this appears to be some form of dramatic prologue to the events depicted in the film. Of course, I'm just guessing here, though.

After a brief snippet from a guy who I think may have been a sound engineer for the film, we get the Theatrical Trailer and a TV spot. Overall, this is not a bad package by the looks of things. A major disappointment. R-Point had the benefit of a fairly illustrious back-catalogue to plunder from, and the unique setting and era of the Vietnam War in which to place its weird tale. Juvenile plotting, ham-fisted direction that promises much but delivers so little, some awful performances and a generally lousy attempt at military authenticity hamper this film at every turn. It fails to scare, or excite in any way. The setting of the dilapidated old house is under-used and the finale is head-scratchingly baffling and lacklustre. The narrative's attempts at ambivalence and ghostly eloquence are fumbled with the clichéd arrival of the ubiquitous Asian girl-phantom, with her long dark hair.

If I expected too much from this, I paid the price. R-Point is little more than a Korean Deathwatch. In my opinion, it's one to avoid.