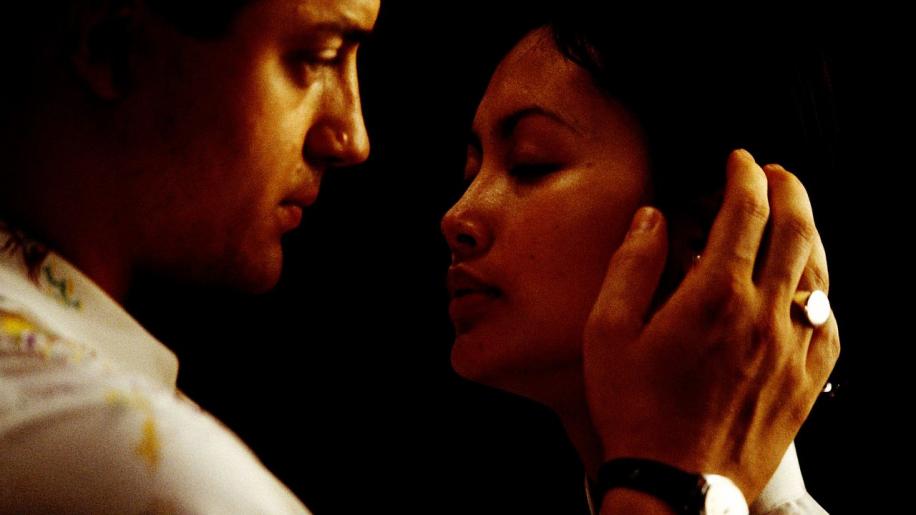 The video on offer here is really a mixed bag. Framed at the correct aspect ratio of 2.35:1 (anamorphic), it's something of a disappointment. Initially colours seem to be quite weak, with fleshtones looking a little washed out, particularly in outdoor scenes (when Fowler first meets Pyle outside the cafe is a good example of this). The image, too, is a tad on the soft side - it reminded me of the R1 "We Were Soldiers" DVD which is one of the poorer video transfers of recent times. Haloing rears its head a few times: obviously more pronounced on large displays, this is particularly apparent around characters outlines, although I would add that you really need to be looking for it to notice.

There are, however, other moments where the print looks great, and is quite revealing. I noticed this particularly in the facial close-up shots - the scene where Caines character is lying beside his mistress half in shadow looks particularly detailed, with the skin tones looking suitably authentic. The skin itself holds a lot of detail, such that you can almost make out the individual pores in Caine's face. Good stuff.

Many scenes throughout the film take place in shadow, and this generally holds up well to scrutiny: detail is retained well on the whole, with little discernible artefacting present. However, another area of inconsistency is grain. While many scenes appear clean and detailed, there are also those that (frequently) exhibit noticeable grain. The worst affected parts are those which feature skies (or smoke): grain and artefacting is obvious in its presence, which is rather off-putting. Add in the occasional scratch and you could be forgiven for thinking this is an old print. Disappointing given the film is so recent.

Overall a mixture of good and bad, which is a shame as it's a recent release. Could have been better.

Much of The Quiet American is dialogue driven, whether it be Caines dolcite voice-over, or character interaction on the screen, and the 448kbs Dolby Digital 5.1 soundtrack translates this well. The voiceovers in particular come across clear and precise, with a real sense of depth to Caine's voice.

Steering is generally good, precise with no discernible channel bleed issues, and the rears - whilst subdued - perform adequately. They are more apparent in the bustling town scenes than at any other time in the film, and are put to good use in conveying the ambience of the Saigon streets.

Although sparse on the action front, there are a few moments when your speakers will really spring to life, and these provide a satisfying jolt to proceedings. The first moment is when Caine is being escorted along a river by the French troops, and one of the soldiers fires a warning shot at an approaching boat. The scene is quiet, with ambient noises only, and the shot - when it comes - is delivered with a loud, precise crack which I defy anyone to resist jumping at. Its crisp and dynamic with no overhang - just how a good Dolby Digital soundtrack should be.

LFE as you might guess is restrained, but when the action does kick in, it does so with powerful ease. The scene where Pyle and Caine are hiding in the dug-out as Pyle confesses his love for Caines mistress is a prime example: all around them shells are raining down, some near some far, but each impact is delivered with a satisfying LFE thud. The showpiece moment though has got to be the market square. When all hell breaks loose, all five channels will rip through your room: again the LFE is deep and precise - and although I didn't measure it, we're talking in the realms of sub 30hz bass. It lends the scene the visceral impact that it needs, and is all the more powerful due to proceeding scenes being quiet: the contrast - aside from the quality of the sound - makes this particularly effective.

So a varied soundtrack, competent in delivery and in keeping with the subject of the movie, complete with a few pleasing moments of substantial 5.1 goodness.

A varied selection of extras are on offer, but by far the best is the fascinating Anatomy Of a Scene documentary, which gives you a real insight into the production and specifically one of the most key scenes in the film. Also we have an audio commentary, which is interesting purely because of the number of people who feature in it (almost the whole cast): at least you don't have to listen to one person droning on for 2 hours. I'm always wary when I see the word "Featurette" on a DVD, usually they consist of studio hype, clips of the movie which give away the whole plot, and very little else of substance. Sadly one of those pieces is present - a short, insubstantial waste of 5 minutes. Of marginally higher interest is a "Vietnam Timeline" feature, a mainly static, text driven set of screens which gives a potted history of the history in the run up to the Vietnam war: potted being the operative word as there's not a lot to it. Finally, a selection of 3 basic book reviews for Graham Greenes novel wrap up the package.

A reasonable movie but unjustified of the praise heaped upon it, this DVD has some interesting extras and good soundtrack, pity it's let down by a poor video transfer.