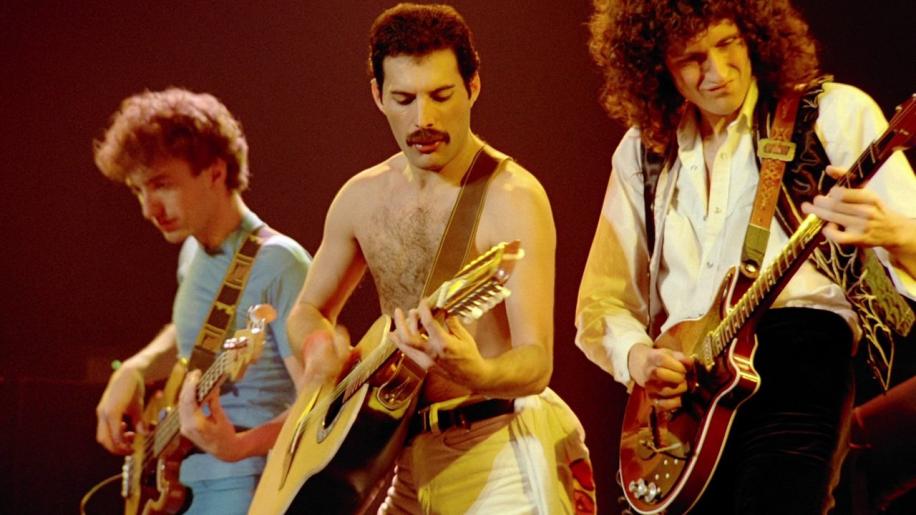 Queen Rock Montreal and Live Aid has certainly had a checkered history - being released on optical media more often than pretty much any other title. In 1981, Queen were on the cusp of megastardom. Having been around for 11 years, they were really at a turning point in their careers. They had just broken South America, and at the end of the year they had arranged for two special shows in Montreal. The idea was to film the concerts for cinema release.

However, the project was surrounded by tensions. The band quickly realised that they did not agree with the approach of Saul Swimmer, the Director / Producer behind the project. He wanted them to put on a title scripted choreographed show so that he could cover the concert with fewer cameras. Queen refused, reasoning that people were still paying to see the concert, and therefore the spontaneity that was essential to a Queen show should not be sacrificed.

Queen won out with the way they performed, but Swimmer stuck to his approach. The result was a film that Queen were emphatically not happy with. The resulting film was released to cinemas in 1984 under the title We Will Rock You, and subsequently made it to VHS both in the US and the UK. Due to rights issues, though, the title only made it to DVD in the USA. Released under its original title, it originally came to DVD straight from the cinema print, before being re-released with extras a few years later. The re-released version came out in two flavours DD 5.1 and DTS on separate releases - further confusing fans.

Eventually, Queen re-secured the rights to the film, and despite fan's dissent (who wanted new material) embarked on an ambitious restoration project. This involved cleaning up the print and the sound, as well as restoring footage, and releasing for the first time a CD version alongside the DVD and HD versions.

Call me sad if you will, but I have had the pleasure of owning every single version of this concert released, once on VHS, four times on DVD (the three USA versions and the latest UK version) and the Blu ray, and HD DVD version. I mention this not to enhance my “Queen Geek” status, but merely to accentuate that I have some knowledge of the different version released.

As a fan I had no trouble seeing why Queen chose to go back and revisit this concert. The reason the band regard this concert so highly is that it really does capture the band at a peak in their careers. A peak that they arguably would not reach again. The concert was filmed just after the release of The Game and although synthesisers reared their ugly head for the first time on this album, they were used sparingly. It was not until Hot Space that the Queen sound truly began to metamorphose. At this stage in their career, as well, they were not using extra musicians as they increasingly had to do later on in the eighties. The result, then, is just four incredibly tight musicians hammering out heavy rock to an appreciative audience.

And for people who have really grown up on Queen Live at Wembley (1986) it might be quite a shock as to just how heavy Queen were in this period of their career. They open the concert with a heavy fast version of We Will Rock You, before segueing seamlessly into Let Me Entertain You, an entertaining song about sex and drugs, From here on, the pace is relentless, taking in all the hits and a lot of stuff that would previously have been unknown to the unititated. The tension between the band and the behind the scenes is clearly evident with the tempo being much higher than normal, and a level of aggression in the music which is quite stunning at times. The beauty of this though, is that this never overspills into their interaction with the audience. This means that we get an incredibly heavy, tight, rock show the like of which are not really represented elsewhere in the Queen canon.

The concert is presented almost in it's entirety here, although there are still some bits missing. Their Performance of Flash / The Hero is missing from the film as they could not find the footage to restore. It is present on the CD though. Added in are several crowd shots, and the beginning of Now I'm Here which has already been missing before.

Unfortunately, the way Swimmer shot the concert still leads to some inherent problems. Whilst the band have done everything they can to restore the film, some problems do still occur. For example, when the camera are concentrating on a blistering performance of “I'm In Love With My Car” by Roger Taylor, Brian still gets in the way, and we still miss the transition as Freddie and Brian swap between Piano and Guitar on “Save Me”. However, to me the slightly haphazard camerawork enhances the sense of edginess that this concert has, and it is something that has kept me coming back to this concert time and time again.

Seeing the concert in it's entirety here also means we get to see stuff that is not available on any other Queen DVD to date. This was the last tour, for example, that Roger did his breathtaking Timpani solo - and that is included here alongside Brian's guitar solo in an early incarnation. These form a nice bridge before the hits “Bohemian Rhapsody” and “Crazy Little Thing Called Love” are rolled out. From here on, the concert gets even heavier, cumulating in an absolutely breathtaking version of Sheer Heart Attack, before finishing with the twin pillars of We Will Rock You and We Are The Champions.

To me, there is something pure about this concert. It is raw, it has a tension that drips off the screen, and it is just four superb musicians at the absolute peak of their powers delivering a powerhouse performance. The band that we see here are a very different one to the one we see at Wembley six years later, and if you are a Queen fan this is an essential for your collection. If you are a rock fan, then it will be an eye opener to see Queen in a different guise. To me, this is one of the releases of the year, and having seen it so many times on different formats - this is definitive.