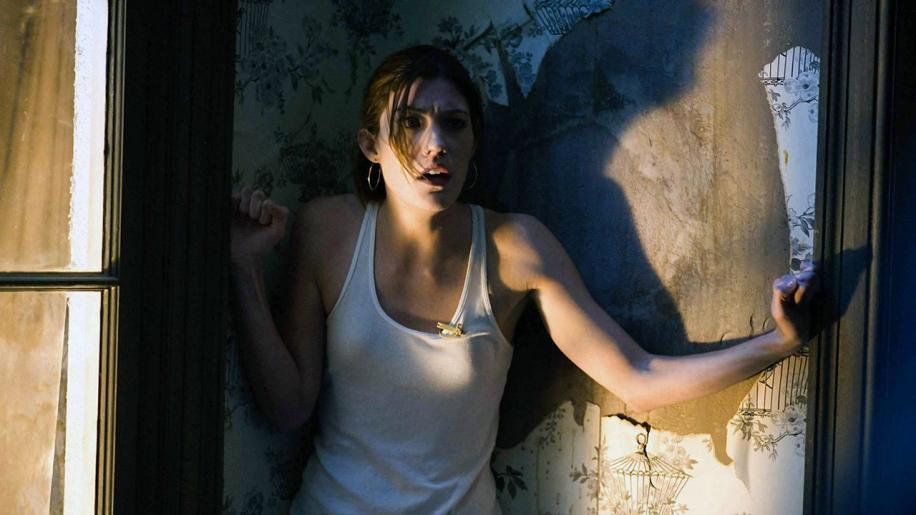 “Quarantine” is a remake of 2007 Spanish horror flick “Rec” (directed by Jaume Balaguero). “Rec” is one of the best horror movies I have seen since “The Grudge” (the Japenese original) and I was interested to see how the American remake would fare. I was also a bit taken aback at how quickly this remake was on the market as the original was a successful movie with plenty of critical acclaim. I thought that the memory of this movie would be allowed to fade prior to being subjected to a remake - apparently not!


The lead is played by Jennifer Carpenter who looks almost identical to Angela Vidal who played the same role in “Rec”. The role of the reporter in “Quarantine” is an emotionally demanding role with plenty of frustration, panic, hysteria and helplessness to be portrayed as the movie progresses. Carpenter (most famous for her depiction of Emily Rose in “The Exorcism of Emily Rose”) gives an almost ridiculous over the top performance here. While at times this super-hysteria seems plausible, for the majority it seems like complete over reaction and is generally an unbelievable performance (complete with scary shaky hands). The cast is largely unknown in “Quarantine”, apart from maybe Jay Hernadez (“Hostel”), who plays Jake the fireman and Rade “Boris the Blade” Serbedzija, playing the apartment block caretaker. John Eric Dowdle takes the helm on this movie although he must have spent most of his time with his feet up enjoying a few bottles of San Miguel as almost every shot is taken directly from “Rec” (and there's only one camera angle for the entire movie).


“Quarantine” is shot documentary style in the same fashion as “Blair Witch” and “Cloverfield”. Reporter Angela Vidal (Carpenter - with a nod to the Spanish original) along with trusty cameraman Scott Percival, are filming a documentary on the LA fire department and following them around for a night. As boredom sets in watching the firemen kill time, Angela and Scott become restless, as they desperately wait for a call to come through to give their story a much needed boost of excitement. These openings scenes are supposed to enamour us to the cast but just end up being boring filler. Eventually a call comes in regarding a disturbance involving an old lady (Ms. Espinoza) who is trapped in her apartment. The emergency response team, with Angela and Scott in tow, rush to the scene to find the police already there. Breaking into the old ladies apartment we see that she is not herself and promptly attacks one of the policemen tearing a chunk of flesh from his neck with her teeth. As the rescue team attempt to remove their fallen comrade to safety they find that the whole apartment block has been sealed off by the Center for Disease Control (CDC) and the LAPD with no explanation as to why the residents, policemen/firemen and Angela/Scott are being held prisoner.

In the meantime Ms. Espinoza (suitably drenched in blood) is looking for more victims upstairs, as the residents and visitors to the apartment building argue amongst themselves downstairs, trying in vain to devise an escape plan. With bodies bitten by Ms. Espinoza located in both the basement, and the upper floors, the trap is set. When these bodies start miraculously (well maybe not if you've ever seen another zombie flick) coming back to life and craving the flesh all uninfected are trapped in the middle. What ensues is a panicked upstairs/downstairs race for survival with interjections from the LAPD and CDC as they try to elucidate what is going on and also prevent any of the potentially infected escaping and spreading infection.

For the most part the hand held camera technique works well but there are moments when the cameraman falls and just “happens” to have a rabid infected in close-up shot - moments like this completely destroy the thin veil of realism that the movie uses to conceal itself. The camera work does however add to the claustrophobia with all action taking place inside the old apartment complex which also adds to the trapped feeling of helplessness. The infected, while frightening, are slightly unconvincing as frames have obviously been dropped to make their movements appear more zombie like but this doesn't really work and can look sloppy at times. The lack of a score in “Quarantine” (as it's “doc” style) potentially poses some issues with creating atmosphere. Luckily Dowdle has cleverly used ambient noise such as helicopters, sirens and the creaking of the apartment building in place of background music and these serve to almost distract the audience thus increasing the shock value of the attack scenes.

There are some pretty exciting and scary sequences, that although I knew were coming, still made me jump. The gore factor also seems to have been increased in “Quarantine” in place of the slightly more supernatural feel of “Rec”. Some of the scenes are very gruesome and, while appearing somewhat unnecessary at times, suit the movie and at least add a few minor changes over the original. With a short running time and the action kicking of after twenty minutes “Quarantine” is a fast paced movie that does try and break some of the mediocrity that we see so often in horror movies but ultimately there are simply not enough new ideas on show. As far as I am concerned the zombie genre has been almost drained of novel incarnations at this stage.

When I first watched “Rec” I didn't know any fine details regarding the storyline only that it involved zombies. When it emerged that the inhabitants of the apartment block were actually under a lock down it was a surprise and actually added to the intensity. However in “Quarantine” this fact is given away by the title with the complete sense of hysteria depicted by all characters appearing washed out and slightly hammy in comparison to the Spanish original.

Overall “Quarantine” is a weak adaptation (well copy really) of “Rec”. As is the case with the majority of Hollywood adaptations of foreign language films “Quarantine” simply does not work on many levels. For example, the hysterical babblings sound perfectly plausible and realistic in Spanish (as the language really enhances the fast pace), but in English the same dialogue sounds forced and simply doesn't convince. Carpenter pushes her emotional reactions to such a degree that they become somewhat unbelievable, and unfortunately some of the other actors can also be guilty of this at times. The cause of the viral outbreak in “Quarantine” is the result of a Doomsday cult trying to produce a new rabies strain (with a mini lab on the top floor of the apartment building) which will be used to eradicate the human race - a premise that we have seen all too often. A mediocre movie that has taken a perfectly good scare story and forced it into an American mould which it was not designed to fit. With a bit more effort to adapt this for the American market (rather than just blatantly copy “Rec” - even the original terrifying end zombie is identical) “Quarantine” could have been a much better movie. Unfortunately laziness seems to have produced an essentially English dubbed version of “Rec” with accompanying hammy acting which detracts from the experience. Worth a watch but my advice would be to get the original “Rec” instead