King of the mid-tier? 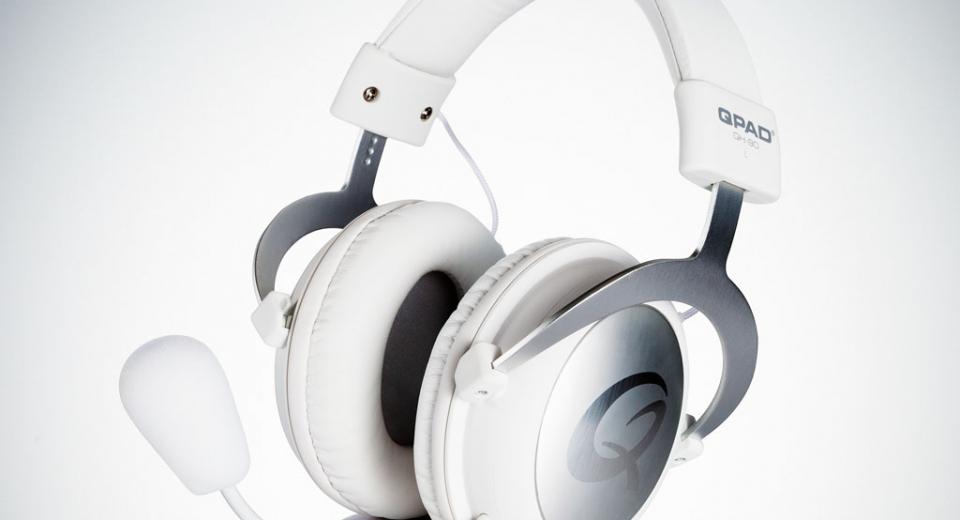 With the birth of 3.5mm audio jacks on the PlayStation 4, Wii U and Xbox One controller (via add-on adaptor), the case for investing in a decent gaming headset grows ever stronger. With so much time spent in late night multiplayer or loud social gaming on these new systems, a good set of cans with an attached microphone is an expense that quickly becomes rational, and especially so for anybody interested in maintaining healthy relationships with neighbours and loved ones. As such, the gaming headset market is booming in 2015, and completely awash with options from bargain bucket manufacturers through to high-end and hugely reputable audio companies.

Amidst that chaos, a handful of products usually bubble to the surface in any online discussion of gaming audio, and with that in mind, it's high time we took a look at the forum-goers' king of the mid-tier - the somewhat mythical QPAD QH-90.

Time and time again the QH-90 rears its head in discussions over best value gaming headsets, and on first glance it’s not too hard to see why. The technical specification is a cut above the average at this price point (£79.99 SRP when going to press), with 53mm drivers matched to a 15Hz-25KHz frequency response , a relatively robust 60 Ohm impedance and an attachable high-quality condenser microphone with fully positional arm. The QH-90’s closed-back design is also matched with the promise of deep bass and the sort of crisp highs so beloved of the gaming world, but QPAD maintains that the emphasis for the QH-90 is on clarity above all else. As such, there's no surround sound processing or other audio trickery here; just pure stereo.

QPAD’s stated mission with the QH-90 is to bring “Hi-Fi capabilities to the gaming world”, so let’s see if they deliver. What's in the box?

The QH-90 comes encased in high-quality packaging and an extremely sturdy box, and the whole thing smacks of a product that QPAD consider a flagship, or a statement of intent. The headset itself is packed into a snug-fitting foam mould, while a lower cardboard enclosure houses all manner of connectivity accessories, each of which is manufactured to an extremely high standard. The underside of the box is emblazoned with QPAD’s mission statement and guarantee of quality.

For your money you’ll be getting:
That’s pretty much everything you’d need for any given scenario of console, handheld, phone, tablet, PC or travel use. In practice I tended to just keep the 1m cable and 4-pole adaptor attached all the time for use on PS4, Xbox One, a tablet and my phone, while the extension cable and inline controls both found their way into a quick-connecting desktop solution for the PC. Handy. Of course all the convenience in the world would counts for nothing if the headset is of low quality or a poor fit, but again, QPAD’s attention to detail, high-quality manufacture and design deliver something special at this price point.

Finished in a pristine white (black is also available), the QH-90 sports a large circumaural design, with deep cushioning and a soft leather finish on each of its fairly large ear cups. Extending above each ear is a brushed aluminium fork that slots neatly into the headband, the rigidity of which bestows a much sturdier fit than the usual all-plastic design found in this segment of the market. The headband is finished in the same soft leather and cushioning material used throughout, while the QPAD logo is stitched neatly into the top with fabric.

Both sides of the QH-90 are identical besides a single recessed slot in the left earpiece, into which the detachable Microphone slots with a satisfying *thunk*. When the socket is not in use it can be covered with the aforementioned rubber bung, which is unfortunately just tiny enough to be easily lost behind a sofa or desk. In practice it’s far easier to simply bend the microphone up and out of the way, and just leave it connected at all times. Beware when doing this however, as there's no easy mute capability without connecting the extension cable with its built-in control unit (mute, volume, and a phone-compatible answer button all reside here). Without it, simply unplugging the microphone cable from the 4-pole adaptor is often the quickest solution when mid-game. In terms of practicalities, the QH-90 is a superbly comfortable and light headset. At 350g of evenly-distributed weight, it’s easy to forget that it's even on your head, and I found no problems at all when using it for sessions running up to three or four hours in length. The headband offers just enough malleability and positional adjustment to make for a comfortable fit, while the sturdy structure above each earpiece helps to maintain a clean seal around your ears. The deep earpad cushioning offers a comfortable distance between the grille and your lughole, while the soft leather finish actually served to cool down my head in comparison to the plush velvet favoured on many other headsets.

In short, the QH-90 feels fantastic in everyday use, and it exudes premium design in a market segment that often churns out plastic monstrosities. The included accessories and connectivity options are sensibly thought-out, although if I'm nit-picking, it could be argued that volume and mute controls would be better incorporated directly into the headset itself. The attached 1m cable is plenty long enough when you’re tethering yourself directly to a controller, and adding more just results in an easily tangled mess.

How does it sound?

To keep things consistent with other upcoming headset reviews, the QH-90’s were tested in four different practical usage scenarios that hopefully offer a good cross-section of their intended market. Music was sampled at various bitrates on a Samsung Galaxy Tab S 8.4 and Sony Xperia Z1, while a cross-section of different games, video and other services were tested on a PlayStation 4, an Xbox One, and a PC with a clean motherboard-based audio output. In all cases I sampled the QH-90 in its basic state, but also connected up the relatively cheap Fiio E11K headphone amp to add a little juice where necessary. I’d love to be in the position of testing these with something like Ed’s Chord Hugo, but I suspect I’d be the only person on the planet to be using such a combination.

So, with that out of the way, how does the QH-90 sound? Well, given QPAD’s marketing specifically mentions it being tuned for enhanced bass and a sharpened high-end in comparison to their more neutral-sounding open-backed QH-85, it’s unsurprising to see the QH-90 particularly suited to modern FPS and action videogames, but falling a smidgen short when used as general-purpose headphones. That's not to say the QH-90 is completely unbalanced however, and indeed for the price point it's a superb example of the quality that can be achieved. The likes of Battlefield 4, Shadows of Mordor and Destiny showcased the QH-90's best qualities. A relatively expansive soundstage allowed for good placement of environmental effects in each of those games, while the low-end kicked into life without a hint of distortion even at higher volumes. There's a good degree of bass to be found in the QH-90 (although less than most gaming headsets), but it never overpowers the experience; speech is well-defined and scales comfortably with volume, and while parts of the lower-mid range sound a little weaker than the rest of the spectrum, they're just prominent enough to avoid explosions and sharp dialogue raising their head above everything else. Playing through Telltale's latest Game of Thrones episode was a treat in that regard, with the QH-90 producing clear vocals that resulted in little fatigue.

The QH-90 also resolves plenty of detail for the price point and its closed-back design, and as such, watching Gravity proved a compelling experience. Effects were steered well, and while the QH-90 falls short of the presentation found in the likes of Blue's Mo-Fi or Sennheiser's upper-end gaming headsets, it's still excellently capable. Playing music was a little mixed, with several tracks on the Shatter soundtrack showcasing that low-end and upper-mid clarity to great effect, but a slight lack of warmth and balance making other genres fair less well.

Special mention also has to go to the QH-90's microphone, which offers excellent performance. Environmental noise is neatly filtered out during general gaming use, whilst the resulting audio is clear enough to be suited to Twitch streaming or recording quick voice-overs on a PC. It's not going to give you the performance of a dedicated USB-powered desktop mic, but for most, there will be little to complain about.

Although it might lack drive, refinement and balance to really bump it anywhere close to audiophile status, the QH-90 is nevertheless a thoroughly enjoyable headset for both gaming and movies. Effects and dialogue are crisp and clear, while bass is conveyed with impact but not completely overpowered in the manner of so many other units in this price range. It's comfortable, lightweight and well-designed, while the bundled accessories cater for pretty much every setup you'll need between PC, console and handheld.

In general, there's a clarity to the QH-90's audio presentation that belies its modest pricepoint. That crisp sound might take some getting used to if you're coming from the usual muddy and bass-heavy offerings within the gaming headset arena, but the change is thoroughly worth it. It's definitely a little too clinical to recommend for some genres of music, but for me, that's a worthwhile trade-off.