There's more to this NAS than just storage. 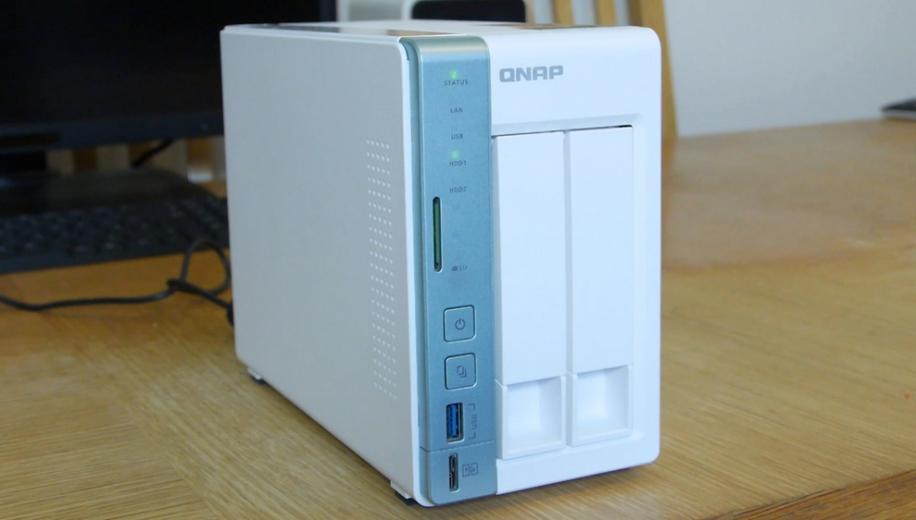 The QNAP TS-251A is a two bay NAS largely aimed at those looking for an all-in-one solution for storing and playing back their local media content, be that photos, music, movies or TV shows. For those not in the know, think of a NAS (Network Attached Storage) device as a low powered computer loaded with storage capacity, that is put on your home (or business) network for the purpose of delivering files and data to any other devices you might also have on that network. They could be a video or music streamer, a smartphone or tablet, a Blu-ray player or whatever you use for media playback. The QNAP TS-251A is of particular interest to us as it’s marketed as being ideal for home cinema lovers with the ability to play 4K video, a TV style remote control supplied in the box and an HDMI output among the connections. In fact, specs and target market wise, the TS-251A and TS-451A (which is the 4 bay version to the 2 bay model reviewed) are very much direct competitors to the ASUSTOR AS6102T and AS6204T we looked at earlier in 2016.

The TS-251A is powered by a 14nm Intel Celeron N3060 dual-core 1.6GHz processor and, as said above, comes pre-installed with 4GB of RAM although memory is expandable up to 8GB. The manufacturer claims peak throughput write speeds of nearly 212 MB/s and 195 MB/s read, using a dual Gigabit Ethernet connection, and slightly lower if you utilise AES-256 encryption.

Presumably to emphasise it’s a device largely aimed at the home user, the casing of the TS-251A is white. The build quality is fine but the unit feels surprisingly light weight and we’ve seen higher quality plastic deployed in similar devices. The same can be said for the included remote; the buttons aren’t especially well centred and levelled, the sound of their click isn’t very satisfying and nor is the amount of downward travel when you press them (yes, we are a bit obsessive about remote controls – it comes with the territory). That said, it’s functional and responsive enough and it isn’t an optional - i.e. paid-for - extra like it would be with some of the competition. The QNAP's IR port is compliant with other MCE remotes, however, and we also found that some wireless USB keyboards and mice/mouses functioned very well. The majority of connections are placed at the back of the unit and include, from the top down, a service port, 3.5mm audio out and in (there’s a Skype app, for one, if you were wondering) and an HDMI 1.4 port, which means Ultra HD/4K output is pegged at no higher than 30Hz. There are also a couple of USB 3.0 ports and dual (as in two) Gigabit Ethernet ports and, if your networking equipment is able to support link aggregation, could offer a good speed increase. At the front there’s an SD card slot and a couple of USB ports – one for attached storage and another which allows access to the USB quick access feature during setup. At the top of the front panel are power and disc drive indicator lights in addition to power and reset buttons. First things first, you’ll want to equip the TS-251A with some storage. The hard drive bays accept either 2.5 or 3.5” SATA HDDs. The bays easily click in an out with a mechanism on the bottom of them but you will need to get the screwdriver out to secure the drives to the docks. Our set-up was done using two 4TB Seagate 3.5-inch drives under a RAID 1 configuration with shared folders - a combination of SMB (Server Message Block) and NFS (Network File System) protocols for testing purposes. NFS is preferable for media shares as it has a lower overhead than SMB but we’ve found, especially with Android media hubs, that it’s more flaky than SMB and more difficult to set up for novices at the NAS end. There are various ways by which you can get the QNAP TS-251A up and running in your initial setup. If you’ve already wired the QNAP to your router/switch, and assuming its been given an IP address by DHCP, you can use the ‘Cloud’ method by entering a registration key in a browser; if it’s not connected to the network, you can use the supplied QFinder Pro utility software once you’ve hooked the NAS up your PC via USB; there other alternative is to connect the TS-251A up to your display, using HDMI, and carrying out the procedure in a more direct manner.

We could be here an awfully long time if we went in to great detail on what apps and features the QNAP TS-251A has at its disposal. Obvious applications include torrent clients, download managers, media servers and players, FTP servers, VPN (Virtual Private Network) software and other more business led applications such as content management systems, email servers and more but, given, the HDMI output and microphone input you can do things like use Skype or even monitor your security cameras using the Surveillance Station software installed. QNAP also makes quite a thing about its own Photo Station app which offers the obvious back-up solution as well as offering them to view through the cloud, wherever you have an internet connection. We’re most interested in the media player side of things, however, so besides the usual routine NAS duties, we’ve been most involved with the HybridDesk Station functionality with its umbrella of associated apps. Among the highlights of ‘HD Station’ are a Chrome browser, a Facebook app, Spotify, TuneIn radio and both PLEX and KODI. The PLEX app, via HybridDisk Station is the client variety but you can install a PLEX server independently on the QNAP to serve it, as well as any other PLEX client devices around the home – and even beyond. We did find the PLEX serving capabilities a bit of a let-down, however, when transcoding video and audio on the fly with full Blu-ray rips, especially, with frequent buffering and stuttering when delivered to clients. With transcoding off, i.e. original quality selected at both ends, performance was really good, however – especially with devices on a wired connection, so you’ll need to weigh up how much that feature is important to you.

At one point during the review process, our favourite media software, KODI, disappeared from the roster of available apps altogether but, on latest software (QTS4.2.2 Build 20161208) it’s back and working very well under the limitations of the chipset. The biggest drawback, going forwards, is the lack of 10-bit HEVC support – at any resolution – and nor is there any likelihood of 3D ISO or MVC ever working. On the plus side, the TS-251A was perfectly capable of switching refresh rates at 24/23.976, 25, 30/29.97 and 60/59.4 and 50Hz at all resolutions. The QNAP also strolled through all our 4K/Ultra HD files bar 10-bit HEVC encodes but 8-bit HEVC proved no problem whatsoever, although it's debatable if that's of much practical use. In terms of support for audio codecs, the QNAP TS-251A performed very well through KODI. You need to ensure the audio output device is set to HAD/Intel PCH/HDMI and that you have Passthrough enabled in the System > Audio settings and then everything should play fine. The QNAP passed through DTS 5.1, HD-MA and HD-DR up to 7.1, as well as Dolby 5.1, Dolby Digital+ up to 7.1 and Dolby TrueHD also up to 7.1. The results would indicate that Dolby Atmos and DTS:X pass-through should also be possible, although we can’t guarantee it.

Despite the impressive results, in more general terms, we’re not altogether sold on the merits of a NAS as a media player. Even a two bay example - such as the QNAP TS-251A - is still a relatively bulky box to accommodate, especially compared to some of the tiny little media hubs we see. It doesn’t look great on a typical TV unit and, placed in front, would likely cut-off a lot of screen while placing behind, which is what we did, means you’ll probably have to move the TV forwards by a few centimetres and then you need to ensure line of sight for the remote – if that’s what you’re going to use. On the other hand, a large, well ventilated unit would suit the QNAP, stowed somewhere on a shelf where its appearance wouldn’t be an issue. In terms of noise, the fan is very quiet so that’s not an issue but there’s not much in the way of insulation against the sound of mechanical disc drives clicking and whirring away. Given the price rise in solid state storage, they’re probably not a feasible option for most, at least in the short term.

We tested read and write performance by sending a 4GB video file back and forth between our Windows 10 PC and the NAS, over a wired (single – our router doesn’t support link aggregation) gigabit LAN connection from our Windows 10 PC direct to a gigabit port on our router as well as an Ethernet switch; we also used Wi-Fi over a 5Ghz 802.11ac connection and a set of Devolo dLAN 1200 powerline adapters. The most notable results are over the wired connection as it takes out the variables inherent in powerline, and especially, Wi-Fi. Read speeds over the wired connection were extremely impressive with an average of 111MB/s, meaning a 4GB file could be transferred in under 30 seconds, while transferring the other way was a bit slower, but still fairly rapid, at around 95 MB/s. Over powerline, we got an impressive 49 MB/s read and a slightly less impressive 36 MB/s write, while our (generally very stable) 802.11ac wireless connection saw speeds of 11 MB/s read and 14.5 MB/s write. All of which goes to show that, if you’re even vaguely serious about a fast and stable networking environment, the very minimum you should be doing is investing in a decent set of powerline adapters, if you’re unable to run a cable direct; wireless seems very pedestrian in comparison.

In slightly more general terms we did note a dip in performance when the TS-251A was tasking with more than one device. For instance, when using the NAS as a mounted network drive in Windows to simply write and save MS Word documents to, downloading files would take significantly longer than it would when not doing so. There were no issues sending simultaneous 1080p video to up to four (hardwired) devices, however, so it seems dependent on what we were asking the QNAP to do. We’ve fed the information back to QNAP so hopefully they can take a look at the multitasking capabilities of the TS-251A.

The QNAP TS-251A combines its duties as a networked attached storage device and a (virtually) fully fledged media player with a good degree of success. The all-plastic casing, styled in white reflects its designation as a NAS primarily aimed at the home user, although it would be suitable for small office use, too. Also present to reflect its purpose of domestic use is an HDMI 1.4 port and the HybridDesk Station features which includes such apps as Facebook, YouTube, Spotify, PLEX and KODI. With the latter, media playback capabilities were very impressive, in fact, although the lack of 10-bit HEVC support in the chipset may present issues, going forwards. Still, it ticks most of the boxes with flawless frequency switching, 4K output up to 30Hz and the pass-through of HD audio codecs without issue. Read and write speeds over our Gigabit network were also very good with the only question mark over the TS-251A being a seeming lack of ability when asked to multitask in certain ways. All in all, however, the QNAP TS-251A justifies both its price-tag and its place in an ever growing market.