Give your low-end a shot of B12 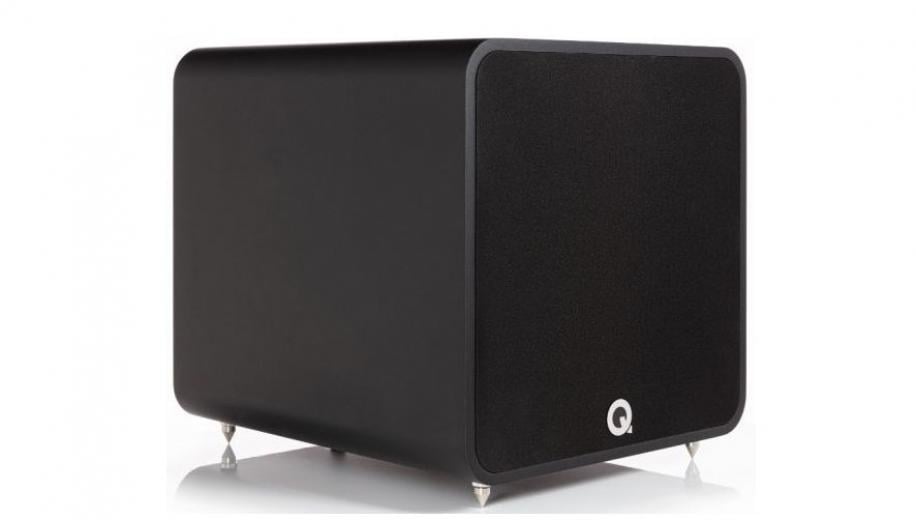 What is the Q Acoustics Q B12?

The Q Acoustics Q B12 is the company’s first subwoofer to feature a 12-inch driver. The idea is to offer an alternative to its slimline models with a bigger and more powerful sub that can provide a solid bass foundation to the existing Concept and 3000i Series speaker ranges.

To achieve this, Q Acoustics has combined this 12-inch long-throw driver with an ultra low-distortion 220W Class D amplifier and a 50mm voice coil for minimal thermal compression. All this is contained in a sealed ‘infinite baffle’ cabinet with added bracing.

There’s a choice of black or white in matte or gloss finishes, with the matte versions costing £499 as at the time of writing (March 2020), and the gloss models setting you back £649. There’s some tough competition at these price points, so let’s see if the B12 has taken its vitamins.

The Q Acoustics Q B12 uses a traditional cubed shape, as opposed the company’s more unusual slimline models with their smaller side-firing drivers. Instead, the Q B12 takes the ‘route one’ approach with the big forward-firing 12-inch driver dominating the baffle and covered by a black fabric grille.

The cabinet itself neatly encapsulates the driver, amplifier and electronics, and uses curved-edge styling that looks attractive but makes the sub surprisingly difficult to handle. The Q B12 uses reinforced MDF with a 36mm-thick baffle that’s braced to provide maximum stiffness to its motor system. This sub certainly feels well made, and the cabinet is impressively inert for the price.

The cabinet is attractively designed, well made and suitably inert for a sub of this price

The Q B12 measures 400 x 400 x 446mm (WxHxD), weighs in at 18.5kg and offers a choice of four finishes: gloss black, gloss white, carbon black and arctic white. In the box you’ll find four adjustable floor spikes and locking rings, along with covers if you don’t want to put holes in your wooden flooring.

The Q Acoustics Q B12 houses its connections and some of its controls in a recessed area at the rear. There’s a metal cover that remains in place with magnets and keeps things tidy, although if you leave it on you will need to run the cables down through a hole at the bottom.

In this recessed area you’ll find a socket for the two-pin power cable and an on/off switch. There’s also a switch for changing the phase from 0 to 180˚, and another for selecting on or auto, with the latter activating the Q B12 when it receives a signal.

The only connections are a pair of RCA line level inputs, one of which doubles as a mono/LFE input. Above the recessed area are two rotary dials for level and crossover, both of which remain visible when the metal cover is in place.

The Q Acoustics Q B12 keeps things simple in terms of its features and specs, but that tends to be the company’s modus operandi when it comes to speaker manufacturer. Q Acoustics focuses primarily on simple, effective and well-made designs that deliver performance and value.

The Q B12 uses 12-inch (305mm) high-excision driver with a stiff paper and straight-sided cone. The Class D digital amplifier is rated at 220W with peaks up to 440W, and the sub has a claimed frequency response of 28-300Hz.

The Q B12 doesn’t have any onboard EQ, but these days any decent AV receiver should be capable of handling the integration of the bass and mitigating for the negative aspects of the room. While this sub has primarily been designed to complement the Concept and 3000i Series, you don’t have to partner it with Q Acoustics speakers.

The Q Acoustics Q B12 is extremely easy to set-up, mainly thanks to its simple connections and controls. In terms of wiring the sub you simply run a cable using either a single mono/LFE connection or a stereo pair for the line level input.

This sub is very easy to setup, mainly because it has minimal connections and control

Then all I needed to do was set the phase correctly, select the appropriate crossover for LFE and adjust the level accordingly. The only other setting is the on/off switch for the auto standby feature, which you can simply leave on.

Initially I tested the Q B12 with four Q Acoustics 3010i bookshelf speakers and a 3090i dedicated centre speaker. After that I ran the Q B12 with my reference MK S150 speaker system, just to see how it performed with a different manufacturer.

The Q Acoustic Q B12 immediately reveals itself to be a very capable subwoofer, although its delivery is often at odds with its fairly large appearance. When you first set up this sub, the size of the driver and the weight of the unit suggest a fairly beefy performance, but the Q B12 is a lot more subtle than I was expecting.

I don’t mean that in a negative way, too often subwoofer manufacturers confuse overpowering bass delivery with the kind of well-integrated low frequency foundation that most systems actually need. You don’t want the bass to swamp the overall balance of the other speakers, and most of time it shouldn't draw attention to itself.

When combined with the four 3010i bookshelf speakers and the 3090i centre speaker the result is a balanced system where the Q B12 supports the other speakers, filling in the lower frequencies where necessary. It feels completely organic, with the sub weaving its way through the rest of the system with a delivery that’s effortless.

The bass delivery is subtle (in a good way), highly articulate and very responsive

Unsurprisingly for a sealed sub, it's also very responsive with an articulate performance and a fast delivery that allows the Q B12 to complement and enhance the 3000i Series speakers. As a result, the entire system is equally as impressive with both music and movies, and the overall impression is of a sub designed to integrate with a system rather than dominate it.

Bohemian Rhapsody gives the system a chance to show its full potential, and the Q B12 hits the percussive kick of Roger Taylor’s drums with exacting precision. The underlying foundation of bass ensures the weight of the crowd is felt, giving the Live Aid sequence a sense of scale. It’s a delicate rather than brash performance, but it integrates with the system perfectly.

The subtly of the Q B12 works best with soundtracks that are trying to create a cohesive soundstage, rather than simply kicking your front teeth in with a tsunami of bass. Having said that, a bass-heavy flick like Zombieland: Double Tap still sounded fantastic, with every over-the-top sound effect hitting like a well-timed sledgehammer.

The Q B12 also worked well with my reference MK S150 setup, although I did feel that the larger speakers in this system would have benefited from a touch more low-end extension. Most of the time the sub simply got on with its  job but on occasion, when it was required to dig really deep, the lack of brute power was evident.

This was particularly true during Godzilla: King of the Monsters, a film with a soundtrack that employs titanic amounts of LFE. The sub still gave the battling behemoths a sense of epic scale, but there were times when I knew a REL or SVS subwoofer would have rattled the foundations in a way the Q B12 simply isn’t capable of doing.

However, unless you’re the kind of person who doesn’t care about their neighbours or simply isn’t happy until a sub has liquidised their insides, the Q Acoustic Q B12 is a great budget model. It gets the basics right and it delivers a subtle but solid low-end foundation that is not only ideal for the 3000i Series, but also any other sensibly-priced system.

The Q Acoustics Q B12 is an accomplished subwoofer that does what it was designed to do: boost the low-end performance of the company’s Concept and 3000i Series speakers. When I reviewed the latter as a 5.1 system, I singled out the included slimline sub as the weak link, and the new Q B12 certainly goes a long way towards addressing that model’s limitations.

The new subwoofer sounds bigger and deeper than previous efforts from Q Acoustics, but it’s also more effortless in its delivery. The Q B12 integrates perfectly with the 3010i speakers, creating a balanced low frequency foundation. It’s also a very responsive design, revealing plenty of speed that ensures both music and movies sound equally as good.

However, while the Q B12 delivers deeper bass compared to its predecessors, it lacks the more seismic presentation of certain competitors. The Q B12 sometimes felt a little lightweight when used with my MK system, and I found myself missing the slam of more powerful subs. It’s also a surprisingly simple sub in terms of connections and control, although this might appeal to many.

The £150 premium for the gloss version is hard to justify, but the matte versions are competitively priced, and make this capable subwoofer a cracking choice for those looking to beef up the bass on their system. The Q Acoustics Q B12 certainly does enough to earn a recommendation, especially for those already invested in one the company’s excellent budget speaker systems.

The obvious alternative is the BK Electronics P12-300SB-PR. This sealed subwoofer not only has a forward-firing 12-inch driver and matching downward-firing passive radiator, but also a set of connections that includes high-level inputs. The BK might not win any beauty contests, but it has slightly more power thanks to a 300W amplifier and it’s capable of dipping below 20Hz. At £450 there really is nothing else that comes close for the money, which is why it won a Best Buy badge.