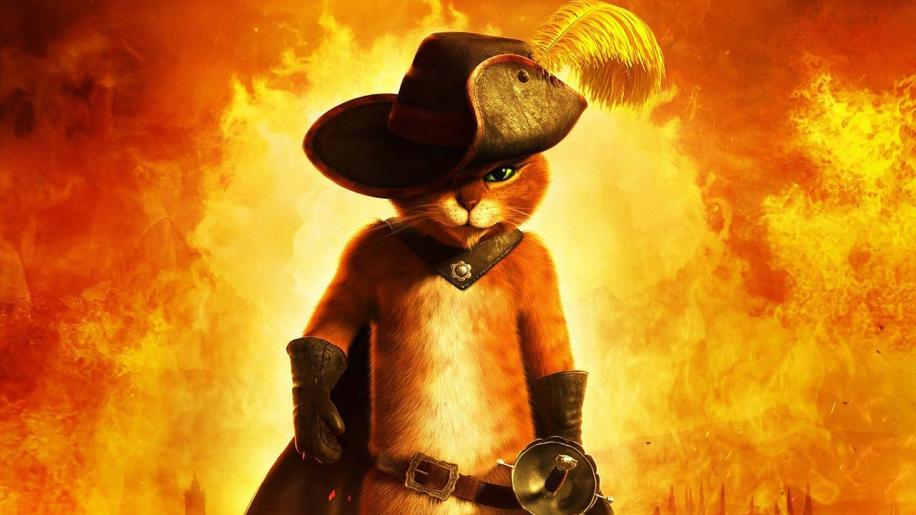 I was really looking forward to watching ‘Puss in Boots’, out now on American Region free Blu-ray. I mean to say, it came from those awfully nice folks at Dreamworks who gave us the Shrek series so it stood to reason that it would be full of gleeful gags and jolly japes in the land of Far, Far Away. Fun for all the family, in fact. Isn’t life just full of disappointments these days?

‘Puss in Boots’ has all the hallmarks of superb animation that we’ve come to expect from Dreamworks and more nursery rhyme characters than you can shake a stick at, but is it funny? I’ll get back to you on that last point.

Once again, Puss is voiced by Antonio Bandyarse (sorry, that should read Banderas) and this time he’s out on his own without his big green Ogre pal and the wise ass Donkey. You see, this all takes place before he arrives in the land of Far, Far Away.

We get to hear of his childhood friendship with Humpty Dumpty that turned sour (or got scrambled) during the quest for those Magic Beans and the search for the goose that laid the golden egg – or in this case many eggs.

We’re treated to the climb up a beanstalk, risking the Giant and the ultimate double cross. Did you realise that Jack & Jill were actually a pair of case hardened career criminals? You didn’t? Boy, are you in for a shock! It’s a bit like learning that Santa Claus was gored to death by one of his reindeer – but that’s another story.

The love interest is supplied here by one Kitty Softpaws (voiced by Salma Hayek) as a smart and sexy female Cat burglar. Puss himself, is a flawed hero in the Zorro mould who has his life turned upside down by betrayal.

So, is the film funny?

I really hoped that it would be, but the movie spends its 90 minutes duration doggedly (cattily?) telling the story and focussing on daring deeds in an amusing manner – so much so, in fact, that it forgets to deliver any real belly laughs. Plenty of smirks, smiles and fairytale references – but a bit light on the real gags. Come back Mike Myers, all is forgiven. Holy smoke, this is meant to be fun!

The animation is quite simply stunning and the direction keeps the tale (tail?) moving along, but I genuinely felt that it was rather a long 90 minutes. There’s enough running around, shouting and screaming from the characters to keep younger kids interested, but for children of over the age of 21 it kind of feels as if you’ve seen it all before. There’s nothing new or original to be seen, so the mind becomes numb to the visuals after a while due to lack of stimulation. The problem appears to be that Dreamworks has set such a high benchmark in the past, that it’s difficult for them to maintain or make every film better than the last. Victims of their own success, you might say.

This takes me on to much of the product from last Summer’s cinema release, now arriving on Blu-ray. I’ve felt a real disappointment in most of the big movies from that period that had so much going for them in terms of talent and budget, yet they failed to deliver on the entertainment front. Could it be that the film makers have forgotten how to make a good movie – or are they more interested in producing a lucrative sequel, regardless of the actual quality of the film? Could it be that, with regard to recent movie releases (as in Fairytales), you have to kiss a lot of frogs before you find a beautiful Princess? It certainly seems that way.