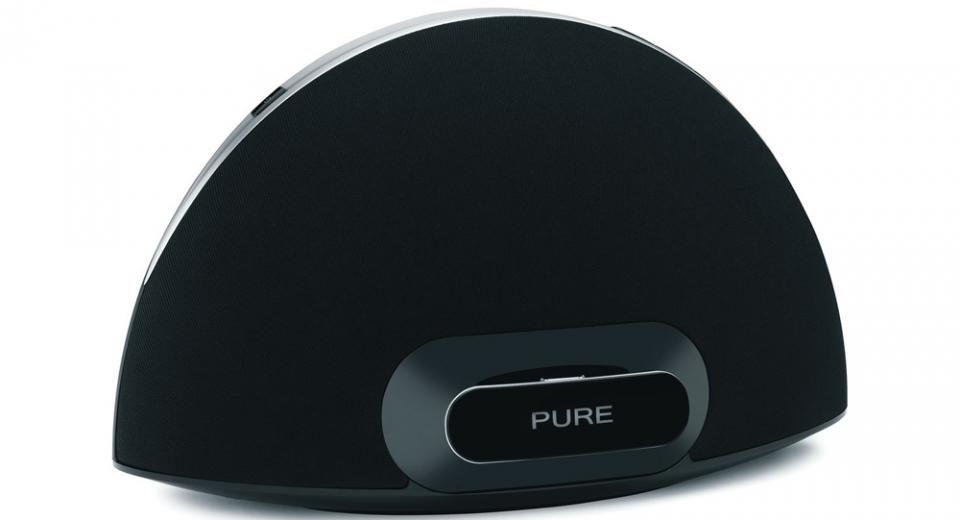 Pure are best known for their extensive range of digital radios but they have been stretching their legs in product terms over the last few years and the Contour range of docks are built around the iDevice while other products combining DAB, iPod functionality and other connections are also available. The Contour 200i Air is the latest arrival in the range and as the name suggests is equipped with Apple AirPlay, the only dock here so fitted.

AirPlay allows the Contour to wirelessly receive the signal from any suitably equipped device on the same network. Not only is this convenient, with the ongoing rumblings that next generation iPhones may dispense with the classic “dock” connector, this is the only design here that is likely to have you covered in the event of this being the case. The Contour also has a conventional dock mounting for older iPods and for charging your iPhone - AirPlay is an extremely clever feature but it remains a battery intensive activity.

The unique attributes of the Contour don’t end at AirPlay. Lurking around the back of the dock is a coaxial digital output which is an unexpected but welcome feature. You can (and being the “enthusiast” I am, I checked), reduce the speaker output to zero and use the Pure as a sort of “AirPlay hub” and iPod transport into any system with a digital input. This is some unusually forward thinking for what is most usually viewed as a standalone one box device and could be a very cost effective upgrade to an existing hi-fi system.

The final aspect of the Contour that differs from the other decks here is not on the dock itself but instead is available through your iDevice. This is the Lounge, music on demand app. This takes the form of both radio stations playing a continuous stream of music over various genres or specific artists. There are also podcasts and the slightly more unusual choice of ambient sounds. More than any other manufacturer here, Pure is intent on creating an “eco-system” that the Contour operates in.

The physical design of the Pure is solid rather than spectacular. The Contour is a semi-circular chassis with the dock itself mounted on a small “balcony” at the front. At the moment you can have any colour you like as long as its black and this makes the Contour look a little dark compared to some of the competition. As with most of the docks, standby and volume controls are physical buttons on the unit while a remote is also supplied with more functions. This is small and easy to mislay but given your iPod and iPhone will also act as a remote, perhaps not as vital as some of the other docks here. The most colourful part of the design is the front display light that can (and will) go a bewildering variety of colours depending on what the unit is being asked to do at the time.

Internally, the Pure uses a pair of “full range” drivers rather than separate mid bass and tweeters. This can have the advantage of sounding more cohesive thanks to the lack of crossover but can also, on occasions, lack a little sparkle compared to designs with dedicated high frequency drivers. Much depends on the implementation and Pure has considerable experience in this area.

The fit and finish of the Contour is good and the unit feels solid and well thought out. The quality of the materials used is of a high standard throughout and nothing feels flimsy or poorly implemented. There is a feeling that logic wins out over aesthetics in many areas. The placement of the buttons is more obtrusive than some of the other designs but if you suddenly need to reach for the volume control, you don’t have to hunt around for it. If the grille cloth was available in a few other colours, the Contour would be more attractive without changing any other materials used. The external power supply is not huge but will still need to be taken into account if you are going to put the Contour on a shelf or in an alcove.

From the outset, the Pure is a very distinctive sounding performer. The use of full range drivers makes for a performance that is subtly different to the models with separate tweeters. Give the Contour a piece with a huge amount of top end detail and it can seem to lack a little sparkle compared to some of others. The payoff is in terms of the midrange where the performance is really very good indeed. There is a control and realism to instruments and most vocals that is genuinely excellent and gives some indications why people will choose single driver speakers despite the known drawbacks.

The timing of the Contour is essentially neutral. It doesn’t sound sluggish or lazy but equally it doesn’t have the toe tapping involvement of the Monitor Audio when playing more upbeat material. This behaviour, combined with the slight sense of warmth that comes as function of the slightly rolled off top end makes the Contour a very relaxing and refined listen but perhaps not the most exciting participant in the test.

With two 3.5 inch drivers, each with its own relatively large bass port, the low end response of the Contour is pretty effective. There is good detail and texture to the bass and it keeps up nicely with faster paced music. It still doesn’t have the absolute low end shove of the Sonoro or Tangent but for a relatively small chassis the performance is convincing enough. The claimed figure of 18 watts per side seems entirely believable and the Contour will provide a convincing sound in a normal sized UK listening room. The stereo separation is a little less convincing however and the Contour generally always sounds like a single speaker rather than a stereo source.

The biggest attraction of the Pure Contour is AirPlay. After actually controlling what you are doing with the iDevice itself, every remote control by contrast is going to seem a little bit pointless. The good news is that the plus points of the Contour don’t end there. It has a warm and inviting sound, good build quality and some other potentially interesting features including the digital output and Pure Lounge feature. Some listeners might want a little more excitement (both sonic and visual) but this is a fine performing piece of equipment that is exceptional value for money.