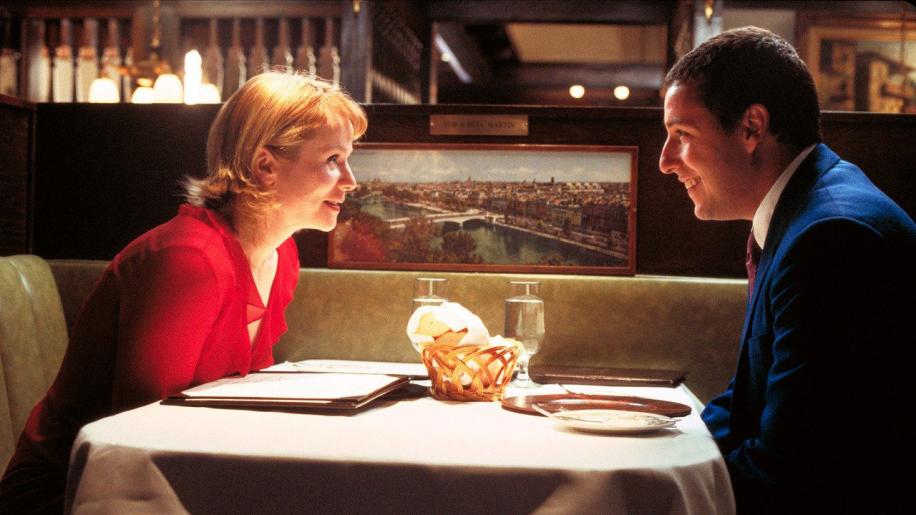 “Punch Drunk Love” is a very unusual and quirky take on the romantic comedy. Director Paul Thomas Anderson (Boogie Nights, Magnolia) said in a recent interview he wanted to experiment with the genre and that's exactly what he has done. The film starts off like its main character Barry (Adam Sandler), it is disjointed, confused, anxious and hot tempered. It struggles to pull you into the story and you feel a little awkward with the character and the things going on around him. But when Lena (Emily Watson) suddenly appears, everything just seems to click into place and the movie begins to feel warm and inviting. Barry has problems however, he phoned a sex chat line and now there are people after him and his money, he has seven sisters who torment his life, he has a business making toilet plungers which is doing ok and now he is buying Healthy choice chocolate pudding so he can redeem the air mile tokens, but he never goes anywhere. Telling Lena these things might ruin any chance of happiness so he does his best to fight back and get rid of his demons. Mind you smashing his sisters patio doors and then a restaurant toilet in one of his fits of rage, and the fact he breaks down crying for no reason at all might hinder his chances.
The movie is different in everyway with the cinematography and direction being first class. It also gives Sandler his best performance yet, deep, confused yet charming and funny. Emily Watsons character is very convincing as the love interest, but her reasoning for wanting Barry seems to be the only weak spot in this tale. But she makes the relationship between Lena and Barry work very well, and there is a certain chemistry there. The comedy however is very funny indeed and without any of the usual slap stick elements, instead it is human and compelling humour as two odd characters find love. It might start out disjointed but “Punch Drunk Love” is funny, heart warming and disturbing with just the right amount of oddness to make it very enjoyable.