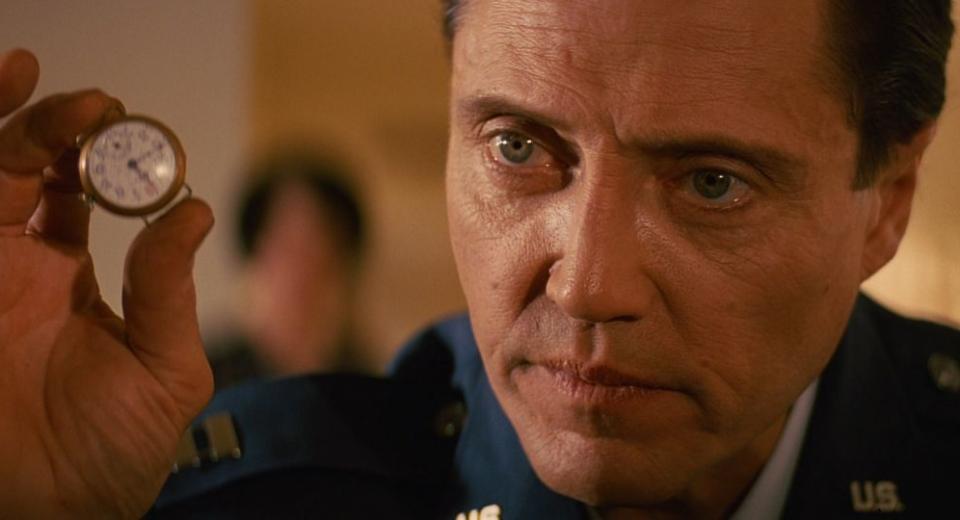 Continuing our look at some of the Greatest Films of All Time, we move through the American Film Institute's Top 100 List to reach Pulp Fiction, Quentin Tarantino's 1994 masterpiece which, somewhat shamefully, has never been covered on this site.

Known for its relentlessly quotable dialogue - rich with razor-sharp wit and incessant pop culture references - for its iconic characters and unforgettable shots; and for its stunning blend of striking, unflinching violence, and ironic humour; for its non-linear narrative and the distinctive style pervading throughout, Pulp Fiction ushered in a new era of crime dramas, with endless imitators but no equals, even from Tarantino himself.

Back in the early nineties, before Tarantino had been established as a household name, the now-acclaimed director/writer/actor conceived a film trilogy with overlapping characters, each part to be written by different scribes. Although the full project would never quite reach fruition in the way that he had originally envisaged, Tarantino would release his entry – Reservoir Dogs – to critical and commercial success; his breakthrough in the film industry. Before its release, however, he went to work on perfecting the second entry, with a central story crafted by writer Roger Avary.

It was not the first time that Tarantino had worked on a story by Avary, a man who is now probably better remembered for serving a prison sentence for vehicular manslaughter a few years ago. Avary had originally written the story that, through Tarantino’s embellishments, would go on to become the basis for Tony Scott’s True Romance, and he did the same here, writing a story called “Pandemonium Reigns” – basically the story arc revolving around the gold watch – which Tarantino would take, adapt, and forge into what we now know as the crime classic Pulp Fiction.

Whilst Avary would share the joint credit with Tarantino when it came to the Best Original Screenplay Oscar that they were awarded, his career would go downhill almost as quickly as Tarantino’s soared. On the one hand, this is something of a tragedy, but on the other, perhaps the most important aspect of all the stories they worked on together was the dialogue – something which was largely contributed by Tarantino himself.

“He hid it in the one place he knew he could hide something: his ass.”

Having Avary on board perhaps reined him in too, as, whilst Tarantino has gone on to craft several impressive features – from Jackie Brown to Kill Bill; from Inglourious Basterds to Django Unchained – he has never quite achieved the perfection that he did with Pulp Fiction. Despite its epic runtime, this was his leanest, most refined work. There wasn’t a wasted second.

Casting was also a work of genius. Not only did he cast players who were perfect for the parts, but he also single-handedly rejuvenated a whole bunch of actors whose careers, for one reason or another, had been in limbo at that time. Now any and everybody wants to work with Tarantino, but back then it was a gamble which well and truly paid off.

The central part of the boxer, Butch, could have actually been the comeback role of the Century for Mickey Rourke, had he not turned it down. He had to wait over a decade (for 2005’s Sin City and then 2008’s The Wrestler) to rectify that mistake. In the meantime, Bruce Willis got the career surge instead, which was much required at the time. Despite the fact that he’d only just achieved A-list status with 1988’s Die Hard, Willis truly struggled to find his footing in his first few years, churning out over half a dozen box office duds (even the underrated The Last Boy Scout flopped badly), and only surviving on his Die Hard glory (through Die Hard 2) all the way through until Pulp Fiction. After playing the lead character of Butch, Willis finally started getting more interesting offers – not just comedies or action films, or action-comedies, but a slew of other difference roles; his dramatic weight in Pulp Fiction, whilst not exactly Oscar-worthy, proving that he had more to offer than just wisecracks and gunplay.


“Oh, I’m sorry, did I break your concentration?!”

Through a part which Tarantino wrote specifically for him, Samuel L. Jackson would finally achieve A-list stardom, despite having already been in the business for almost 20 years. He’d even already spouted the words of Tarantino – as written for his True Romance part a year earlier – but it was his role of Jules, ‘the Preacher’ in Pulp Fiction that saw him finally internationally recognised and critically acclaimed (earning a Best Supporting Actor Nomination for his troubles). Indeed in the almost-20 years since Pulp Fiction he has done over 100 movies, ten times the number of movies that he did in the 20 years preceding it, and he’s still going strong well into his 60s, with Avengers’ Nick Fury.

Uma Thurman has never quite capitalised on the success that any of her Tarantino collaborations afforded her, but she’s undeniably superb here as the cool-and-sexy Mia Wallace, arguably her best role ever. She may have kicked ass and taken names in Kill Bill, but she proved herself to be effortlessly cool here, over a decade earlier.

Indeed Pulp Fiction immortalised numerous actors with their iconic portrayals, but it also saddled them with a benchmark that was impossible to beat. From Tim Roth – returning after his Reservoir Dogs collaboration with Tarantino – to Eric Schultz; from Amanda Plummer to Ving Rhames, who, despite being good in films like of Out of Sight, was never as cool as here, playing Marcellus Wallace; from Rosanne Arquette to The Last Temptation of Christ’s Harvey Keitel. A long-time admirer of Keitel, Tarantino gave him two of his best roles; the actor, who trained in the same acting school as De Niro had one of the best cameos of all time as The Wolf (although he does have to compete with the excellent cameo from King of New York’s Christopher Walken).

Then there’s the ultimate example: John Travolta. In a role which Reservoir Dogs’ Michael Madsen would eternally regret not taking up, Travolta’s dead-in-the-water career would be instantly revitalised, and he too would struggle to find anything anywhere near as good, despite profiting more than most with a succession of impressive turns in films like Get Shorty and Face/Off.


“Any of you f**kin’ pr*cks move and I’ll execute every mother**king last one of you!”

Despite its seemingly countless imitators, Pulp Fiction would remain both distinctive and utterly timeless. Tarantino would fashion a film that appeared to be almost devoid of placement in any specific era, incorporating classic cars, classic sets – like the 50s Jack Rabbit Slim’s diner – and iconic outfits (the black suits and skinny black ties) into a movie which defied association with any specific decade. To this day, Pulp Fiction doesn’t feel dated, and the set and costume design contributed no end to this.

In addition, Tarantino tried something new with the score – he had none. There is no score, just a series of perfectly-chosen song tracks that play out over the movie, often incorporated diegetically through one of the characters flipping on a record. From Girl, You’ll Be a Woman Soon to Son of a Preacher Man, the stunning blend of little-known gems pooled together to form the ideal backing to the on-screen exploits; effortlessly marrying up with the dialogue, whilst similarly blurring the line as to which era Pulp Fiction was supposed to be associated with. It was one of those supremely popular soundtrack albums which was played to death – rinsed – by millions of fans in the decades since, but which remains utterly inseparable from the filmic masterwork.

Despite the budgetary restrictions – Tarantino had just over $8 Million to play with – the end result would look far classier than you would think possible for that sum, and would go on to reap almost a quarter of a billion at the Box Office. It would shift the dynamic in the cinemas once again, reaffirming the idea of clever, adult features which dared to take risks with subject-matter, violence, language and intention. It criticised the paint-by-numbers productions that Hollywood was churning out at the time, becoming an instant yet endearing classic in the process, and making big studios sit up and take notice of smaller independent features once again. As such, it is clearly one of the most significant films of all time. But perhaps more importantly, it’s also one of the greatest.

Utterly entertaining, endlessly quotable, blisteringly stylish and daringly different, Pulp Fiction easily sits in the rankings of the Top 100 films of all time, not only with the AFI, but also likely with most people on the planet.