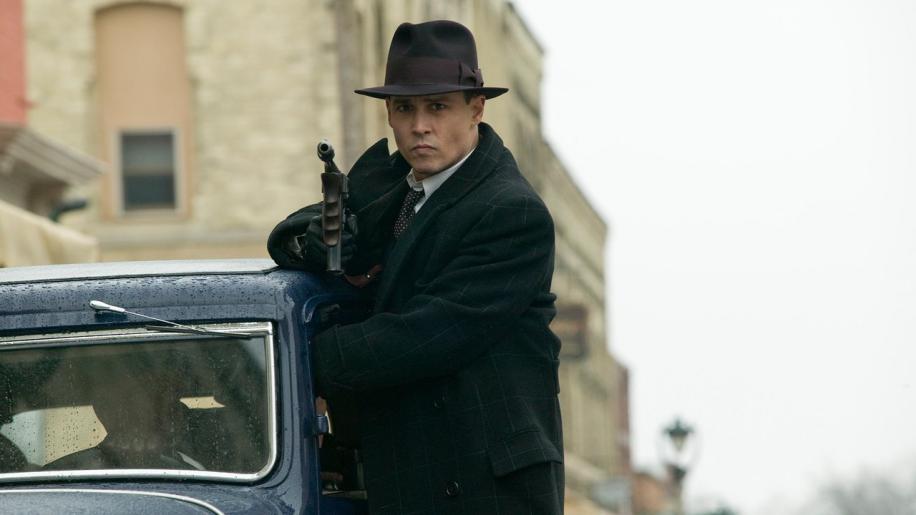 The name of John Dillinger will be familiar to anyone who is a fan of gangster movies set in the 1930's and when thinking of that genre, we typically visualise the black-and-white Warner Bros movies starring James Cagney, Humphrey Bogart or Edward G. Robinson. Now, when director Michael Mann ( 'Heat', 'Ali') had $80 million to spend on re-telling the Dillinger story, he decided to take away the Hollywood gloss, glamour and glitz to take us to 1933 rather than bring the Great Depression era to us. By that I mean he wanted to make it appear immediate, 'happening' or 'now'. To achieve this, he threw away 35mm film and replaced it with the clinical look of High Def digital and, rather than shoot everything in the relative comfort of a Film Studio he chose to make it on location, but not just any location. He used the actual places where the real life events in the Dillinger story took place. You can't get more immediate than that.

Throw into the mix two current Hollywood big names - Johnny Depp (Pirates of the Caribbean) and Christian Bale (Batman Begins) - and you've got a premise that should raise enough interest to put bums on seats.
'Public Enemies' was released in the UK cinemas at the same time as we had giant transforming robots doing battle, Will Ferrell plying his wares as well as the return of Captain James T. Kirk to the big screen. So amid all of this lighter fare, how would a movie in a more serious vein be taken? A movie that actually required us to think - as well as accept a new kind of visual styling applied to an established genre.
Answers on a postcard, please....

John Dillinger (Johnny Depp) began his career in crime by robbing a corner shop of a few dollars, for which he was rather harshly sent to prison for 10 years. No namby-pamby civil restitution in those days. Prison proved the perfect training ground for this young lad and by the time he was released 9 years later, he'd been well educated in the skills required for pulling off a bank robbery and getting away with it.
His first task, upon release, was to break back into the Indiana State Penitentiary to spring a motley crew of cons to form his own gang. This is where we are first introduced to Depp as Dillinger as he carries out the well planned and timed outbreak. We don't see him as a teenager, being banged up for a minor misdemeanour ( a la 'Angels with Dirty Faces) or being looked after by some well meaning old lag who tells him to keep his head down and just do his time. We don't get the chance to gain any sympathy for him. We're simply thrown into the thick of the action as onlookers to the very efficient, calculated operation and we witness his coolness as well as his use of violence.

Dillinger's success as a bank robber was down to his use of technology. The money he made from robbing banks was reinvested in equipment. In fact, the best that stolen money could buy.
He had better firepower than the Police, with the Thompson sub-machine gun. He had the fastest Ford V8 car so he could outrun the cops. He was also better organised than the Police who frequently suffered from a breakdown in communications.
His legend grew as a Robin Hood type character as he never stole from everyday people, but from the Banks who were widely blamed for the Great Depression. There's a certain familiarity to this tale that gives it relevance today - and a desire to cheer him on, as did the cinema audiences of the 1930's whenever he appeared in a Newsreel.
It's interesting to note that Dillinger's career only lasted 14 months yet in that short time he still carved out a niche for notoriety in history.

Eventually J. Edgar Hoover (Billy Crudup), head of the FBI, brings in his best man, Melvin Purvis (Christian Bale) with orders to get Dillinger and a cat and mouse game ensues - with Dillinger generally one step ahead of the Law.
Along the way, Dillinger meets hatcheck girl Billie Frechette (played by Marion Cotillard who won the Oscar for her portrayal of Edith Piaf in 'La Vie en Rose')
and their love story plays in the background to the series of bank robberies.

The action scenes are very much 'in your face' thanks to the crisp digital photography by Cinematographer Dante Spinotti, but I didn't have a feeling of involvement as the hand held camerawork was largely distracting. It kept drawing attention to itself and pulling me out of the story.
In general though, the movie looks stunning with effective use of the greater depth of field afforded by the High Def cameras. It looks so different from film, but whether it 'places you there' is another matter.
The sound of gunfire and bullets thudding into walls certainly made me feel I was there as the surround sound did its best to move the picture frames in the lounge.

As for the characters, I felt that I didn't really care what happened to them as we hadn't been properly introduced. I hadn't had the chance to get to know them, to find out what made the characters tick. We were just thrown together in a very busy environment, all of a sudden. There's a lot going on and a lot to take in as famous names from history pop up quickly, then are gone.
Johnny Depp as Dillinger looks good in his many close-ups as well as in the period suits but there's no feeling of warmth towards him. The same can be said of Christian Bale who plays Purvis as a gentleman cop with an aloof remoteness. What both characters have in common is a desire to get on with their jobs in an efficient, effective manner.
Marion Cotillard is the only one to display real emotion as the caring moll who secretly knows how it must all end.

What Michael Mann has given us here is a very stylish movie that looks fantastic.
Remember the change in style he brought about with the 'Miami Vice' TV series.
I'm trying awfully hard to avoid using the hackneyed phrase 'a triumph of style over substance' here.
I would say that 'Public Enemies' compares favourably with a 'nouvelle cuisine' meal. It's all beautifully presented, there's incredible attention to detail but is it an ultimately fulfilling experience?
I would, very much, like to say it is due to the considerable amount of thought and effort that has gone into this production, however in the final analysis I'd have say 'non'. It does look rather good though.