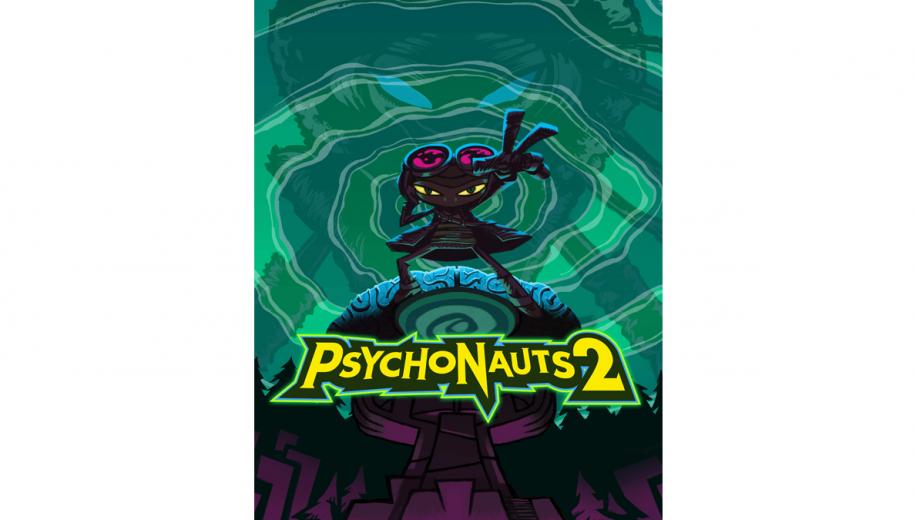 Psychonauts 2 is a game with a beautiful heart, matched only by the beauty of its creativity and level design. It's a game that has 'perks' which actually stops you hurting enemies or lets you pet any passing wildlife, just because it's a nice thing to do. By combining this natural charm and memorable backdrops with some rock solid puzzle-platform gameplay, Psychonauts 2 is a joyous rollercoaster ride from start to finish.

With Psychonauts 2, developer Double Fine really is living up to its name. The original was a cult classic, even though it was something of a slow-cooked success that owed more to a digital reawakening in later years than it did to its sales on launch back in 2005. The good news is that this long-awaited sequel should offer no such uncertainty, as it delivers an absolutely compelling and delightfully entertaining adventure that platform fans of all ages can enjoy. You play as Rasputin Aquato, or Raz for short, a 10-year-old former circus acrobat turned psychic spy, who can use his powers to enter the minds of other people to address their inner fears or conflicted memories – using the medium of platforming and collectibles to right their wrongs. He’s joined by a supporting team that includes a new roster of fellow Psychonauts interns as well as some old friends in an adventure that harks back to the very origins of the titular organisation.

You don’t need to have played the original to get on board with Psychonauts 2, although there’s a nice ‘Previously On’ intro video to catch up on events. Of course, if you have played it then you’ll recognise some of the returning characters and there are a good few nods and in-jokes you might pick up on, but nothing that will detract newcomers from getting much the same enjoyment from the game. Indeed, the game actually picks up from the end of 2017’s Rhombus of Ruin VR spin-off where the team rescued Psychonauts head Truman Zanotto but were left with a few unanswered questions…

It’s to the game’s credit that it manages to feel both fresh and yet faithful to the original. The art style is recognisable from 2005, but obviously has been rebuilt from the ground up for the newer consoles, while the action itself doesn’t veer too far from the original – although there are plenty of new tricks up Raz’s sleeves and a wealth of creativity in play to keep things feeling bright and new.

At its heart Psychonauts 2 is a 3D platformer, combining the usual elements such as double jumps, wall runs, rail slides and more to navigate its bold and beautiful backdrops, although some of the basic jumps can be a little awkward if you don’t get them just right. There are several hub areas which give you plenty of scope to explore for the absolute glut of collectibles scattered around, while the key missions which drop you into the minds of the colourful characters you meet are rather more linear in approach but still require some careful path-plotting to find the best route. Adding to the mix are Raz’s unique abilities, starting with a Psi Blast ranged attack, telekinesis, pyrokinesis and levitation – with five more unlocked as you progress. Each has their own use to aid with navigation or puzzle-solving, while most will also have a use in the game’s combat arenas. These encounters aren’t usually too taxing, especially once you’ve boosted your powers a little, and even the boss battles are refreshingly straightforward and not unduly punishing with a little patience. Although if you do fancy a really easy ride there are several assists in the menus to help out.

By coupling the standard platform tropes with this rich blend of impressively implemented psychic powers, Psychonauts 2 offers up enough variety to keep things interesting, without over-complicating itself or leaving any puzzle outside the realm of a little trial and error. The only minor inconvenience with loading up this fine array of powers is that they couldn’t all be mapped to the controller, meaning there is a frequent need to pop up a radial and allocate the four abilities you want in hand at any given time.

One other small annoyance is that the game is heavy on narrative, which is largely light-hearted and great fun to follow as it twists and turns around a few key pillars so isn’t itself an issue, but the fact it often interrupts the gameplay after you’ve barely taken a few steps into a level can spoil the flow a little. For the most part, though, it’s a great story that drives the adventure nicely, introducing new relationships for Raz, along with digging deeper into old friends and the origins of the Psychonauts founder members (and their relationships with each other). One notable aspect of the game is how it embraces elements of mental health, to the point where the enemies you face are all tied into negative mental traits (regrets, doubts, bad moods, even an enabler who protects them from harm), which you’ll encounter when exploring someone’s mind. Some moments are more overt than others but it never feels like some grand message is being forced upon you and it’s handled very well within an otherwise fun and frivolous framework – so think Inception meets Sesame Street more than a Ted Talk.

As great as the gameplay is in itself, the joys of Psychonauts 2 lie as much in the sublime and wonderfully creative level design. Playing around with mental constructs gives the developers a chance to get weird and wonderful with its backdrops and to really mix things up beyond the norms of the genre – and, as many of you may well know, Double Fine has a great track record when it comes to dropping personality into its titles.

From the opening level, set inside a dentist’s head that at one point flips the camera from the usual 3D view to an overhead perspective and eventually a full-on 2D side-scrolling section, Psychonauts 2 sets just about the right balance between keeping things fun and familiar, and letting its creativity shine. The vast range of beautifully designed backdrops takes you from a hospital-turned-casino to a Marble Madness-style roll around bowling-inspired cityscape, to a trippy cel-shaded trek inside the confused mind of a ‘brain in a jar’ and a library where its residents are all paper cut-outs. Even though we’re not talking photo-realism, and some close-up detail is missing (including lip-synching), Psychonauts 2 still looks amazing for the most part. It has a beautifully disjointed arts and crafts-style visual approach and the range of characters you’ll meet will give vibes from the best of modern animation. As a Microsoft-owned studio, it’s no surprise the game is geared more towards those consoles, with the Xbox Series X version we reviewed helped by the likes of HDR, which really makes the brighter colours pop, making the bolder neon-lit scenes stand out, as just one example.

The Xbox Series X/S and PC versions also benefit from some slightly better specs with variable refresh rates up to 120fps that make the animations all the more fluid, while the XSX also boasts a 3840 x 2160 4K UHD resolution at 60fps (dropping to 1440p at 120fps). The Xbox One and PS4 still offer up Full HD, though only at 30fps, while the PS5 ups the performance to a very solid 2560 x 1440 at 60fps. From an Xbox Series X perspective, we had zero issues with the performance, save for a few moments when the camera zooms in too close when we ducked into a tight corner, and the game had an almost seamless flow through both platforming and combat sequences. Although the quirky visual inventiveness and bold designs are, quite literally, the most eye-catching, the audio performance is no less impressive. The action is underlined by an excellent orchestral score that dips and flows under the gameplay, typically offering up the kind of subtle aural rollercoaster ride you’d imagine from an early Spielberg film but also dropping in notable shifts in tone to suit a new setting, ranging from cool jazz to a moody cello ensemble. It’s the kind of audio set-up that follows you around, even if you don’t really always notice it, making it ideal for larger set-ups while also offering that added intimacy if you stick on a set of headphones. Oh, and there’s a couple of banging tracks from the Hi-Fives for good measure. The dialogue is also a high point of the game. As mentioned, there are plenty of cutscenes giving a lot of material to work through, and the voice performances are great throughout – with a shout out to the 51-year-old Richard Steven Horvitz for making the 10-year-old Raz sound as youthful and effortlessly likeable as ever. We could also point to some notable cameos from Jack Black and Elijah Wood, along with some great performances across the entire cast (both young and old) that helps to give Psychonauts 2 a very warm and immersive feel as the story unwinds.

While some of the jokes can be a little hit and miss, and similarly one or two of the longer scenes might drag out if you don’t immediately warm to the dialogue, we found plenty of genuinely laugh-out-loud moments, some subtle, some a bit more in the ‘baddum-tish’ mould. Our favourite was probably when Raz was asking one the new young interns where she learned to make pancakes and there’s a sudden cut-zoom into her face as she deadpan replies: “Prison”.

Okay, so maybe you needed to be there, but you’ll no doubt find your own favourite moments over the 20-odd hours it’ll take to see the end credits. You can smash through it a lot quicker than that but exploration is half the fun, and given that the many collectibles on offer can fuel your upgrades, it’s usually worth taking your time on each level – and of course that all feeds into the post-credits replay value as you mop up everything you missed, with many characters also acting differently after the end-game events. It’s definitely a game that completionists and Achievement/Trophy hunters can get a lot of satisfaction from. With some wonderful level design, a bold and often brilliant art style, and gameplay that delivers a lot of variety and creativity without being overly demanding, Psychonauts 2 is simply great fun to play from start to finish. Just when you think you’ve seen it all, the backdrops will get weirder, the compelling story takes another twist or you’ll find a new trick to play with, making this a game that rarely feels like it’s simply treading water or just teeing you up for another arena encounter or boss fight.

It tackles serious issues with a light touch, and has a charm and personality that’s hugely endearing to watch and even more enjoyable to immerse yourself into as you jump from one mind into the next creative playground. It may not add anything particularly new to the genre, but everything Psychonauts 2 delivers is pretty much pitch-perfect in terms of nailing the basics and polishing everything within its world until it positively shines. 16 years has been a long time coming but Psychonauts 2 has most definitely been worth the wait.