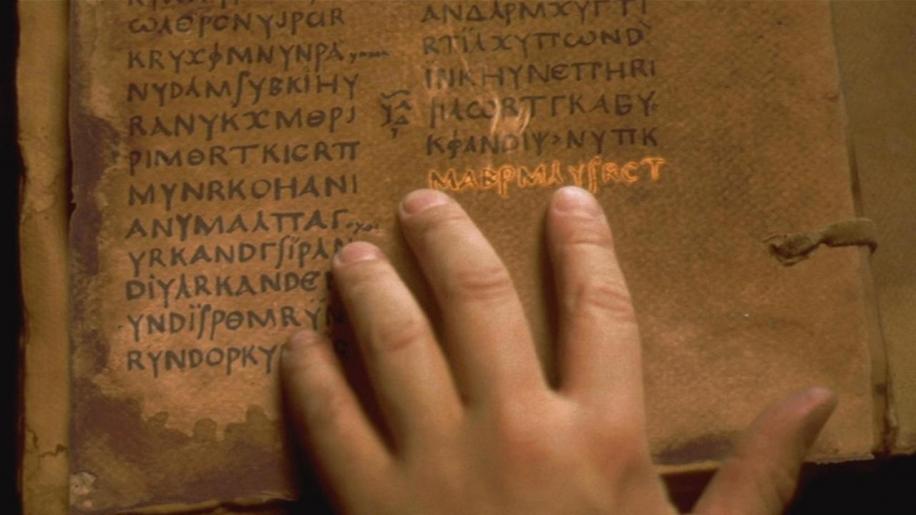 Well, this one is a bit of a jumble, really. Considering that it is a new film, you would expect, at least, a nice clean transfer, free from grain. But, I'm afraid this 1.85:1 anamorphic image is literally plagued with it. Gloomy scenes, such as in the cathedral basement or its tower are terribly fuzzed up with it. But beyond that, individual scenes or images are randomly singled out for ultra-graininess. For instance, the image of a mural or fresco on a church wall can be appallingly afflicted when, with a simple cut-away, or angle-change, the next image, of a character's face for example, will be relatively clear and unblemished. There is a very curious and disturbing lack of consistency and with all that grain floating about, the black levels are seriously compromised too, becoming just varying shades of mushy grey. As one character actually says, “No more black ... just endless shades of grey.” Admittedly, watching this on a 32inch screen lessened the damage, but on a 44inch the level of grain was, at times, intolerable.

On a plus note, however, the skin tones seem to work quite well, in keeping with a colour palette which offers frosty, pale blues and greys for the exteriors and some quite surprisingly warm tones for the interiors. Blood, though sparsely shed in this anaemic chiller, is a satisfyingly deep red. When ethereal light shines the image is bathed in a lovely golden hue - though, unfortunately, this would have gotten away with it if it wasn't for that meddling grain poking through again. The detail too, is quite well delivered. Close-ups work very well - faces, in particular, are almost pore-perfect and the squalor of the stark opening chase scene through the urban wasteland is nicely captured. But overall, this is a very disappointing transfer. Things do improve with the audio transfer although not by much. The only track on offer is an English Dolby Digital 5.1 mix which does, at least, present us with some attempt at surround effects. We get some nice steerage of bells tolling, police sirens wailing, a pack of dogs barking and even birds shrieking at one point. Nothing very spectacular, nothing very atmospheric - and the sub will be left sitting this one out for the most part. Gunshots, when they come, are suitably loud and punchy but this is really not a showcase for bombast. A problem I did notice though, was that dialogue, whilst always clear and distinct, with some steerage across the front soundstage too, sounds somewhat dislocated at times, coming across a little too boomy and over-amped. Not a major distraction, but still noticeable. The film, as I mentioned earlier, seems to be leading up to something that never satisfyingly materialises and the soundtrack matches that promise and eventual lack of pay-off, too. The impression I got was that it lacked conviction - the power and the presence was there but was too shy to make itself heard. At first glance, it might appear that you are in for a treat with a seemingly generous helping of bonus features - a chat-track, a Making Of and some cast auditions, rounded off with a deleted scene and an extended ending. Sadly though, none of these extras are any good whatsoever. The Commentary is certainly the pick of the crop - featuring lively input from actresses Kari Wuhrer and Georgina Rylance, director Soisson, FX man Gary Tunnicliffe and producer Nick Philipps - but, as chatty and informal as it is, it rarely delivers anything of value, or even passing interest. Oh yes, they all loved Bucharest and how the place, the people and the history there affected them, but somehow their anecdotes and witty asides seem shallow and un-involving. The women have an annoying tendency to clap and cheer that comes across as purely bogus, and although the backslapping is thankfully of a more jokey nature on the whole, the team-bonding ethic still grates a little bit. They also seem to spend too much time discussing and admiring the locations that they filmed in - and to be fair, Bucharest looks nicely atmospheric and unfamiliar - when a little more in the way of plot development and story genesis would have been welcome. Then again, they're probably none the wiser.

Then we have the Making Of. Oh dear. This is actually entitled Adapting To Mother Nature and offers us 5.45 minutes of how the production team coped when unexpected snowstorms blew in. Apparently it necessitated script changes to incorporate the little snowflakes into the plot. Do you know what - until watching this miniscule featurette I hadn't even noticed the snow in the film, visually or thematically. A terrible inclusion that offers absolutely nothing of interest about the making of the film.

The Extended Ending is utterly pathetic. It may last for 1.40 minutes but it's really just a couple of sentences of theological jargon inserted into Doug Bradley's waffle during the final confrontation. Coupled with the tiny Deleted Scene, which has acting-vacuum John Light mumble something about Twinkies, these are complete dross. They add nothing in the way of subtext, character-build, and atmosphere or even reveal any creative missteps that were perhaps deemed to have slowed the narrative down. Pretty pointless, in all honesty.

Still, there's always the Cast Auditions to fall back on. These last 14 minutes and offer us snippets of Doug Bradley, John Light and Sean Pertwee. Actually, it is Bradley who acquits himself the best here. It must have been hard to act in character and in-the-moment with such a monotone, stuttering accomplice supplying the line readings to him. Still, after sitting through this display you will have learned nothing and barely been entertained. A once-only affair.

The Prophecy Slideshow last 2.20 minutes and belies its title by having lots of live-action scenes culled from the film that occasionally segue into a snapshot. Any good? Well, going on this disc's track record so far - what do you think? Yep, you got it. Totally pointless. Much like the entire package. Nice setting, shame about the film. Part of a lacklustre franchise that really should be sealed up and forgotten about, this instalment, nevertheless, can stand alone as a thriller in its own right. But that is really no reason to recommend it. Straight-to-video bargain-bin fodder is all you'll discover here. It will certainly be a cold day in Hell if this is all you had to entertain you. If the lame plot and dull, unexciting narrative aren't enough to put you off, then the woeful extras and middle-of-the-road AV performance should do the job. Not dreadful, merely unnecessary.