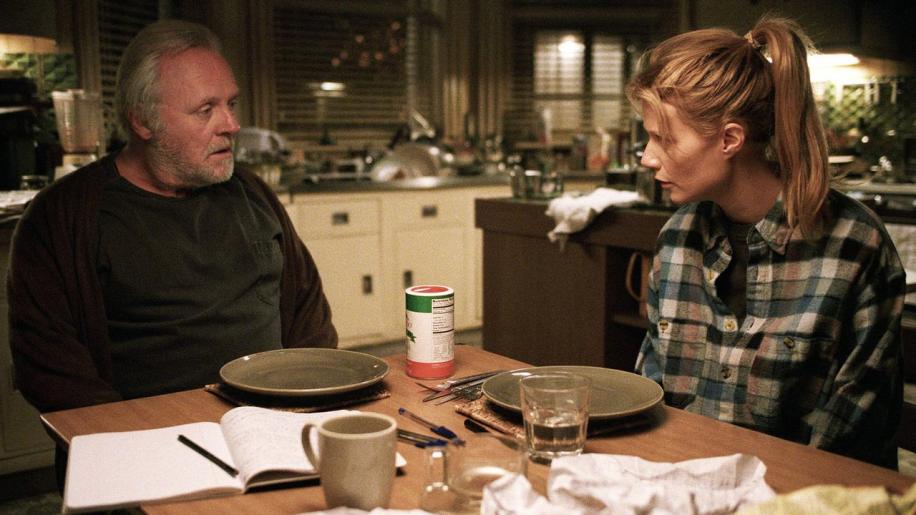 Anthony Hopkins is one of those high calibre actors who never fails to captivate in any role that he takes on. Whether he be fighting grizzly bears in The Edge, interacting with gorillas in Insinct, eating people as Hannibal or just cameo-ing in blockbusters like M:i-2, he is the kind of quality actor that stands leagues above his on-screen colleagues. Ok, so he is getting older as the years go by and there will come a time when, like the great Sean Connery, he will have to hang up his cape, but at the moment he is still capable of bringing a great deal to the productions he is involved in and - in my opinion - still worth giving a lead role to.

Proof is about a young woman, Catherine, whose father, Robert, just died of an aneurism. He was a great mathematician who started to go insane in his late twenties and now, on her twenty-seventh birthday, a day before the funeral, Catherine starts worrying that the same thing may be happening to her. One of her dad's prize students - now a lecturer - is intent on getting to the truth behind Robert's madness and find out whether or not he left behind a maths legacy that could prove to be a scientific breakthrough. As the story evolves, we see flashbacks to her youth and her time with her father, inter-spliced with her mental disintegration in the present, all the while under the watchful eye of both her overbearing sister, Claire and her dad's ex-student, Hal. But the real question is: is she really losing it, or is everybody around her just pushing her in that direction? Moreover, will the end result be the same either way? Will she just go insane?

Proof is a cleverly executed psychological thriller with an oppressive, dramatic script that gets you up close and personal with a woman who is on the brink of a breakdown. You can really empathise with the central character and her plight, watching as everybody around her pokes and prods and questions her, already assuming that she is as insane as her father was. A great deal of credit has to go to Gwyneth Paltrow (who I enjoyed much more in movies like Great Expectations than in Shakespeare in Love, which was directed by the same man as this movie, John Madden) the lead actress cast in the difficult role of Catherine. It's a tough part for her to play (particularly since in real life her dad died just before she did the movie) and I thought she nailed it completely.

Ironically, after all that talk of how great Anthony Hopkins is, here he basically gets an extended cameo role. It's such a disappointment to see such wasted talent - sure the role is good for him and he is great as ever in the part (especially shining in towards the end of the movie) but he just does not get enough screen time for my liking. Jake Gyllenhaal, who proved his worth in Donnie Darko and has gone on to take leads like in Jarhead, gives a good supporting performance as the romantic interest for Catherine and Hope Davis is suitably irritating as the intrusive sister. They are all-round good performances, but the brunt of the talent clearly comes from Paltrow.

Proof is a good, solid psychological thriller, with warm moments, tearful moments and plenty of stress and tension to capture the emotions of a woman who might or might not be crazy and might just be losing it because of the influence of those surrounding her and her own hereditary paranoia. There are hints of A Beautiful Mind in this interesting drama and it plays out in such a clever way that even the audience is unsure as to what exactly is going on until the very end. Is she really insane? Was her dad really a genius? Proof is easily as smart as the sum of its excellent parts.