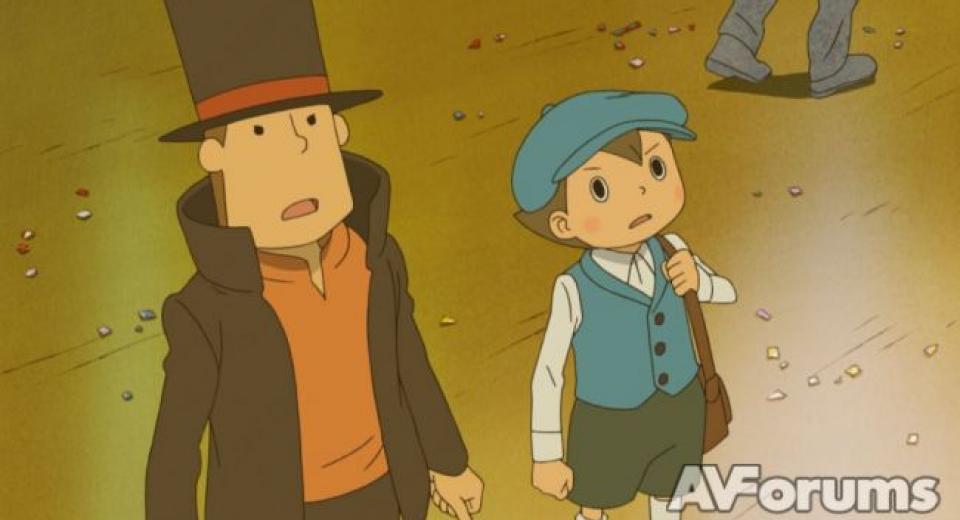 Professor Layton may be purely mass-market, light-hearted and untaxing gameplay wise, but he’s ploughed a furrow through the handheld detective/puzzle genre and gained a cultish fanbase that only the uber-quiffed Phoenix Wright could hold a candle (or should that be an objection?) to.  The Miracle Mask marks the fifth title in as many years from Level 5’s whimsical detective series, and now with the shift to a new platform, the question is whether the franchise can adapt and evolve, making use of the 3DS’ three-dimensional functionality and extra horsepower, or whether it’ll rely on the tried and trusted methods laid out in its dual-screen heritage.

The first screens are something of a culture-shock for those accustomed to the games’ mimicry of hand-drawn characters and traditional animation.  The charm of the slick - but still cartoonish - cut-scenes was always a draw, a little cartoon adventure that’d greet the successful puzzle-hound at key points in the story arc.  Miracle Mask doesn’t eschew those old-school aesthetics, the animated cut-scenes are still there, but it does aim to bring something new to the party.  Both in-game character designs and the way in which you navigate the backdrops for clues are pushed towards the third dimension. There may be a sigh of dismay from the die-hard series fanatics at the way in which Layton and his schoolboy sidekick - and apprentice sleuth - Luke have transformed in-game.  The key character traits are there and the wardrobe is intact, but little there’s definitely something different beyond the extra dimensions.  Luke’s excessively manga-esque wide eyes, coupled with the subtle swaying animation when figures are dormant, gives him less of a plucky Just William air and more the appearance of a blank-staring simpleton child.  The use of cel-shading and simple textures minimises the switch away from sprites, but given the cut-scenes are still traditionally animated there's a slight sense of a loss of cohesion with the alternating styles.

It’s a reasonable rejuvenation, but it doesn’t quite hit Wind Waker levels of capturing the essence of the previous presentations, however, as with Link’s outing, the formula of atmosphere essentials lessens any jarring impact of reinvention.  Here we can tick off all the usual suspects -  a hummable score, madcap characters, solid voice acting in English dialects and scripting that captures those colloquial caricatures nicely. The gameplay remains the same; a mystery lies afoot for you to solve.  This time you’re whisked off to a strange city, a marvel metropolis created in the middle of the desert in a mere 18 years and now plagued by nefarious goings on and a masked figure seemingly hell-bent on bringing the populace to its knees; it’s a narrative that once again will have our top-hatted Holmes-a-like facing ghosts from his past.

Ten major mysteries will present themselves; combined, the stories of each will help show Layton the bigger picture and lead him to the truth behind the central plot.  This smart element needed no tinkering with, offering those with a nose for narrative twists the opportunity to formulate their own hypotheses.

The story is pure Professor Layton, but many will care only for the brain-teasers it serves up.  In this regard there are some subtle changes.  The continual screen prodding of past entries is gone, and in its wake lies a more focused system utilising a magnifying glass - seen on the top screen but controlled via the touch screen - that is swept across the backdrop in search of clues.  Once it rests over an area of interest it’ll change colour, orange for something that’ll trigger a comment, a hint coin or a puzzle, and blue for the option to zoom into the screen. As you peer about your environment the facade of three dimensions is pushed to the fore, exteriors are really more of a backdrop that are subtly shifted in relation to some foreground objects, but it works well; interiors show off the new engine much better, with a genuine sense of depth.  It’s a bit too easy to find the hint coins now - precision prodding being replaced by magnifying glass sweeping - but the ability to have the screen shift as you peer beyond the bounds of it, into a tangible space, shows that Level 5 are keen to find a way to evolve the series.  Unfortunately the hardware’s gimmicky 3D can’t really lend a hand as it struggles to find consistency in amongst the differing perspectives.

The use of the bottom screen as a sort of mouse mat for something visible on the top screen is necessary in order to display the core visuals on the top - 3D enabled and larger - screen, and whilst it’s a nice novelty, it does bring with it an issue.  Namely that the puzzle explanations - which can be vital for more verbal conundrums - aren’t always there for you on the top screen as before.  Particularly vexing when the larger display is merely being used to show an associated picture, non-essential to the task at hand.

If you have to tackle a brain-bender that requires both the dissection of some long winded instructions in conjunction with a bit of memo taking (an early example being an identity parade), well you’ll have to flit between the two on the bottom screen, remembering key points and making your notes whilst they’re still to mind.  But then, the occassional clunky puzzle design has always been a criticism that could be levelled at the series, largely because they stick out like the proverbial sore thumb against a backdrop of assuredly slick and accessible head-scratchers.  The sheer variety is the reason behind the odd minor stumble as well as the bedrock of Layton's continuing sucess.

It may be my imagination, but I could swear there are subtle signs that attempts are foot to gently shift the focus of a few puzzles, to try to sever this over reliance on what could really be browser-based static stumpers that have no real dynamism.  A little extra interaction is occassionally noticeable, and though there isn’t enough to make this title puzzle-wise even vaguely on the road to an overhaul, there are the budding shoots of a fresher direction if you care to look closely.

This tentative shot-in-the-arm is also apparent when, in the very first moments of the game, you take to your steed and enter a chase sequence in full 3D.  It’s fluff, avoiding barrels and collecting carrots, but somehow when it’s bookended with some nice cut-scenes it’s forgivable.  If the essence of what's on offer isn't radically different then at least the additions can offer some variety, as seen in the mini-games.  You have the old navigation tasks covered with Toy Robot, some spatial conundrums in the shelf-stacking Shop and finally a bit of cuddly digi-pet training with the Rabbit Show. That’s really what this game delivers, the existing formula plus a few little twists; that dependable whimsy of a Professor Layton title, that colours everything in a warm glow, making the sum of its parts - largely what could be browser-based teasers - grow on the gamer into a whole that is sure to shift units.  You’ve got the challenge of 150 new puzzles to tackle, woven into a storyline, but away from the narrative there are fresh mini-games (as ever, absurdly simple but rising in difficulty to a level that is more devilish than the main game), Picarat bonuses to unlock and the promise of a puzzle-a-day downloadable from the Nintendo Network - that’s right, there’s a reason to connect to the Nintendo Network now!

Professor Layton and the Miracle Mask is a pleasant evolution for the series, it doesn’t try to overhaul what’s past, rather overlay the old and trusted with the new.  The implementation of 3D in graphics design terms is largely a success, but the system predictably fails to truly shine with its own gimmicky stereoscopic dimensionality.  Luckily the charm and warmth that emanate from a Layton game shines through, even a few puzzle mechanics that leave a little to be desired are easy to forgive.  A mystery to unravel, a wealth of new story-based mental challenges, some new mini-games to best at will and a sprinkling of variety hinting at a dynamic future for Hershel and co.