Pro-Ject sets to out to prove that affordable doesn’t mean fugly. 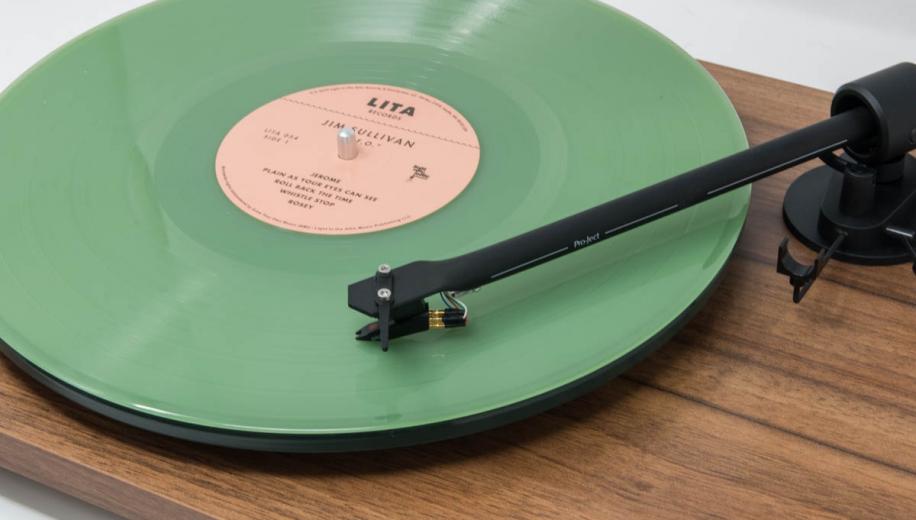 Introduction - what is the Pro-Ject T1?

The Pro-Ject T1 is an unsuspended, belt drive turntable which, given it costs less than £300, is not terribly surprising. Pro-Ject already makes a vast, nigh on unfathomable number of affordable record players, to the point where you could hold a peculiar, vinyl focused version of The Generation Game trying to remember them all. What then, is the T1’s reason to exist?

The answer is two fold. The first is that the T1 has some specification and performance refinements that I don’t remember seeing from Pro-Ject at this price before, which should broaden its appeal beyond some of the more stripped down offerings at the price. For every person that enthuses over some hair shirt minimalism, there are plenty that don’t.

The other is that Pro-Ject has combined some of these refinements with aesthetic tweaks to make the T1 look a little less utilitarian than some of the Pro-Ject turntables of old. There are limits as to what the budget allows at this price but Pro-Ject has worked to make some refinements here and there to how the T1 looks that helps it to feel a little smarter as a result. There is no shortage of competition though so can it hold its own against the many rivals out there?

Pro-Ject builds turntables in a manner a little like how modern car companies make a range of cars. The actual amount of parts that they use is rather smaller than you might expect because there is a core of components that are used across multiple devices. These can be combined in variation to produce a very wide selection of products. The T1 is unusual because it is quite a significant departure from this ideal.

The most obviously apparent departure is the arm. This combines some of thinking that we saw in the entry level Primary in that the bearing assembly has fixed anti skate and VTA settings that ensures that it arrives setup. The caveat that you can’t adjust the arm to allow for a different cartridge to be fitted is applicable here but ameliorated by the Ortofon OM5e cartridge that it is fitted with having upgradeable styli (and we’ve covered the benefits of this here) and the more prosaic fact that most turntables at this price point will never have their cartridge changed.

This bearing assembly is mated to an 8.6 inch aluminium armtube that is altogether more substantial than the one on the Primary. It feels usefully robust and rather stiffer and better damped than the slimline tube on the less expensive model. The T1 ships with the counterweight in place and it is very accurately set too. It is not fixed in place though so, technically, as long as another cartridge could be found with similar anti skate properties, it could be substituted.

The other changes are harder to spot but no less significant. Unlike every Pro-Ject turntable we’ve looked at before, the T1 has a platter and sub platter assembly. This means that the belt acts on the sub platter rather than the platter itself. This means that the motor can also be moved closer to the spindle which - in theory anyway - should help control unwanted oscillation. On a much more practical note, it means that fitting the belt on the T1 compared to the outer edge models is a complete and utter joy.

The sub platter is made from plastic but the platter is also a departure from Pro-Ject design thinking in that it is made from a sheet of 8mm thick blasted glass which is combined with a felt mat for the actual playing surface. There are various arguments for and against the use of anything for a platter and glass is no exception. Technically, it is resonant (athough this is not a fixed value) but the mass it offers from a relatively small amount of the stuff is a useful attribute.

There are three versions of the T1, a classic version that needs an external phono stage, a version with a switchable phono stage built-in and seen here, and a model that has both the phono stage and the ability to stream over Bluetooth. Of these, the version with the phono stage is the most interesting because it has electronic speed control (and no, I am not completely sure why only this model has it). This is not a common convenience feature to find at the price and means that the T1 is an excellent option for people with plenty of material at both speeds.

Pro-Ject has also decided that the phono stage can be switched off which is a welcome extra feature too. The chassis for the phono stage is on the rear underside of the plinth and terminates in RCA sockets (for which a grounded interconnect is supplied in the box). Like changing cartridges, I am not sure how many people will move to an external stage but it is admirable that they can.

Some parts of the T1 are very much in the traditional Pro-Ject style. The power supply is a wall wart type (except in the basic version which is captive) and the plinth is a single MDF section that is supported by three feet which - like on the other occasions I have encountered them - do a fine job of isolating the playing surface from the outside world. Thanks to the subplatter arrangement, this is also the easiest Pro-Ject to get up and running that I can remember.

It is also one of the best looking. As well as the ‘walnut’ finish you see here, there are gloss black and white finishes (Henley Audio, the distributor, kindly sent the walnut because it is easier to photograph) and these combine with the clean looks of the T1 to make for a genuinely attractive turntable. Thanks to the arm having a fixed bias measurement, there isn’t the traditional line and weight arrangement on the bearing housing which helps to clean up the lines of the turntable. It combines with the glass platter to result in the cleanest and more elegant looking affordable Pro-Ject I can remember testing.

This is important because even at this price point, there are options that manage to feel quite special. The Planar One Plus from Rega has the same functionality as the Pro-Ject and - until the T1 came along anyway - it simply felt a little more elegant. The T1 manages to close that gap. It also feels solid too. The arm is well made and has a confidence inspiring lack of play or travel in the bearings. To be perfectly clear, the T1 doesn’t feel like a £1,000 deck… but for different reasons, it doesn’t feel like a £289 one either.

Thanks to the subplatter arrangement, this is also the easiest Pro-Ject to get up and running that I can remember

How was the T1 tested?

The Pro-Ject has been powered off an IsoTek Evo3 Aquarius mains conditioner. It had mostly been run connected directly to a Rega Aethos integrated amplifier and a pair of Focal Kanta No1 speakers. The internal phono stage has been switched off for a short test connected to a Chord Electronics Huei. The test material has been vinyl.

While I wasn’t completely sure what to expect from the T1 once I had it up and running, I was fairly confident that it would be good. The Essential III is an absolutely brilliant turntable and even the cost effective Primary is a compelling listen. Even with this taken into account, the T1 was still able to spring some wholly pleasant surprises.

Let’s start with the basics. The Pro-Ject is absolutely pitch stable and the noise floor via the built-in phono stage is sufficiently low (and the gain it offers sufficiently high) that normal listening levels are unlikely to result in any significant level of unwanted noise. What does this mean in reality? It means that the T1 can play - and really dig into - Paul’s Boutique by the Beastie Boys.

Now, it is wholly possible you might not consider this to be the natural place to start if you’re looking for a reference recording but it really is. First up, there wasn’t a single Beastie’s album that was anything other than well mastered and Paul’s Boutique is a fine example of the breed. This is an impossibly dense and complex record, peppered with some of the best sample use of all time and machine gun lyrics. The T1 is able to take this record and open it out and make it work. You can follow the lyrics and make sense of the frenetic energy that infuses the whole production. It does this without turning the performance into a disinterested study. It’s light on its feet and effortlessly tuneful.

Some of this lightness of touch comes from the inevitability of being a small, affordable turntable so if you want seismic bass, I am afraid you will need to find more money. The bass that the T1 does have is able to start and stop when needed and there is a useful amount of fine detail too. In fact, the amount of detail on offer across the frequency response is very impressive. Sat next to a Rega Planar 10 (for the price of which you can have 15 T1s) and spinning Nils Frahm’s magnificent Spaces on both, there are nuances that the Pro-Ject misses but most people don’t buy a £289 turntable to park next to a £4,500 one. Judged on its own merits, the T1 is genuinely impressive.

What this manifests itself into is a turntable that you can listen to and make no excuses for. It’s a fine example of what affordable vinyl can genuinely achieve and it does this while ensuring that your expensive investments are looked after. During the review phase for the T1, I had three turntables on the go of which it was by a huge margin, the least expensive. Despite that it wasn’t something I hurried to switch off.

The ‘give’ for all of this is that, while you can upgrade the T1 to an extent, it largely is what it is. Moving to the Chord Huei doesn’t unlock an extra layer of performance over the built-in phono because that is able to accommodate the technical limits of the deck. I haven’t changed the cartridge either but suspect that there would not be enormous gains from doing so, although changing the stylus might be beneficial. Even here, the T1 doesn’t encourage you to rush. Something that is genuinely intriguing - because I don’t know why this would be the case - is that the T1 is markedly less prone than the Primary to end of side distortion, which is a puzzle as both have exactly the same cartridge.

Coming after the Planar 10 and Vertere DG-1, it might be expected that the T1 would struggle. To be clear, it’s not a giant killer by any stretch of the imagination. If your budget can stretch further, there are better decks out there. What is abundantly clear after testing it though is that the T1 is a genuinely likeable turntable. Pro-Ject has brought some new parts into their affordable turntable system and the combination of them here has resulted in a turntable that’s a breeze to set up, well made and easy to use. No less importantly, it looks clean and elegant in a way that has sometimes eluded Pro-Ject’s most affordable models. Crucially, it then does enough sonically to complete the package. This is an invigorating listen that can get more out of your records than you might reasonably expect at this price point. This is a seriously good record player for under £300 and it has to be seen as a clear and obvious Best Buy as a result of it.