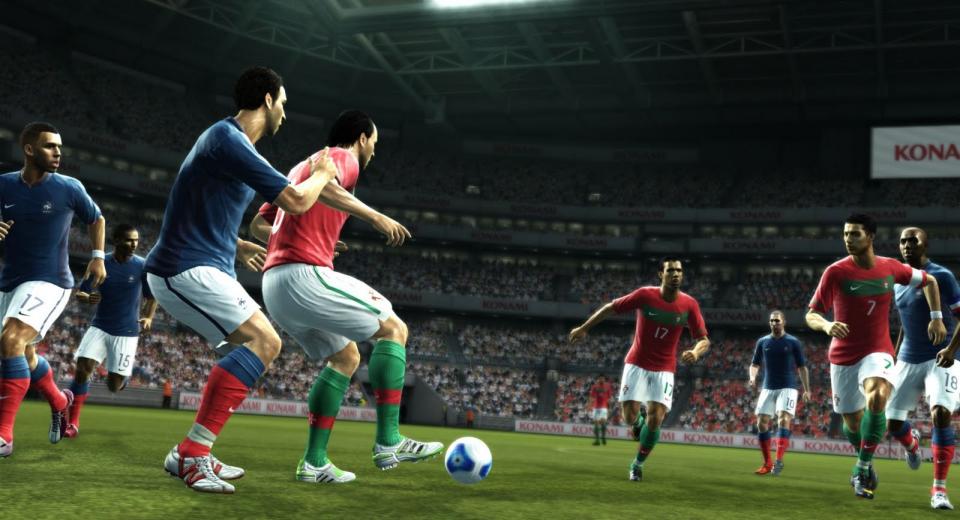 It’s with a fair amount of delight and trepidation that I can state that in 2012, the answer to this year’s raging PES vs FIFA debate is far more nuanced than ever before. Konami has swung this series around in pretty sharp fashion by tying up the loose ends of physics and gameplay, cribbing some of the best elements of their competition and whipping them up into a package that - although still rife with idiosyncrasies - can finally *almost* compete with the best. And that’s a qualified *almost*, as in some respects, PES is actually ahead of its competition this year.

So, in terms of what’s new, this definitely isn’t the time for people to be dancing on the rooftops over licensing deals or presentational polish. The fully authentic teams are as sparsely populated as ever, and the licensed competitions still revolve around the Champions League and Copa Libertadores almost exclusively. As before, that Champions League license is well-plumbed for atmosphere and theatrics, but this time around comes with an exclusively nauseating quantity of Cristiano Ronaldo footage - which may or may not break your relationship with PES 2013 before even progressing through the group stages. Seriously, it’s ridiculous. Graphically too, PES is still stuck with the same menu polish (or lack thereof) and uneven fidelity as it has been for a good while. Player likenesses are either spookily brilliant or downright bizarre, and whilst the lighting, camerawork and atmosphere in each of the excellently modelled stadiums adds to the authenticity of the experience, the replay frame-rates can be choppy and some of the player animation (running, specifically) looks jarringly robotic next to the smooth grace of the FIFA 12 or 13 engine. The long-rumoured Gen4 (is that the accepted term now?) PES engine overhaul will hopefully smooth out those long-standing wrinkles, but as for the here and now, 2013 is still a visually schizophrenic experience, albeit one of fairly high quality.
And whilst we’re on the aspects that drag PES 2013 down a little, it’s probably also worth noting that there are a few other long-standing gripes that I wish they’d dealt with in this iteration, but instead still exist in a somewhat muted state. Defenders still have a propensity to run the wrong way or fail to stick out a leg as a through ball trundles past them, goalkeepers occasionally get caught ball-watching, and there’s that nagging feeling of scripting that rears its head every once in a while as a pass inexplicably ghosts its way past three defenders whilst they stand and watch. The ball also occasionally cannons off thin air into the top corner with your striker’s boot a good half-foot away from connecting, and the slightest of fouls can be punished with a red card.
They've not gone unnoticed however, and although those issues are long-standing, they're all vastly improved and less numerous than they ever have been - no matter how disappointing it is to see them crop up again. Obvious negatives out of the way then, let’s concentrate on what PES 2013 does right, and that’s (in order): nip gameplay annoyances in the bud; tuck in the rough edges of the physics simulation and animation; and outright steal some fantastic ideas from the best new tricks in the FIFA engine. First up, manual defending. If you’ve played FIFA 12, you’ll instantly recognise the switch to holding down ‘A’ to shepherd a defender rather than diving in for a tackle, combined with the ability to tap a different button and attempt to stab the ball away from the feet of the opposition (in my case, with the right trigger). In PES 2013, this system is brilliantly implemented with an additional level of control that allows you to narrow or open the gap between you and your chosen target. As a result, you can allow that tricky winger some space and try to block the ball if you know he’ll burn past you with a step-over or two, or you can close the gap on a slow-paced playmaker, hurrying his decision, narrowing passing angles and shutting off avenues of attack.
It adds a subtle layer of tactics and emphasises the one-on-one battles that occur everywhere on the pitch. As a result, the close-control system (activated by holding the right bumper on my scheme) has been given a semi-overhaul that actually makes it a useful addition to your armoury in all sorts of situations. Players like Xavi and Pirlo can now realistically sit on the ball in midfield, turning inside-out or rolling the ball away from an oncoming tackle. Presumably as a result of that emphasis, passes have been smoothed out and zip around on trajectories that seem much more realistic, whilst pinging a ball into space is easily achieved with the lofted pass button or by activating manual controls and arcing it over the heads of the opposition. Shooting too, is vastly improved. The ball fizzes at a realistic pace and it’s now possible to score with players from all areas of the pitch - provided you keep your cool and take your chances with the composure necessary for their lack of attributes. Crucially, shooting doesn’t feel anywhere as random and sometimes unfair as previous versions, and missing a golden chance has the onus firmly on the person in control of the pad rather than erratic AI. Trapping the ball has also come under scrutiny, with a separate control introduced to tap just before you receive the ball. Doing so allows you to bring it down on a dime rather than pushing it out in front, but it's a tricky one to master, requiring a lot of practice before becoming second nature. It's a markedly different approach to that of FIFA’s attribute-based randomised first touch this year, again putting the emphasis on player skill rather than an AI simulation.
When you've had sufficient practice and those systems all come together then, PES 2013 can be a breath of fresh air in comparison to the scripted physics and fairly rooted gameplay of previous years. The pace is slower with different player attributes and their accompanying tactics far more pronounced and viable than in EA’s masterpiece, and nowhere is that more apparent than in singleplayer modes like Master League - which is still the most satisfying solo mode of any footy game outside of Football Manager. The deeper charms of the gameplay engine might not open themselves up until a couple of hours' slight confusion and mild frustration have passed whilst rewiring your brain from FIFA-developed instincts, but the important thing is that PES is able to prise an emotional response again, and that those emotions are concerned with on-pitch action rather than broken mechanics.

For those thinking about jumping back over from FIFA, please do be aware that there’s still plenty of work to be done here in terms of physical interactivity, heading and a fair few basic animations that need to be completely overhauled or shed entirely, but despite those misgivings, PES 2013 is finally an iteration that’s enjoyable to play at a basic level - and the thrill of that can’t be underestimated. Konami’s series still isn’t the freeform wonder that FIFA moulded itself into, and the online offering simply can’t hold a candle to EA’s title, but in most other respects it’s an apt counterpoint to the reigning king. Crossing back over that divide is a difficult task at times, but ultimately PES is extremely rewarding even for those of us that were fully invested in the other camp for a number of years, and there’s absolutely no reason that football fans shouldn’t pick up both games this year. That, in itself, is a wondrous thing to behold.