Konami show us their balls once more 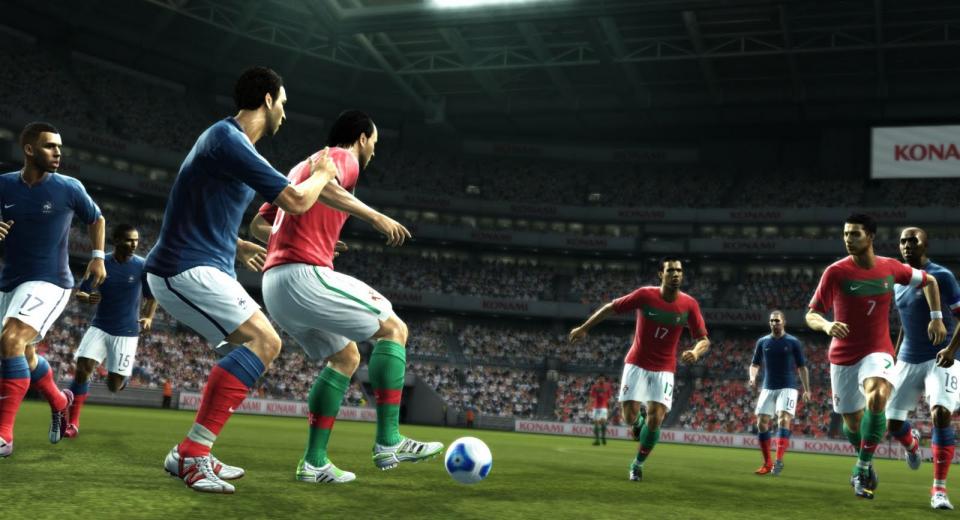 It’s that time of year again when the two football titles go head-to-head and see who has the biggest handbag. Many out there will already be lapping up what probably is another brilliant FIFA iteration, but those with patience and devout fans will be waiting for their football fix to come in the shape of PES 2012. There’s no point in denying it, PES was the king of football games and FIFA was left to flop about like a fish out of water but in recent years the slave has become the master.

Shingo ‘Seabass’ Takatsuka is once again the lead producer behind this year’s efforts and he has not lost his passion for the series one bit. Promising new mechanics and improved areas from last year, he is keen to see his title shine once more in a similar light to FIFA. From the outset, you can tell that PES has been spruced up since last year; the clean cut menu system and useful player management structure remains intact yet look updated and fresh.

After an initial mind-melting update before you play, Konami also throw as many customisable features at you as possible including Facebook integration and your own player to edit and customise. For all those nit-pickers and the small few who have OCD, there is a vast quantity of features to choose from to re-create yourself in avatar format. Somehow, it never seems quite right and one feature or another will stick out too far or be greatly out of proportion.

Konami have stuck to their guns with this year’s title and in terms of game modes, they’ve gone with the philosophy “If it ain’t broke, why fix it?”, and why would you? Every mode had its own reward for playing and the multiplayer side of things was functional so last year’s modes make a welcome return. Not having licences for the Premier League (or its teams apart from Man United or Tottenham) makes PES lack the same depth as FIFA as the regular league often feels bland and unrewarding at times whereas the Champions League is where the party is at.

PES comes into its own when you play the European campaign as there’s the build-up, music accompaniment and fully licensed teams so you can relive some classic moments and face your rivals head-on to fight for championship glory. Players’ names are called out by commentators in what should be the Premier League like they are here, but with no team names to be heard then it often feels a bit empty. The commentary is tighter than last year with Jim Beglin and Jon Champion controlling the mics once again but you’re unlikely to hear any remarks that don’t fit the flow of the game although sometimes you can tell that the script is heavily contrived. Still it could be worse; Andy Gray could be providing vocals….

You don’t need expert eyes to see that added detail has not only been given to the setup screens but also to the players too. Especially when you look at the more familiar Premier League stars, you will instantly know who you are controlling is by their size and physique. Unfortunately though, their running motions are identical to one another so you will never see any ‘signature’ moves performed by any one player. Don’t expect Nani to do a backflip when you score, likewise Anelka won’t perform his butterfly routine either on the rare occasion he actually nets.

It’s hard to tell whether or not the control scheme has been tweaked or not since last year solely based on the gameplay. The marketing spiel that comes with the game suggests otherwise but for the first few times you load Pro Evo up you’re likely to have a dog of a time with it, especially if you’re new to the franchise. It may be because it’s been a while since I loaded 2011 up, but the passing and shooting especially just does not feel intuitive at all.

From passes that get intercepted to shots that trickle along the floor, you constantly battle to gauge how powerful your passes and shots must be as you cannot rely on past experience to aid your judgement. Half a power bar on the shooting meter will often be saved by the keeper far too easily whilst a fully powered pass will quite regularly get snaffled up by an opponent.

Not only does the passing and shooting feel unnatural, but watching players run with the ball is equally as bad. Whilst dribbling, players never kick the ball further than a foot away from their feet and always look like they will stumble over it at any second. This makes turning round the defence a nightmare and more often than not you will just charge head first into your opponent. Konami have tried to nip this in the bud however by implementing extensive training modes for each specific area of the game such as free kicks and penalties and so on but at the end of the day, who really plays through all these? The hardcore fans maybe, and the trophy whores, but for the casual player, all they want to do is pick up and play.

An aspect raised about last year’s title was the way in which you scored goals and how the best way to set them up was; split the defence with a killer through ball and score. This is once again the case, with only two goals coming from headers throughout the entire period of reviewing, but this time, what with the problems with the passing and shooting, this is trickier than it was before. Keepers always seem to know where you’re attempting to put the ball, so don’t be surprised to see some wonder saves being pulled off. When they’re off form though, keepers make your heart jump into your mouth as they seem reluctant to come out for the ball when left by your defender.

Unfortunately, the online side of things could not be reviewed as at the time of writing the online modes were not supported. Fans will be hopeful that some niggles with the last game will have been fixed such as some problems with lag and more support from Konami.

After all is said and done, PES has improved. The problem is that it has done so very little in terms of defining features and making the experience more enthralling. Granted, neither does FIFA, but what it does do it does well and builds extensively on an already winning formula. Many fans will still be left wondering why Konami have failed to tap into this success and why their blueprint stays nearly identical year upon year. But don’t underestimate these shortcomings though, PES 2012 is still an enjoyable title once you get accustomed to it; just give yourself a chance to do so.

Konami once again deliver their spin on the football genre which fits the old statement: when it works, it works well, and when it doesn’t it can be very frustrating. Granted the player models have been improved and the whole package comes as clean cut as ever, but the fact remains that there is a steep learning curve to adjust to and the first few play throughs may not be that enjoyable.