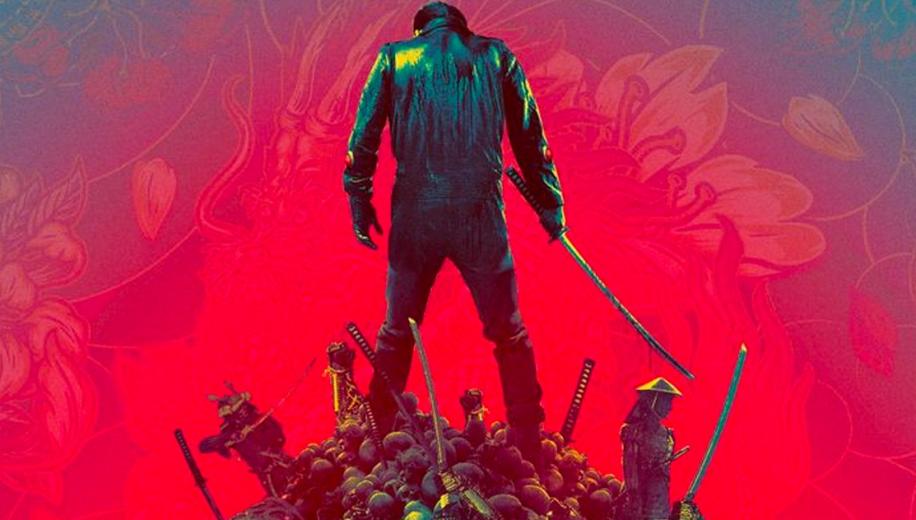 Prisoners of the Ghostland Movie

How do you make a cult film? Take a genre that already has a B-Movie or Drive-In following. “How about samurai movies?” Inject a crazy twist. “But this one is in set in a Mad Max wasteland with cowboys.” Hire a visually distinctive and slightly off-beat director. “We’ve got Sion Sono, the mad mind behind Tokyo Tribe and Why Don’t You Play in Hell?” Then, last but not least, hire Nic Cage. With Prisoners of the Ghostland all the ingredients for a cult film are right, but maybe it should have been left to bake a little longer.

In a post-nuclear Japan, bank-robber Hero is given an opportunity to pay off his sentence by rescuing Bernice, the “granddaughter” of The Governor, the corrupt ruler of Samurai Town. She’s disappeared, taken captive in the mysterious Ghostland. Hero’s task is to retrieve her within three days and, just to make sure he finishes the job, he’s outfitted with a body suit containing six explosives: two at his neck, one on each elbow, and one for each testicle.

Partly known for his adaptations of Manga to film, Sono is a ‘more is more’ kind of guy. His outré sensibilities have brought madness and mayhem to Japanese cinema for thirty years or more and, more recently, has developed a strong cult following in the West. Prisoners of the Ghostland is his first film in English and, unfortunately, it doesn’t live up to Sono’s best work.

At first, the incredible set design and costuming are enough to maintain engagement...

The film strives, almost embarrassingly at times, to manufacture that elusive ‘cult’ status but there is at once too many any ideas and too little variety in their presentation to push it to those heights. All the effort is put into the setup with a hope that the rest of the movie can coast by on its, admittedly spectacular, initial premise.

And coast by it does. A scene which demonstrates such promise in the opening minutes, an enormous gumball machine in a bank which is set dressed like an enormous gumball machine, is returned to so often, each time diminishing the spectacle, that by the time all the reveals about the scene have been made, we’ve seen it maybe four or five times. So much of the dialogue too feels like padding or dictated by the necessity for exposition that you might find your ears glazing over.

At first, the incredible set design and costuming are enough to maintain engagement, the production design of Ghostland really is a sight for sore eyes. Westerns and samurai movies have often had interchangeable moving parts, a fact that many of the greatest Westerns famously took advantage of transposing Yojimbo to A Fist Full of Dollars or Seven Samurai to The Magnificent Seven, and the juxtaposition of seeing them both on screen at the same time is ﻿frequently delightful. The dressing of a typical one-street frontier town in Japanese couture and Tokyo-neon lighting works a kind of magic. But the set dressing may as well be salad dressing when the actual content of the movie relies on neither of these genres for the tropes it utilises: those of the post-apocalyptic survival movie.

It’s from the various genre handbooks that the film coaxes its best performances. Frequent Rob Zombie collaborator Bill Mosely gnaws his way through his cowboy role as The Governor, so magnetic that everyone else on screen is made nearly redundant, only just outdoing Sion Sono mainstay Tak Sakaguchi (Versus) who performs sword for hire Yasujiro with serious charisma. Cage gets to do his stoic-until-he-goes-nuts routine, but he feels somewhat absent for the role. Even at the moment where he would normally let loose, he doesn’t even seem to go “Full Cage Rage” and for anyone waiting for that moment, it’s a pretty big disappointment.

That Cage’s character is called Hero gives you an idea of the kind of archetypal characterisation that Ghostland deals in. Broad strokes like this across the board foreground the delirious fun of the gonzo genre mash-up but they also have an alienating effect, preventing the development of any of the characters. Development, not in the sense of a character arc (of which there is a slight one) but in the sense of actually getting to know the characters in the first place in order to care one iota about what they’re doing or why.

This is not to say that the movie blows everything in its opening minutes. There are smatterings of greatness at a couple of points through the movie, some of which may even have a broader point to make about the genre tropes its utilises. Captured women who have their voices stolen, are dressed up and covered in plastic to look like mannequins make for both an arresting image and a thoughtful comment on the role of women in all of the genres which the movie takes its cues from. But those moments are too few and far between to make for a satisfying experience overall. It’s not helped by the fact that, as part of that conceit, the excellent Sofia Boutella is given relatively little to do as the runaway Bernice.

It's hard to imagine the film being destined for cult greatness, despite its more insane ingredients. Haltingly fun, peppered with hilarious nonsense, frequently gorgeous and ultimately a bit dull, Ghostland is imprisoned in its own premise, turning it into a film that is far more fun to describe than it is to watch.

In The Earth Movie Review