Create your very own Alcatraz! 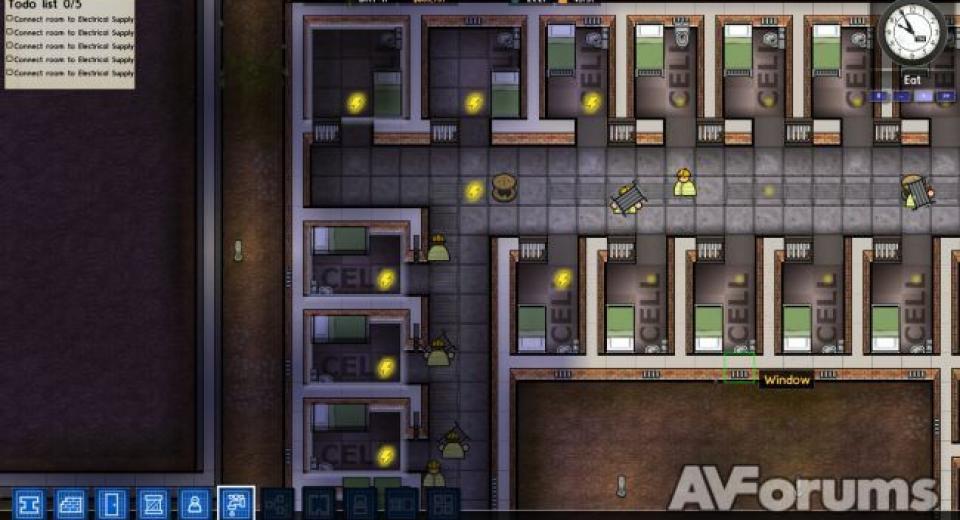 I love Theme Hospital. I loved it when it came out, and I love it now (public service: it costs peanuts over at gog.com, so buy it). In the 16 years since Theme Hospital was released, no game has come close to capturing the magic for me... until Prison Architect.

Developers Introversion Software have a fantastic track record of developing fascinating indie titles like WarGames-inspired Defcon, and the hacker-sim Uplink - both of which are well worth a look, if you’ve not played them already. Prison Architect is their latest, and at the time of writing it’s still in Alpha. Updates are pushed out monthly and the game is currently on version Alpha 11. In this case, however, unfinished doesn’t mean unpolished. Prison Architect is a top-down god-game along the lines of SimCity. You, as the omniscient eponymous Prison Architect, are able to co-ordinate the actions of your workmen, guards, and (to some degree) your prisoners, in order to create and ensure the smooth running of your facility.

The game’s art style is cutsey, colourful and engaging. Characters have something of the South Park about them, and there’s a broad enough range of models to ensure it’s rare two prisoners look the same. It’s interesting in a way that for all the variety in the prisoners, the guards are mostly homogenous and only really distinguishable from one another by skin tone. For an in-development game, the introductory tutorial is highly polished. It tells the story of Edward, a prisoner about to be executed for the double murder of his wife and her lover. The tutorial walks you through the basics of laying foundations, assigning buildings for a particular use, and buying required items. In the case of the tutorial, it’s about building an Execution Room for Edward. Through various contrivances, you also get to practice using the Utilities view, which is where you pump power and water around your prison.

Unfortunately, although the tutorial’s presentation is excellent, it falls well short of being comprehensive and I found myself spending quite a lot of time digging around in the wiki in order to know what was going on. But this is totally defensible: the game is in continuous development and so long as the final release covers the core mechanics I don’t think a little Googling around is too much to complain about at this stage.

The game proper begins with an empty plot of land and a road, not entirely dissimilar to that other classic god-sim favourite, Theme Park. You’ve got a relatively short amount of time before your first prisoners begin arriving so you need to get moving. A letter from Prison Architects Corp’s CEO points you in the right direction: hire a warden, build a Holding Cell, Kitchen and Canteen, and get a water pump up and running.

The tools available to you are split into six key menus, with others unlocked later. They are Foundations, Materials, Rooms, Objects, Staff and Utilities. To create the Holding Cell, for example, you mark out the foundations, and then use the ‘Rooms’ menu to designate the area appropriately. The Objects menu contains things like beds, toilets and so on, but it’s a busy list and it can be difficult to quickly find what you want. However, thanks to a very recent update in Alpha 11, relevant objects are highlighted when you create new rooms although a more intuitive organisation of items may be more helpful in the long run. It’s when the prisoners arrive that the fun really starts. If the conditions are poor or prisoners feel otherwise mistreated, there’s a chance their unhappiness could spill over into violence or even a full-scale riot. Escape attempts aren’t uncommon either, and it’s alarming and amusing in equal measure to see an inmate making for the exit with a set of stolen comically-oversized jailor's keys.

Government grants are available to further develop your prison. You receive money for building additional facilities or hiring specialised staff; for example, building an infirmary and hiring a nurse and a psychiatrist. Additional staff are the key to unlocking options and information. The warden - your first hire - opens up the ‘bureaucracy’ screen that will enable you to hire further support staff such as cleaners and gardeners, or unlock features such as deployment and CCTV. Some of these don’t yet do anything and will presumably be expanded on in future Alpha releases. As your prison expands, resources become an issue. Keeping eight prisoners in comfort is relatively easy, but it’s a difficult business to scale effectively and it can be challenging to stay in the black when you’re trying to manage 80 prisoners.

When I built my first few prisons I focused on ensuring the inmates had good-sized cells with bookshelves and windows, a shared common room with a TV, a big yard, and so on. However, such elaborate, high-quality facilities just aren’t sustainable in the long run and by my fourth or fifth prison I was building cells the size of wardrobes and not bothering to hire a janitor.

But Prison Architect has a way of getting under your skin by humanising its characters; your prisoners aren’t simply faceless avatars. Each has a full profile - a name, biography, details of their convictions. Characters like Glen Measday, a 34 year old convicted of kidnapping but who, like many in the game, pleaded not guilty. It’s impossible to know whether he did it, but as he was released after serving his time without incident I found myself genuinely questioning the rights and wrongs of how I treated him and the others.
I can see why people might balk at £19.99 for a game that’s not yet finished and is still a little buggy, but Prison Architect is already great fun. Having followed its progress through Alpha versions 9, 10 and 11, I feel confident in saying it will continue to go from strength to strength. Certainly one to watch.

Prison Architect is the latest from British indie developers Introversion. It's currently in Alpha stage but already provides one of the best god-sim experiences in years, as you construct and manage your very own Alcatraz. Choices about how you treat your prisoners carry a genuine sense of responsibility, a real feat given the cutsey nature of the presentation. Recommended.