Prince of Persia: The Sands of Time Movie Review 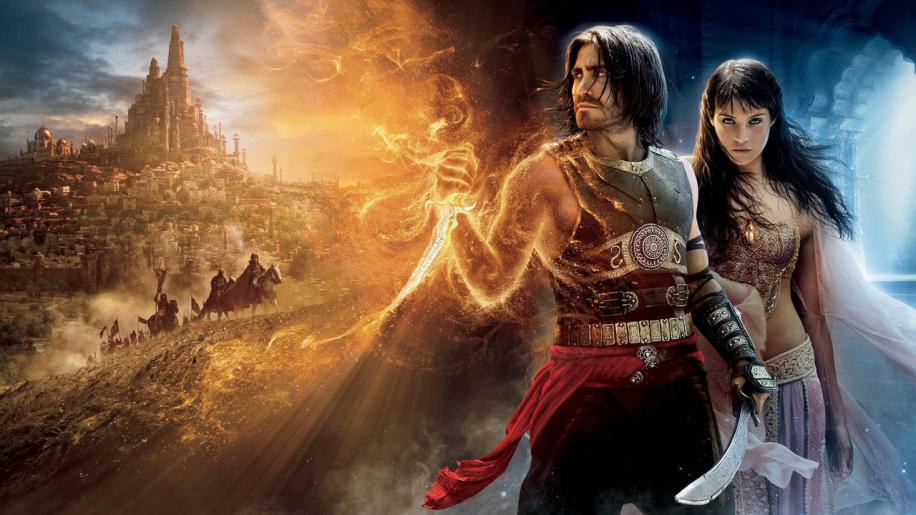 Video game adaptations have been notoriously disappointing over the years, neither addressing the desires of the established fanbase, nor being particularly accessible to wider audiences who are less familiar with the characters and subject matter. Everything from Street Fighter to Max Payne has been adapted, from Tomb Raider to Silent Hill, with everything coming across as a bit of a missed opportunity. Angelina Jolie's pneumatic Lara Croft may have looked good, but the films just didn't quite work at either bringing the game to life, or making for a strong female-based alternative to the likes of Indiana Jones. And Hitman was surely such a simple, easy story for them to adapt - but they could not even get that right. Perhaps the only successful (and I'm not just talking Box Office returns here) transition has been in the case of the Resident Evil franchise which, whilst offering up a bit of a spin-off story in the films when compared to the original games, has still made for three quite enjoyable, relentlessly entertaining zombie action-horror flicks. Admittedly only the first instalment was particularly noteworthy, but despite the flimsy nature of the sequels, they still draw fans back in, and the fourth entry - the first 3D instalment - looks to be as much fun as the rest.

Prince of Persia was one of those games I remember playing as a child, running across a flat platform and jumping from edges to ledges, double-tapping for a higher jump, and hopefully swinging myself to safety. I remember some of the jumps were so far that you only just made it - clutching on with one hand, desperate not to fall. Of course the frustration of the game was that you often did fall, landing in the spiky pits that were no doubt waiting below, or at least falling several levels lower which would force you to redo half the level. A simple game, I never really saw any potential for a cinematic adaptation, but with Gladiator paving the way for a decade of fresh interest in swords-and-sandals affairs, the latter chapters in the video game franchise proved to be much more substantial. Of course, with Disney's Pirates Franchise temporarily in limbo, the Studios needed something else to feed their fanbase with, choosing to adapt one of the game entries directly – Prince of Persia: the Sands of Time. Another one of these CG-dominated Blockbuster action-adventures following suit from the soulless Clash of the Titans remake, will Disney’s Jerry Bruckheimer-produced adaptation stand up to the critical eye?

Dastan is a young orphan who stands up to the Army of the mighty Persian Empire and, on the brink of being executed for his crimes, is pardoned and recruited by the King, who sees in him a surprising amount of courage. Brought up by the King’s brother, Nizam, he grows to become accepted as one of the King’s four sons – the others blood heirs. Fifteen years later and the sacred city of Alamut is accused of supplying weapons to the enemies of the Persian Empire. With Dastan disobeying orders and enacting a daring raid upon Alamut, the city falls to the Empire, and Dastan is recognised as a true hero. But when Alamut’s Princess Tamina explains that there were no weapons in the first place, and that the attack was ordered for other, more nefarious reasons, Dastan suspects a conspiracy within his own ranks. Unfortunately, clearly knowing too much, he soon finds himself framed for murder, dishonoured and disgraced, and on the run from his own men, with only the equally ‘wanted’ Princess Tamina for a reluctant companion. Will the two of them be able to get to the bottom of the potentially Empire-consuming mystery before they are caught and executed?

Let me start by saying that this definitely one of the better video game adaptations out there, possibly even a contender for the best, depending on how much you like what they did with Resident Evil. Now, this is not exactly high praise, as the standard to beat is certainly far from high, but it is – at the very least – fairly good news for the franchise’s fanbase. The filmmakers have not only gone out of their way to inject plenty of game references (not least the entertaining free-running set-pieces – reminiscent of not just the Prince of Persia video games but also the recent, excellent, Assassins Creed games) but they have also chosen to stage such scenes within a reasonably coherent and expansive narrative, a kind of shallow version of the Alexander or Kingdom of Heaven stories. Several characters are injected into this – and irrespective of the acting quality, which will be discussed later – they are almost all enjoyably colourful: some of them you even come to care about. All good so far. So where’s the rub?

Well, unfortunately, the caveat that goes with all the good that is within Prince of Persia, comes from its subtitle: The Sands of Time. This is, as many will be familiar with, a MacGuffin of ludicrous proportions. Integral to the plot, and yet also the single biggest flaw in the project, it introduces a magical dagger – the mystical object that everybody in the narrative is fighting for – which is fuelled by the eponymous ‘sands of time’ and uses said sands to send the wielder back in time. Although it can only be used for a limited time (until the sands run out, which takes you back just a few seconds), the sands which fuel it come from a far greater source – a source which, if tapped, could devastate the entire Empire. They could also – as is obvious within minutes of starting the movie – lead to the reversal of every single event in the movie. The effect of this, of course, is to remove any sense of danger from the proceedings. Every deadly situation the characters face is rendered lacking in real threat, every tragically fatal outcome feels inconsequential – as you know it can be reversed. Characters you care about, who you don’t want to die, are faced with death (or indeed do die) and you find your reaction to these supposedly significant events tempered by the fact that it could all be prevented using the time-travelling dagger. Oh, Dastan’s been stabbed has he? I wonder what’s going to happen next... Ultimately this massive gimmick leaves the film feeling quite inconsequential, which is disappointing, especially when you consider that you actually – initially – give a damn about what happens to these characters.

Acting-wise, it’s a bit of a mixed-bag affair. Personally I hated the fact that many of the cast members sported a rough East End-ish accent. It reminded me of Oliver Stone’s massively flawed Alexander (which has surely had the most number of Director’s cuts ever), where many of the characters sported an out-of-place Irish lilt. I have no idea why they chose this accent for Prince of Persia as, honestly – coupled with the slightly unnecessary, somewhat slapstick, humour – it gave the whole production the air of a Carry On comedy. Carry On with the Prince of Persia. Which (despite the Disney label) was surely not what they were going for?!

And Jake ‘Donnie Darko’ Gyllenhaal is not really an action star. Sure, he has noticeably beefed-up for the role, and now sports the quintessential action hero designer stubble, but (again with the unnecessary humorous silly-streak the character is given) he is still more comparable to Tobey Macguire’s Spiderman than Colin Farrell’s Alexander or Gerard Butler’s Leonidas (in 300). Yes, I know that they were aiming more for Orlando Bloom from the Pirates trilogy (or possibly even Bloom from Kingdom of Heaven) but neither rendition makes for a great action persona. And Tobey Macguire would be far less convincing as an action hero if he were out of costume, which is effectively what we get here. Even if you figure Gyllenhaal looks the part, he certainly does not play it right, although he is admittedly hampered by the doesn’t-know-whether-it’s-a-comedy-or-not script, and by a story which requires him to (eventually) do plenty of silly CG stunts. The fight scenes largely work, as do the basic parkour free-running sequences (they may not be Bourne, or Bond, but they are entertaining nonetheless), it’s mainly the bigger set-pieces that go too far over the top.

Gyllenhaal is paired opposite the hot Brit property of the moment, Gemma Arterton. Personally, I didn’t rate her at all as a Bond Girl (she looked more like Paddington Bear in her silly beige mac and boots) and thought that she was pretty forgettable in Clash of the Titans, so I’m not sure what all the fuss is about (is it that popular posh Brit accent at work again?), but she perfectly fits the part here as the indomitable, aggressive counterpart to Gyllenhaal’s frivolous action hero, Princess Tamina. And whilst she’s not striking enough to play someone iconic like Cleopatra, she is definitely, undeniably pleasing to the eye.

The numerous minor characters are brought to life by an ensemble (also British) supporting cast which includes Alfred ‘Raiders of the Lost Ark’ Molina (hamming it up to the extreme, but having quite a lot of contagious fun in the process), Richard Coyle (from UK TV’s Coupling), Toby Kebbell (excellent in Shane Meadows’s haunting Dead Man’s Shoes) and Steve Toussaint (from various UK TV shows like The Knock and The Bill), who gets one of the best scenes in the film – where two knife-throwing experts have a stand-off. And of course, fresh from his memorable turn in the terrific Scorsese/DiCaprio mystery, Shutter Island, we also get the ever-reliable Ben ‘Ghandi’ Kingsley, who brings a little bit of gravitas to his role as Dastan’s Uncle, the King’s brother. Doing his best impersonation of Ming the Merciless, few will deny that his acting talents are totally wasted in this movie, but (as with Molina), at least he looks like he’s having fun doing this kind of shallow, frivolous CG romp – and he even gets to do a bit of sword-fighting, which I bet he never expected to do in his career!

Overall there are two ways you can look at Prince of Persia: the Sands of Time – it’s either one of the best videogame adaptations out there, an entertaining and action-packed swords-and-sorcery adventure packed with fun characters; or it’s just another title jumping on the Clash of the Titans bandwagon, with a similar lack of depth – its substance little better than the lacklustre Pirates of the Caribbean sequels – and sporting a massive, stupid gimmick that renders the whole dramatic angle impotent. Personally, I quite enjoyed it for the most part – as far as switch-your-brain-off romps go – and was mildly disappointed by the effect of the silly twist. But there is still some enduring, undeniable fun to be had in this frivolous affair. It looks quite impressive, and keeps you visually entertained throughout, and even has some decent performances and some semblance of a plot to it. What more could you really ask for with this kind of production? Far from bad, you could do a whole lot worse than pick this up for rental for a Saturday night in.