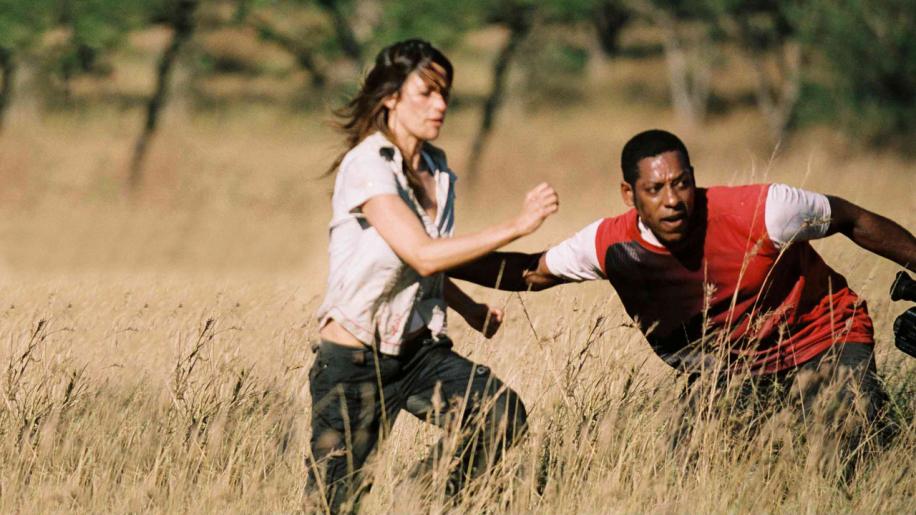 First things first, this is not the recent sci-fi series from ITV1, although the plot could well have lifted itself from it. This Primeval is a movie that seems to have snuck from out of nowhere, receiving no theatrical outing that I've heard of, at any rate, and practically no advance fanfare. So, for a blissful change, it was nice to sit back and watch something that I had absolutely no prior knowledge of.

Akin to the eminently entertaining The Ghost And The Darkness, Primeval purports to have been inspired by real-life events. The civil war that had been raging in the African nation of Burundi forms the backdrop for an adventure yarn that sees American journalists, German big game hunters and an English-sounding Steve Irwin-type investigating the terrifying legend of a super-sized crocodile that has been gleefully chomping down on the natives and UN peacekeepers dangling their bits and bobs in the river. A Texas Chainsaw-reminiscent title sequence has the image filled with newspaper cuttings, lurid headlines and photographs depicting the on-going carnage that had, up until this point, claimed over 300 lives. After a rapid introduction to the team - stubbly pressman Tim (Dominic Purcell) needs a big story to save the credibility of his paper, his jokey, jive-talking assistant Steven Johnson (Orlando Jones) just wants to go home, and cute new-age journalist Aviva (huh?) Masters (Brooke Langton) just wants to mix metaphors and save-the-world - we are whisked off to the gorgeous South African environments that dominate over ninety percent of the film, and pitched almost immediately into some horrible militia-orchestrated genocide, petty conflicts between Jurgen (Das Boot) Prochnow's croc-hunter and Gideon Emery's plummy croc-saviour and, of course, some pretty grisly interaction with the toothy big star, himself.

Nicknamed Gustav by the terrified locals, the legend has it that the beast has grown to immense proportions from feeding off the victims of the vicious tribal cleansing whose bodies have been hurled into the river. The film actually takes the audacious, but rather daft stance that it is, once again, we, as in mankind, who have created monsters through our own barbaric nature. Now I am not disputing this theory in general terms - the evidence of society's continual devouring of its own, and the effects this catastrophic and uniquely human trait has on the ecology speaks for itself - but the too-convenient genesis for this beast is a little heavy-handed for my liking. The film would have been far wiser to have kept within the remit of its own title. If Gustav had been some giant prehistoric throwback, then the story would have taken us back to the glorious days of the sci-fi sub-genre of gigantism running amok that boomed during the 50's. Keeping things simple by stating simply that the croc was a primeval offshoot would have opened up the film to a lot more fun, I feel. Because, as it stands now, debut-director Michael Katleman's thriller/horror hybrid stymies itself with too much tribal warfare and political skulduggery to appeal to the people who would normally buy into this type of picture in the first place. I can see why he, and writers John Brancato and Michael Ferris, fell for the idea though. Stirring some real-life issues into the ripping yarn is something that most makers of monster movies don't bother with. But it's funny that two of Primeval's influences, Alligator and Lake Placid, both contained social commentary as well as blood and guts.

The main thrust of the plot, you may be surprised to learn, is not the crocodile at all. He may be the reason why our bickering team are there in the first place, but he soon takes a backseat to the menace of the roving renegades hacking off heads and putting high-velocity rounds through the skulls of cowering captives. When sparky, wisecracking Johnson stumbles onto a vile execution and, being a cameraman, naturally captures the deed on film, he opens up a can of worms that leads to the team being hunted down by human aggressors even more cunning and deceptive than Gustav. In fact, a good proportion of the tale alludes to the sickening butchery of the local warlord who has christened himself Little Gustav and soon throws a net over the fleeing westerners. It is most certainly not a good advert for the Burundi tourist board. Another secondary story sees the plight of a poor, and often battered, tribal teen called Jo-Jo, who just wants to flee to America - and will do some pretty irresponsible things to convince the team to take him there. In fact, the amount of punishment that this kid takes in pursuit of his dream is quite staggering. If he is not drowning or being terrorised by the croc, he is being shot, kicked or clubbed. Then again, it seems that everyone in this film suffers enormous physical abuse, which is, to be honest, quite refreshing. Even nominal hero-boy, Tim, receives a thorough pasting for his troubles. It is as though Katleman is paying homage to the likes of Italian sicko-supremo Ruggero Deodato and his cannibal outrage-outings of the 80's. Both directors clearly revel in putting their cast through a violent wringer to see just what is left of them at the end, and there is a pleasing resistance to having Purcell's square-jawed good guy becoming the dependable one-man-army cliché.

Kudos must go the beautifully horrific moments of vehicle-instigated mangling. One character receives a truly shocking wake-up call from a land-cruiser that faintly recalls a similar thing in the original Final Destination. And later on, and not unconnected to this, a body is flung mightily over the roof of the aforementioned cruiser, and rapidly through the air, to land with a truly sickening crunch against the unyielding trunk of a tree. It is precisely this cheerful disregard to life and limb and overall coherence that will either turn you on, or off, to Primeval. Limb-chomping, Gustav-style, is in here, too, but it will be the man-to-his-brother cruelty that you will remember most of all from this movie.

By and large, the effects are good. Gustav can look absolutely amazing on occasions, particularly when he suddenly rushes out of the bushes and confronts his intended prey in wide-jawed close-up. Shots of him chasing people through the long grass are quite effective, as well, taking advantage of Edward J. Pei's invigorating cinematography. And the first time that we see him, full size, is a frighteningly impressive balls-out attack on a cage in which a very unwise human is hiding. This shot, especially, depicts the speed and agility of the beast with stirring alacrity, as he charges, and then leaps onto, the cage like a cat playing with a mouse. His movements are quite convincing, with those squat little legs (well, comparatively little to the rest of him) pounding away and his tail whipping around like one of the Kraken's tentacles from Dead Man's Chest. He inspires a genuine sense of terror whenever he is about, though Katleman fudges the tension that should have been rife during moments when the team activate an electronic tracking beacon that has been fired into him by not supplying any real pay-off to eerie bleeping on the monitor. An attack on a soon-to-be-shredded houseboat at first seems reminiscent of a similar sequence in Jurassic Park 3, but loses momentum by ending much too soon and then supplying a pretty ludicrous mid-air chow-down that recalls an equally high-rise demise in Deep Blue Sea. So, Primeval doesn't have a problem with being derivative, then. In which case, Katleman should have made the most of the moments when his cast fall into the water because the terror of floating helpless and vulnerable in an alien environment, when something huge and hungry is there too, is something that cannot fail to send shivers down a viewer's spine ... as in Jaws. Yet, these pre-requisite elements come over as short-lived and unsatisfying, Katleman preferring to elicit the creeps when Gustav has left the river. Thus, the film is much better when its set-pieces are in the thick rushes and out across the wetlands, when Gustav reveals that his power over the ground is just as devastating as in the water.

There are some great shock-cuts of those epic snappers narrowly missing their prey as they wrap themselves savagely around pesky, distracting branches, or get wedged through the back window of a 4 X 4. Katleman and his effects crew definitely reveal a talent for galvanising chase sequences and, even if we don't really care what happens to any of the core cast members, the sight of pathetic human limbs waggling frantically in a bid to ward off that colossal mouth from closing on them is never less than heart-lurching.

The CG can occasionally lapse, though. Moments of the rapacious reptile's fast-action spinning and whirling, the croc catching hold of his victims and making that infamous roll to shred them between his jaws for instance, can soften and blur, and the squishing bodies can look a tad too cartoonic. But, thankfully, these images are over so fast that you will hardly notice, and there is one terrifically squishy head-popping to look out for.

Overall, I suppose I quite enjoyed Primeval, although I must confess to being slightly shocked by the severity of the human story that runs concurrently through it. So, once again, I feel I must warn potential viewers that this may not be exactly the film you think it is going to be. For me, the thriller aspect actually works quite well, and it is pleasing to note, although it does get rather predictable, considering that it happens twice, that Gustav actually becomes the hero of the piece in certain ways in a better-the-devil-you-know kind of way. But the political statement that the writers strangle the horror story with really deserves to be in its own separate movie ... because, when all the running and the screaming and the shooting is over, it becomes apparent that they didn't have enough material to warrant a full-length monster movie. Or simply didn't believe that they had.

Still, Primeval, despite its glaring screenplay flaws, gets a brain-disengaged, carnage-lover's thumbs-up from me. I can't pretend that it is a great film - it truly isn't - but it does pass the time and certainly goes the extra mile in the violence stakes. And it's got a bloody big killer croc in it! What's not to love?