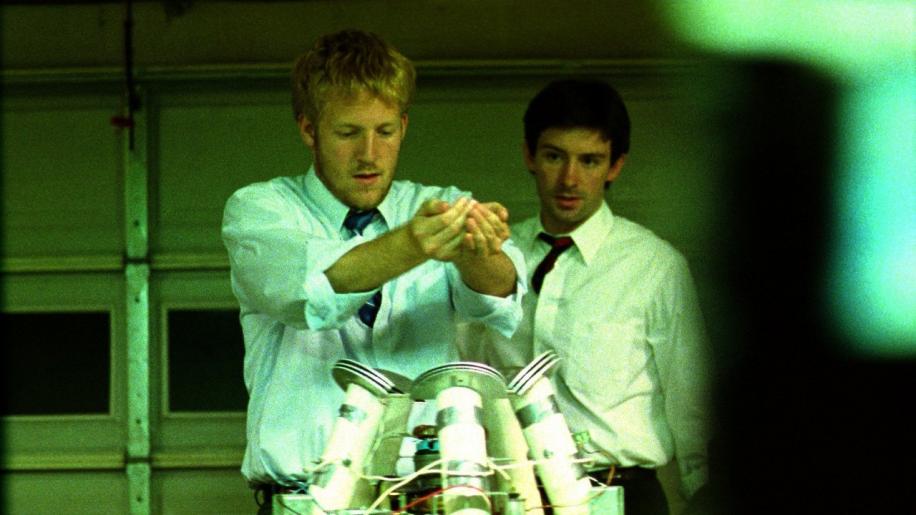 Oof! This is a very bad picture. At least technically, stylistics aside. I haven't seen this much excessive grain in a film since 'The Blair Witch Project'. In low level light situations the grain is like a swarm of bees dancing on the inside of your telly. The ultra low budget nature of the film really comes to the fore here. The lack of proper set lighting and the use of 16mm film with inconsistent camerawork really shows up in the print. The quality of the pictures shot outside at night is laughably bad. You have to admire their cheek for utilising them. The transfer itself is quite ropey as well, with drop-outs appearing early on as if it was mastered from a dodgy betacam tape. Most scenes have bad contrast, muddy blacks and the colours and skin tones are totally out of balance, not to mention many, many shots are soft if not out of focus. Shadow detail? Forget it. Practically everything about the film's presentation is wrong. It's crap... yet at the same time it's also bizarrely watchable once you adjust to the low quality images. Pleasant even. Because the film itself is well made and atmospheric one tends to be more kind to the cinematography. The blizzard of grain actually covers up practically everything that would mar things normally. With the lo-fi nature of the production, the rough-as-sandpaper presentation actually works in the favour of the film. It's nice to see something so unglossy now and again, but too many pictures like this would give you double vision. Like the picture, it's raw. It's a stereo surround mix and in a few scenes there is some separation but for the most part it's unclear. In interior scenes the dialogue is fine and easily discernible, but in exterior scenes the traffic and suchlike sometimes drowns out the voices which is bad for a dialogue driven film, particularly one with such complicated goings on. But again these cock-ups seem to lend it all a realistic, surreptitious feel. In the commentary Carruth mentions the poor location sound and that a lot of dialogue was dubbed. The lip synching isn't bad and you wouldn't notice it most of the time. Overall the audio presentation of this film is rather disappointing, but considering the film's humble origins it's certainly not a disgrace. Apart from a few run-of-the-mill trailers, the extras are composed of two commentaries. The first, by the main man Shane Carruth is very lively as commentaries go. He doesn't shut up for the whole duration of the film, speaking in a clear and incisive manner. There are no pauses or dead air at all, and he covers practically everything you can think of relating to making the film. As the film was so low budget the anecdotes are more interesting than the syrupy ones usually found on Hollywood films. Primer was a labour of love and it shows. His voice is pleasant to listen to, unlike a lot of commentaries with droning, monotonous voices that send you to sleep regardless of what they're saying. Very good. The second commentary is by Carruth and the crew, who also happen to be the cast in most cases! There are seven of them in the booth and only one was not onscreen acting. It's also a lively commentary. It reinforces the fact that they were all amateurs just winging it when they made the film, and that the whole thing is quite an achievement. Primerhas the rawness and bravura of a dogme film crossed with the aloofness and technophilia of a Cronenberg feature. It's an auspicious debut film that deserves wider recognition. Strangely, rather than any particular time-travel film this movie reminded me more of In the Company of Men where two office types also meet up to discuss and plan shady things. It's a challenge to figure out what's going on, and I'm still not sure if it's down to the cleverness of the script or just muddled storytelling in the final act (or both). It demands several viewings to figure it out. However, some will definitely find it hard to sit through even with its short length. It's not light entertainment, that's for sure, but it is a gutsy and original piece of work.