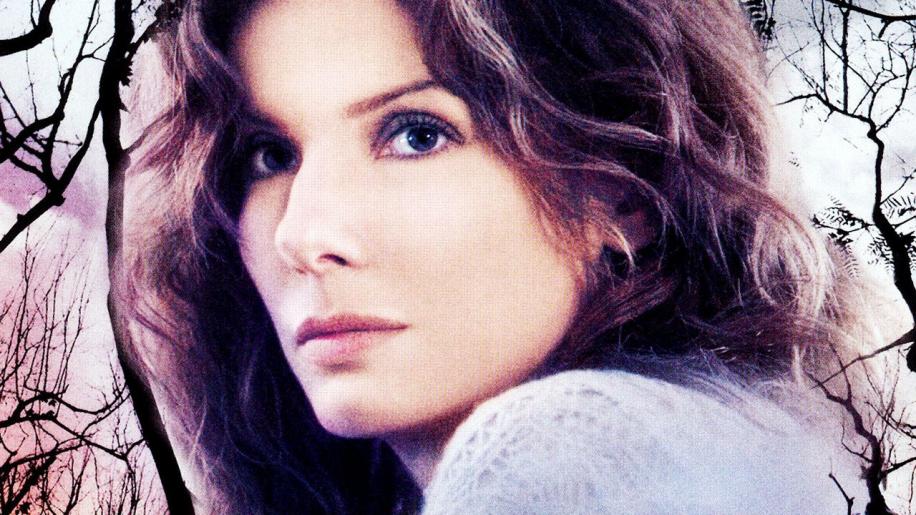 Misleadingly touted as an out-and-out supernatural spooker, Premonition nixes such thrills in favour of a more modulated and serious psychological examination of a marriage tumbling into the abyss. But, director Mennan Yapo (in a movie-helming debut) works hard to invest his moody movie with plenty of weirdness and time-altered tension, just to dress things up a bit with some brain-bashing complexities. Well ... dress them up a lot, if I'm honest. Told from the point-of-view of Linda (Sandra Bullock), whose seemingly content world is about to become seriously un-glued, we are forced into the Ray Bradbury short-story-like concept of one person undergoing a series of unexplainable events that may, or may not really be occurring. When Linda gets a dreadful visit from the local Sheriff to inform her of the tragic death of her husband (Julian McMahon) in a horrific car accident she naturally lapses into shock and disbelief. Along with her two daughters she struggles to come to terms with the loss and manages, eventually, to drift off to sleep that night. However - and here's the terrific clincher, folks - when she wakes up the very next day, there's her husband, Jim, very much alive and making breakfast. Was it all just a bad dream, then? Things get decidedly odder when, after making it through another perplexing twenty-four hours, Linda faces a new day that sees her nearest and dearest preparing for Jim's funeral. He's gone and died all over again!

This confusing and darkly tragic cycle of events carries on, day after day, with Linda finding herself in a time-distorted battle to make sense of what is happening, what is real and just how she can save her husband's life from the accident that fate keeps reminding is imminent. But, craftily, Bill Kelly's script throws a further couple of spanners in the works. For instance, how did older daughter Megan receive all those cuts to her face and head? And just what is the relationship that Jim has with his cute blonde work associate, Claire. Linda has a definite struggle on her hands. The days switch around and she becomes increasingly like a detective stepping in and out of time, unravelling the clues to things that her stale married life has blinkered her to. Melodramatic, bittersweet and tinged with marital pathos, Premonition straddles a couple of genres, yet somehow lessens the effect of either with its sulking attitude. At times reminiscent of the old TV show Sapphire And Steel (who remember that, then?) and at others like a dreary ITV1 kitchen-sink drama, Yapo's film struggles to marry up the supernatural with the monotonous.

Although it is hard to dislike Sandra Bullock, I have never regarded her as a good actress. Career-boosting roles in Speed and then Crash may have been, by turns, popular and critically appraised, but she is forever in my mind a wittering, whiny scatter-brain who just looks extremely attractive on the Miss Congeniality poster. Nothing more. I may sympathise with her predicament here, I may be drawn into the Twilight Zone-style mystery that she is combating, but I just can't warm to her at all. Ditching the ditzy, girl-next-door charm simply is not enough to have me care about her dilemma. I suppose I should really be praising her performance as she does, at least, convince us that her husband should indeed be contemplating an affair with the far more intriguing and exciting Amber (Transporter 2) Valletta. Home-life seems glum and repetitive. She never smiles and there appears to be a cloud permanently lodged over her head, even before her hubby keeps dying on her. In fact the movie would have worked better if told from the husband's point of view. One day, he's dead. And happy. The next he wakes up next to miserable Sandra Bullock. Aaaarghhhh! The next day he's dead again. Wow ... phew ... thank God that nightmare's over. Next morning ... Oh no ... there she is again! How does he escape the horror and stay dead forever? Now that would be a far more exciting and terrifying scenario, wouldn't it?

Then again, MacMahon is no great shakes in the empathy department either. Hardly an accomplished actor - it doesn't do be one of the worst things in the already sub-par Fantastic 4 franchise, does it? - he mumbles through his role here, reminding me, with every shot that he is in, of the annoying Billy from Ally McBeal. He has a kind of constipated approach that just grates on my nerves. I understand the emotional turmoil he is supposed to be experiencing, but just look at his turgid, rock-like performance when Bullock's Linda is seducing him. Somehow, this scene, instead of being poignantly natural and somewhat desperate, made me feel very uncomfortable. Sadder still, is the toned-down performance from Amber Valletta, who, one glamorous scene notwithstanding, is only smuggled into the film as a kind of afterthought, even though she is, perhaps, the most pivotal character involved. Thankfully, the child actors who portray the daughters are effective enough in moments of grief and subdued mourning. And I did like the way that Linda uses them as emotional weapons during a strange game of cat and mouse that she plays with Jim. “Tell Daddy how much you love him,” she asks of them, before switching tactics and insisting that the guilty Jim return the sentiments.

Ironically, Yapo's direction, for a film that is primarily un-eventful and largely consigned to one house, is good and involving, despite all the misery it piles on. There is nothing spectacular, barring the big moment at the climax, but Yapo has a focussed style that makes the most of the limited set-ups, locations and the straining twists and turns of the plot. But the thing is, that title of Premonition is not strictly accurate with regards to the situation that ensues. Just like the great Spielberg/Hooper collaboration “Poltergeist” is hardly an authentic example of typical poltergeist activity (what with graves opening up all over the place, trees gobbling up brats and little girls being sucked into hellish limbo), Premonition uses the word as a catch-all umbrella for a loosely-connected theme that takes in such bizarreness as time-dislocation, event-repetition and acute paranoia. The Groundhog Day scenario is wacky enough to grab the attention from the get-go and the disturbing sequence that sees Linda hauled off to a psychiatric hospital is quite powerful and benefits from a shocking sense of her utter futility in the face of unfeeling authority. But the development of Linda's detective work into the weird goings-on and especially the finding out of Jim's secretive assignations stretches things in a more laborious than suspenseful fashion. Sadly, what Jim is really up to is signposted much too brightly and early on for us to experience any sort of surprise. Thus, it is left to Bullock to keep events rolling. But seeing things through her eyes does become irksome and the film dovetails into a treatise on suspicion, doubt and persecution which destroys any delicate frisson of the uncanny. The little map she draws up of each day's probable revelations is a clever contrivance, though.

Klaus Badelt comes up with a score that keeps the film on track, boosting the atmospherics and the unease and painting the tone with sombre anticipation, dread and a pervading sense of inevitability. It is doom-laden, but fitting. A visit to a priest to explore the deeper meaning of precognition is nicely done, but still feels like a contrived attempt to keep the religious quarter of the audience happy . Peter Stormare's psychiatrist is smartly rendered as potentially both a saviour and a villain and the most intense sequence, by far, is the “forced” trip to the funny farm. Though, ultimately, the film is unclear which path it wants to follow - the domestic repatriation or the existential chess game that Linda plays with fate. Is she being tested? Punished? What? Does Jim bring the inevitable upon himself, or is this all for the greater good? Mixed messages, I'm afraid. Kelly, who also handled the theme of time-alteration with the breezy Brendan Fraser vehicle Blast From The Past, gets a thumbs-up for concocting such an in-your-face scenario. But, with a little more thought and perhaps a further couple of jolts to wrong-foot us along the way, the final film could have been a whole lot better. As it is, I was content enough to play along with the plot, yet still found it hard to care about what the eventual outcome may bring

Intriguing, then ... but disappointing.