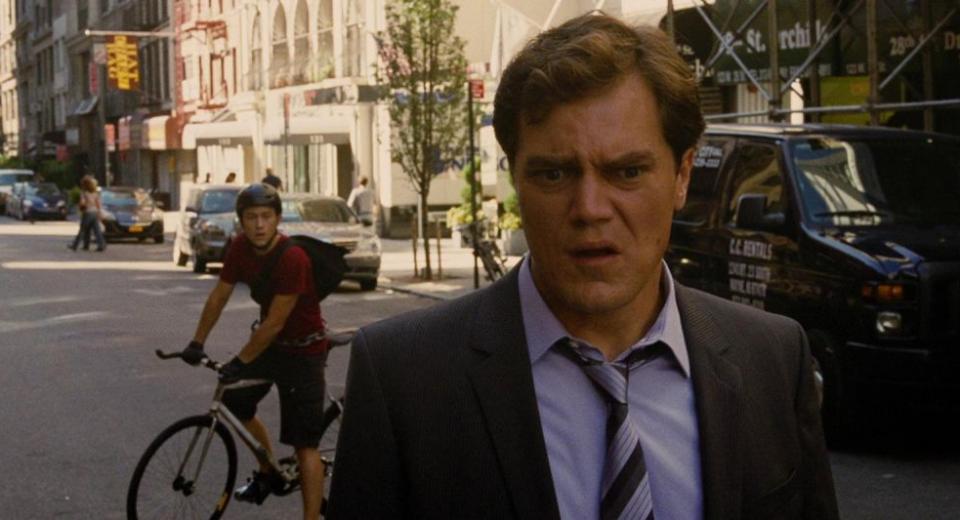 Fast and sometimes quite fun, Premium Rush is happy to sacrifice serious thrills in favour of lightweight laughs but, unfortunately, ends up being pretty throwaway entertainment as a result.

There are plenty of films that may come to mind while watching it - from Run Lola Run to The Transporter; from Die Hard with a Vengeance to The Fast and the Furious; from Point Break to Next - but they are all better movies. Yes, even Next. Trouble is, the film has been made with the same frivolous tone as Charlie's Angels, which really does not work in a supposedly tense thriller. This kind of blend works rarely, like in the French Taxi movies, but it's tough to pull off. Admittedly, Premium Rush is just about the best movie you could imagine ever being made about bicycle couriers, but I'm not sure whether that is any great compliment either.

For the most part, the fast-paced 90-minute flick will keep you entertained, but the odd blend of semi-serious thriller story with comedy characters; of fun but gimmicky effects and occasionally impressive bike stunts, lacks even a hint of residual value. Come the ninety-first minute – the minute after the credits roll – you’ll have forgotten the whole thing and you probably won’t be in the least bit bothered about ever watching it again.

The story follows Wilee, the fastest bicycle courier in New York City. He rides a beaten-up old bike with no gears and no brakes – he believes he doesn’t need them – relying on a near-supernatural power of foresight to be able to calculate the different routes; obstacles; and potential death-traps along the way. His latest assignment is to take an envelope across the City: a simple task which Wilee doesn’t give a second thought to. There are others out there, though, who also want that envelope, and will do whatever it takes to get a hold of it. Will Wilee be able to deliver it on time? And, more importantly, will he make it through the day alive?

There are plenty of nice ideas in Premium Rush – or at least there are plenty of borrowed ideas which have been nicely incorporated into the film – but the premise is pretty flimsy; a lightweight frame which could never hope to possibly sustain any serious thrills. So they don’t go for a dramatic thriller, they go for a sometimes serious, sometimes silly affair which neither sparks off enough humour to keep you chuckling, nor pumps adrenaline through your veins with its intensity.

It has its moments. The introduction to what Wilee does for a living is entertaining enough; his Next-like ability to predict a series of different outcomes depending on which route he takes is a nice, if cheap, touch; and the initial confrontation between Wilee and his relentless pursuer gives you the impression that this could get very serious very quickly. Indeed the tension builds quite efficiently right the way until the midway point, where the other couriers get involved. Then, all of a sudden, it dissipates.

The non-linear style has been done to death now, but even that isn’t used so badly here, allowing you a nice insight into what the hell is going on, after the fact, and slotting the pieces of the puzzle in place in a satisfying way, but, aside from the storyline involving the determined antagonist, there are quite a few threads which remain pretty lightweight. Unfortunately, the turning point; the primary stage where all of this gets explained, trails any built-up tension into nothing, and instead leads into an utterly unnecessary bike chase through the New York streets – you know, one of those chases where, if the characters just talked to each other, it wouldn’t need to happen.

I suppose I shouldn’t quibble too much, this is the kind of lightweight movie which Jackie Chan (Police Story, Armour of God) made his name peddling. The difference, of course, is that Chan is an impressive action director, choreographer and stunt performer and the action in his movies is normally jaw-dropping enough for you to forgive most of the rest.

After all, David Koepp is an extremely successful screenwriter (having worked on Mission Impossible, Carlito’s Way and Jurassic Park) but a considerably less successful writer/director (Secret Windows, Ghost Town), and, unfortunately, his writing career has been dragged down too, ever since he started dabbling in directing (he contributed towards the script for Indiana Jones and the Kingdom of the Crystal Skull). Premium Rush is still probably his most accomplished writer/director feature but, whilst Koepp does reasonably well in both camps, he neither feels assured enough to deliver ultimate thrills on the action front, nor is he capable of crafting a witty script which will keep you entertained even when the wheels aren’t spinning.

You may wonder why Joseph Gordon-Levitt (Looper, Inception, G.I. Joe) signed up for this piece. I suppose he hasn’t done many lead vehicles, and perhaps he wanted to capitalise on the fame that Dark Knight Rises brought him, but I’m not sure whether this was the best choice. He’s an affable, charismatic lead, but you don’t really fully understand why he prattles on about ‘feeling the rush’ and you certainly don’t need him going on about how he sacrificed his law degree to be a bicycle courier; that never seems convincing (c.f. Matt Damon in Rounders). He’s good under pressure though, and they manage to make the most of him on the road, although I was personally quite surprised about both the slightly cheap-looking effects shots and also the prevalence of Levitt’s stunt-double, who can be spotted at least half-a-dozen times in clear profile. Sure, I didn’t want his face to be CG-ified onto the rider like Daniel Craig was at the start of Skyfall, but it does take you out of the movie when somebody who is quite clearly not the starring actor rides directly towards the camera.

Opposite him Boardwalk Empire’s Michael Shannon (soon to be General Zod) makes for an engaging antagonist, even if he doesn’t exactly break new territory with this role. The rest of the supporting players do fine (American Reunion’s Dania Ramirez, Sucker Punch’s Jamie Chung and TV soap actor Wolé Parks), although they are all pretty lightweight; the kind of actors that wouldn’t be out of place in Street Dance 7.

All in all, Premium Rush will likely entertain you for the duration. It has a reasonably good start which, somewhat expectedly, tapers off halfway through, but retains enough fun and spark to just about keep your attention all the way to the finish line. It has enough flashy visual gimmicks, bike races and stunts, and input from the two more charismatic leads to make for enjoyable if throwaway fluff. Sure, there’s nothing particularly satisfying about this flick but there’s also nothing wrong with it. If you fancy something light and fluffy; fun and frivolous, then give it a whirl.