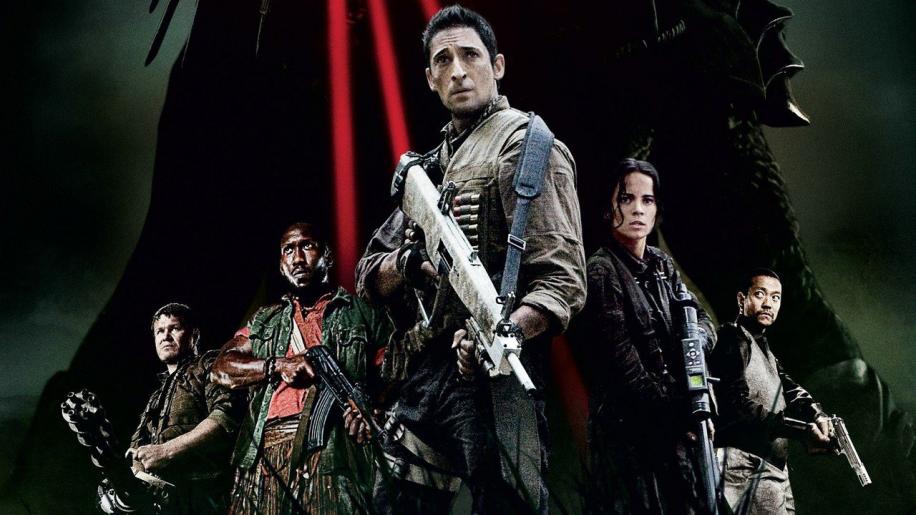 Opinion may be split about the quality of the recent Aliens Versus Predator films, with some feeling that it undermines each series, but one thing is for sure, it has reminded audiences quite how long it had been since we saw a genuinely iconic monster created. The idea of throwing two big hitting extraterrestrials together has long been established in comic book form, and though the results arguably weren’t as striking on film, they certainly whetted our appetites for more green-blooded splatter. This has played perfectly into Robert Rodriguez’s hands, as it acts as a fitting launch pad of expectation and hunger for his reimagining/remake/reboot, call it what you will, of the Predator licence. Sadly, and to many fans’ chagrin, he chose not to take the helm himself, but hand over directing duties to another. The name Nimrod Antal may not be the name that was on the tip of collective tongues, and his rather uninspiring 2009 heist flick Armored may not fill many with optimism, but his little seen 2003 thriller Kontroll proved he has the capacity to keep audiences on the edge of their seats as well as confront us with some unique characters and a healthy dose of pathos and black humour – what better formula to re-inject into a franchise that has been stripped of much of its respected stature in recent years?

We are thrown straight into the action, as a camo-uniformed man, we later come to know as Royce (Adrien Brody) wakes up whilst plummeting through the atmosphere, desperately trying to open his parachute. No sooner has he hit the ground then he is confronted by one after another of the other unfortunate seemingly somnambulist skydivers. In a classic comic book move, every one of the stranded members of this group is an instantly recognisable stereotype, complete with their own type of weaponry, that would feel instantly at home on a character roster of a low grade videogame. You have the mercenary Royce (Brody), the IDF sniper Isabelle (Alice Braga), the Spetsnaz minigunner Nikolai, the RUF rebel packing his AK47, the US prison inmate on death row, the Los Zetas cartel enforcer (Danny Trejo) and finally a yakuza and a doctor. Only Brody escapes looking like an illustration from a pulp comic cover as the kitsch simplicity of the characterisation starts to grate a little with the subject material. Those hoping for a darker reworking that moved away from the Alien Versus Predator camp action will be sorely disappointed. The yakuza hasn’t really creased his suit in freefall, Trejo is a caricature with his denim and polished belt buckle and the doctor just has to be seen wearing glasses. This groundwork should prepare audiences for a feature that lacks subtlety, even in comparison to some of the more outlandish moments from the original feature.

Soon our motley group do a spot of hiking and realise that they may not be in Kansas anymore as the camera pulls back to reveal numerous planets nearby not of our solar system. Shock horror, this being called Predators there is little need to flesh out the scenes where it is surmised that they are to be hunted by something on this alien planet. A few leaps of logic are made, but there’s little harm in skimming over such a monumental discovery when in essence anyone watching will know what the score is and why they are there. The script bounces around a little from the serious to the playful, but despite a few humorous asides, mainly from the playfully sociopathic convict, never delivers anything comparable to “Stick around”. The greater crime is a minor observation, which I won’t spoil, that could almost have neon lights above it, such is the immediate likelihood that it will reoccur in some form later in the film and prove to have great significance. The action soon kicks in though and it is then that you realise why you are watching this film. A few new extraterrestrial creations have been thrown in here for our merry band to dispatch and once the bullet casings start flying there is little respite for several minutes. The beasts are shot, stabbed and decapitated amongst the melee and what strikes you is just how at home Brody seems in the action man role. Now, he’s no Arnie, but as a side-step towards a more traditional looking soldier he makes more than an adequate leading figure, seemingly capable of cutting a swathe through enemy combatants be they human or not. His voice may be a touch on the intentional hoarse “I need a strepsil” side, but it never descends into parody as it might have.

Like Tim Burton’s Planet of the Apes, Predators doesn’t really need to pick what it wants to be, being at once a viable sequel, alternate take etc as well as a straightforward film. What becomes instantly clear though is that every effort has been made to set viewers into a familiar frame of mind as many of the staples that made the original film so identifiable in the marketplace of the day are back. No sooner has Royce crashed through the canopies of the strange trees than a mini-gun has started spinning and foliage is being cut down by the infinite spray of bullets - walk in at this point and you could be watching the original film. The recurrences don’t stop there though. Adding to central tough guy soldier, the weaponry and the hot and humid jungle location, even Alice Braga appears to be a pretty decent likeness for Elpida Carrillo who played Anna in Predator. Throw in a few hidden booby traps and the final reel giving us a pointlessly macho non-firearm based act of defiance (as was the case with Billy) against their beastly adversaries as well as a mud covered hero and just about all the best elements of the first film have been emulated to some degree.

So what of the new ideas thrown into the mix? Well for one we get to see what a hunting party of predators’ camp looks like. Unfortunately it isn’t much to write home about. The set appears small and constrained whilst the various paraphernalia lying about are mundane to say the least. A skull here, some strung up skinless animals and piles of offal don’t compare to the thrill felt by audiences when they spied a xenomorph skull at the end of Predator 2. Similarly, the extra gadgets grate, with the mechanical hawk and numerous HUD filters in their masks making it seem as if hunting for these beings is largely a point and click affair that takes place mainly at a distance. The sport element of the original films is sorely lacking until the final few encounters, by which time you’ve likely tired to some extent of the constant aimless shooting which seems to be trumped by close combat slicing and bludgeoning. The lesson being that if you’re a crack marksman, firing a thousand bullets will never kill one of these monstrosities, but a samurai sword may do. Gore is also lacking for large parts, as the hanging corpses of freshly skinned prey are no longer shocking and the hound-like animals used by the predators which make healthy cannon fodder are computer generated and never seems wholly tangible. There was always something oppressive and faintly sadistic to the violence in the original films, but here that same toying and hunting just lacks a punch.

It was arguably the logical next step for the franchise, to head off to another planet, but essentially the location makes very little difference in terms of plot as we’ve all likely seen weirder jungle flora/fauna on an Attenborough documentary. The essence remains the same, you still have a case of hunter and hunted. There may be a whole predator hunting party present here, but the fact that they are rarely shown doing much for large parts of the film other than toying with their prey could almost give the impression that this is a few alien lads having a lark about on an intergalactic stag weekend (they even tie a mate to a futuristic lamppost!). The nods to the first film are really the main draw, and the kitsch, Dirty Dozen style characterization makes for an easily watchable, if unscary ride. I doubt this is enough to kick-start the entire series, but it is mindlessly enjoyable fun that, for better or worse, sits closer to the recent outings of the dreadlocked big game hunters than the more acclaimed and ultimately satisfying Schwarzenegger/Glover outings.