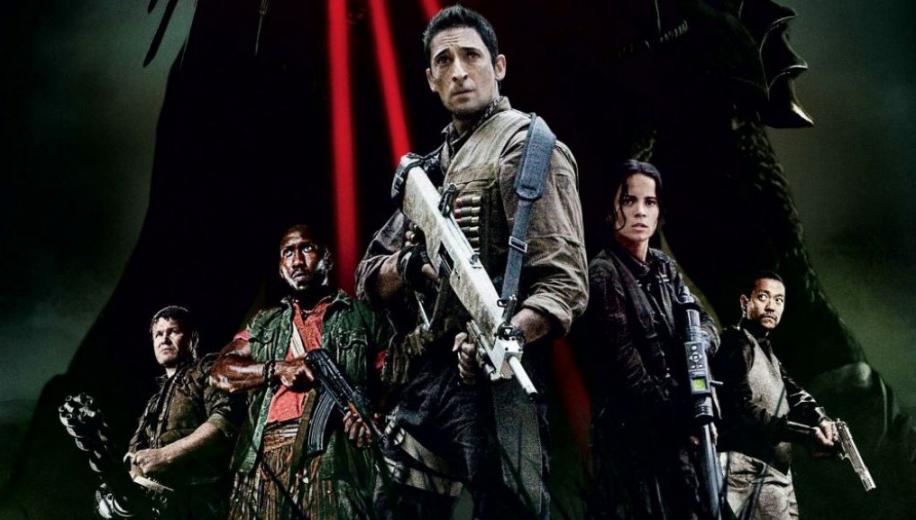 We're being hunted. The cages. The soldier. All of us. All brought here for the same purpose. This planet is a game preserve. And we're the game.

Excluding the dire AvP movies, there hadn’t been a Predator movie in 20 years; and it was up to director/producer Robert Rodriguez to bring them back. Reportedly learning what to do, and what not to do, from the first two films, Rodriguez put together a script, which went through numerous changes before bringing director Nimród Antal on board and a final screenplay was ready.

Taking huge cues from the original - we’re back in the jungle, there are a team of eight humans and they are being hunted by Predators. But to wrench it up a notch, the jungle is an alien planet, the human team are warmongers who are stingers to each other, and there are not one, but three Predators to contend with. And they are not your common or garden Predators; they are ‘super’ Predators, all new and all bad. (I am reminded of the line, “consumers want them bigger, louder - more teeth” from Jurassic World, for that is literally what we have here!)

Whilst there are a number of twists, turns and reveals, the basic premise boils down to the humans being hunted – so why does it take such a long time before any Predators are revealed? Of the motley crew of humans, there are some decent ideas (loved the Yakuza and his one-man stand-off) and characters, but the against type of Adrien ‘nose’ Brody as Royce, and his gravelly voice, seems so out of place as to bring me out of the picture. Antal directs with a sure hand, though, the film has a good pace and delivers on the action, gore and ending. But ultimately it lacks charm and never quite lives up to expectations, this leaves it in a middle ground somewhere between film 1 and 2 in terms of enjoyment and engagement. Given that this is an up-scale the image on show is really quite nice, while the increase in resolution available doesn’t afford much in the way of improvement to the detail, the WGC and HDR do propel the picture to something else.


WGC and HDR do propel the picture to something else

There is an increase in detail. But you have to really look to see it; pause scenes, be 3 foot from the screen, that kind of thing; there it is possible to find slightly keener edges to buttons, clothing weaves, skin texture. Though in truth it is barely noticeable; what I did find was that digital noise is slightly reduced, so backgrounds are better resolved, especially jungle flora and mist. But where this image does become something is with the colour palette; check out how lush the jungle looks now, how the sunlight shines off the leaves and how skin tones react to the light. Primaries are strong and bold now; check out the flairs in mining vehicle hideout – how bright and vivid the red is, how blue the blue is; the Blu-ray simply can’t compete here. Likewise the CG matte of the alien skyline, how gorgeous it now looks.

Black levels are very strong, there is a new depth to frame and shadow detail is revealed where there was none before; while the white end of the scale shows up even more; I’ve mentioned the sunlight streaming through the leaves, it’s worth saying again as this looks so natural and bright. The climactic fight in the campsite, bathed in firelight, is wonderful, checkout the Predator’s armour now!

Digitally there were a few instances of banding with torchlight in the mining vehicle, but that was it. The source is clean and without issue. Once again, no upgrade to the sound, just the same DTS-HD MA 5.1 track that has been available before. There is a decent sense of atmosphere with this track, the surrounds combine to bring to life the ambience of the jungle, reproduce the confines of the downed spacecraft well and fill out effects well. Gunshots, explosions, galloping animals, Predator gun fire are all well realised and given good directionality across the surround stage. Bass is tight, and fleshes out plenty of LF effects, though it seldom delved that deep. The score is well layered into the mix, and dialogue is dominated by the frontal array, sounds perfectly natural and given some directionality when required. A serviceable action orientated surround track that makes full use of the environment. There are no new extras, just the same material that has been available before, and most is housed on the included Blu-ray.

UDH
Audio Commentary – With director Nimród Antal and producer Robert Rodriguez give their views on the film, its production and their mutual love for the franchise; Rodriguez tends to give a non-stop verbal assault and this is no different, so Antal does get left behind a tad.

Blu-ray
Audio Commentary – As above
Robert Rodriguez presents Motion Comics—Exclusive Prequel Vignettes– 2 short ‘motion’ comics entitled: Moments of Extraction and Crucified.
Evolution of the Species: Predators Reborn – A 40 minute making of feature (broken into 6 segments playable with a ‘play all’) that comprehensively covers the production of the film, through scripting, to casting, to locations, designs and filming.
The Chosen – Quick look at the human protagonists.
Fox Movie Channel Presents: Making a Scene – Promotional material for the film, light and fluffy.
Deleted and Extended Scenes – Total run time of about 11 minutes containing 9 trimmed or excised scenes. Back after a 20 year absence, Predators, is a follow up to our favourite alien hunter, that expands the lore and transports our human prey to a distant world. Taking cues from the original (human team being hunted in the jungle) but moving the actoin to an alien world, works well, even if the casting is suspect. The new Predators are fun and there is plenty of action; but it doesn’t quite manage to meet the expectations sitting somewhere between 1 and 2 in terms of enjoyability.

As a 4K set the disc from Fox is pretty good; the up-scaled image shows barely any improvement in detail but blows the Blu-ray away in terms of colour reproduction, brightness and black level. The same DTS-HD MA 5.1 surround track as has already been available adorns this release; it’s encompassing and effective, and the same extras are trotted out again.