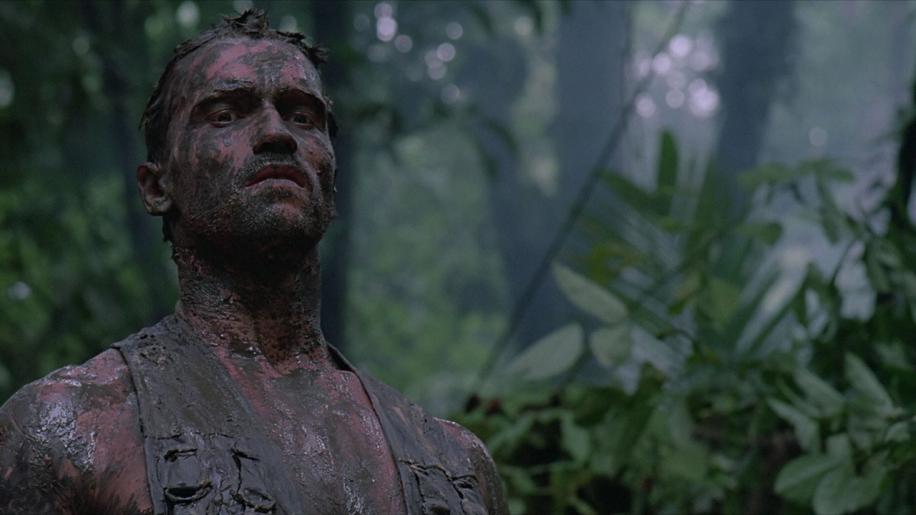 Have you ever seen the Mona Lisa? I have and I have to admit that, unfortunately, found it singularly unimpressive. Yes, ok, it's the single most recognisable painting in the world and its value to as both a picture and an icon are unquestioned. But still, hidden behind inches of bullet proof glass and throngs of people twenty deep, to physically see this painting is an art unto itself. And it's so small! When discussing the star of tonight's feature it is not normal to bring up such artsy references, his own body of work lying somewhere between balls and brawn, but, unconventional as it is, there is a parallel to be drawn. Much of Arnie's work is also singularly unimpressive. Oh, it's not all bad, all his collaborations with Jim Cameron have forged spectacular results, their first propelling him well and truly into the limelight. But outside that there really is very little that one can call worthwhile, a few blips on the radar possibly, something to rouse a peak of interest, but nothing that stands out. Well, all but perhaps tonight's feature. Just about the only film that makes a mark as a 'good' and one I remember wanting to see some twelve months before its cinematic release in this country. I have vivid memories of seeing a TV ad for it, during some Channel 4 early evening entertainment show (can't even remember its name - played Falco's Amadeus during the same show though) and one that made a lasting impression on me. I caught it at the cinema, on VHS and it has stayed with me; all through that time I've enjoyed it. All through the various incarnations that I've owned it, the picture has always suffered as being a little murky. So it is with great anticipation that I spun this Blu-ray.

Dutch (Arnold Schwarzenegger) is the leader of a crack squad of army marines that specialise in rescue operations; a kind of 'A-team' called in to get a job done when no one else can manage it. It is this very facet that sees them called in for a job by the CIA, headed up by Dillon (Carl Weathers) an old comrade of Dutch's. Agreeing to do the mission, albeit reluctantly under Dillon's command, the team head deep into enemy territory to rescue a downed helicopter, or at least that's the cover story. Once in the field and after the mammoth destruction of an enemy encampment, all is not what it seems. And to make matters far worse, the crack squad are being hunted by something out of this world, something that has already taken out a previous rescue attempt and won't be happy until it has all its trophies.

It is a very simple story and one that is instantly recognisable, the film has been around now for twenty years (!!!) but it is easy to forget quite how fresh this film was back on its release. In fact it's still pretty fresh now, only the HUGE glasses giving away its age. First time writes Jim and John Thomas coming up with a script that bowed to the action star generation and gave them an alien for the eighties. It's only weak spot, the characterisation of Arnie and his cohorts. The bonding scene in the helicopter at the beginning serves to highlight each of them, their foibles and loyalties. But little is actually known about them, where they come from or anything. Once could argue that such information is unnecessary, this is not the type of film to take the time to get to know the protagonists, actually we gain more insight to the Predator that we do anyone else! The squad is a pretty motley crew with stereotypical characterisation; bomb expert, communications expert, brotherly bond between two members, tracker and joker. And yet the unit fits together like a jigsaw puzzle, the scant few scenes providing just enough empathy for the winning side. This is helped amiably by the actors chosen, all for their body size rather than acting ability. Eighties all over. The good natured rivalry between the actors as they buff themselves up before the camera starts to roll comes over on the screen and really helps to gel the team together. Their dialogue it typically macho too, given to comedic effect and again it works well, although Arnie doesn't get any really good one liners “Stick around” just does not have that same ring but he does get the best line of the film; all together now “If it bleeds, we can kill it”.

The alien, however, is another thing altogether, from the stories told and the few scenes it has we gleam it is a hunter in the hottest months, keeps trophies, works totally independently, kills itself rather than be captured, hunts using heat signatures not the visual spectrum and is nearly invisible when shielded. And all this so nearly failed due to a rubbish initial design! If it hadn't have been for Stan Winston's redesign, Predator could have been a laughable B picture. As it was his creation, coupled with the attributes listed above made it an icon whose reputation has only been soured by the latest AvP travesty.

All is not rosy, though, director John McTiernan and cinematographer Donald McAlpine did have a time of it and did extremely well considering; the initial shoot, in Mexico, was in a deciduous forest, during autumn, and no matter how many green leaves you stick in front of a camera the dead and dying forest is always going to show! It is perhaps the lowest point of the film.

No such problems with the action though, a Silver production, even an early one as this, is rife with action sequences. The jungle encampment attack is a visual excess in explosion and bullet. As is the flattening of the jungle in an attempt to kill the alien. And Dutch's stand off against it is something out of 'First Blood'. However all are taken seriously and never without any cheese, there's nary a nod or wink to the camera as Arnie battles his way through the jungle against all the odds. Out gunned and out classes he relies on his wit and cunning (I'm talking about the character here) to even the odds, even if it turns into dumb luck to win the day.

In the end the movie is a film about the predator; just as Terminator made Arnie a star, so this made it for the alien easily overshadowing its human counterpart. As brutal and sadistic as it is, it is the true antithesis of antihero; the one on one at the end makes it really difficult to know who to root for, or is that just me? The film zips along at a brisk pace its superficial plot covering hidden depths. It doesn't make you think but it does give you scope for discussion. Unlike many of the eighties action movies that are firmly rooted in that decade, Predator manages to break the mould and continues to hunt us to this day.