A classic of the genre 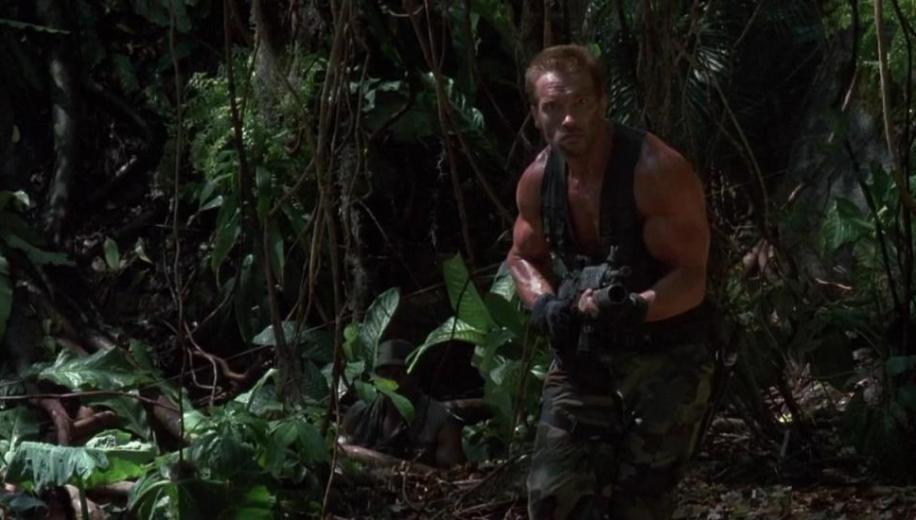 If it bleeds, we can kill it

Arnie’s film output is a bit of a mixed bag. Sure his work with James Cameron has always yielded great results, but outside of that collaboration there isn’t much to write home about, even in his early career. There is one that stands out from the crowd, though, tonight’s feature: Predator. A seminal action film that still stands up today, some 30 plus years later, even with its 80’s cheese. Quite possibly Arnie’s finest hour (or 107 minutes!). Surely there can’t be anyone who doesn’t know the film by now?

Arnie plays Dutch, leader of a Special Forces team, duped into a rescue mission, only to find themselves facing off against an alien predator who wants nothing but their skulls. Such a simple premise brought to life by director John McTiernan who cast his film with huge muscle bound ‘actors’ all of whom wanting to take their size to the next level, which brought about a rivalry and intense competition on set that gives a fervour to the on screen personas. The chemistry between the actors is intense and this coupled with a non-stop action script and an alien design that created an icon (thanks to a hasty character design by effects maestro Stan Winston) the effect is an action film that all want to live up to. It is pure in its unashamed identity and wears its credentials on its sleeve.

Predator is and remains a classic of the genre, and now, thanks to this new release can be viewed in the best possible format. 
Praise the maker! We can finally consign the 2010 Ultimate Hunter Edition Blu-ray, with its waxy, DNR'd horrific image, to the bin where it rightfully belongs

Let me say that again; this image has had no digital tampering; it is grainy and dirty, but retains all the finite detail that was scrubbed from the last Blu-ray release and whose image was subsequently used for all releases since (including the 3D). But no more! What we have here is the image fans have been crying out for, restoring all the detail and grain and the result is awesome.

It is like seeing the film for the very first time; indeed it is probably better than its theatrical release thanks to the WCG and HDR which breathe new life and depth into every frame. Barring the occasional softness that creeps in, a product of the source and has always been there, the detail on show is terrific. Skin texture, clothing weaves, weapons, ammo casings, jungle leaves, mud, water; everything has a decent edge and is crisp.

Colours are like new, the lush greens, the blues of the sky (or Predator weapon fire), the oranges and reds of the explosions (check out the slick gore on the hanging bodies, or the luminosity of the Predator blood). Helped by an all new black level which pushes the frame to unheard of depths, hiding some shadow detail when required (check out Arnie in the mud, or in his final confrontation), and a white level that can be blinding (explosion at the end) or the sunlight dappled through the trees.

Digitally there are no issues; although I should note that there has been some vertical re-framing, meaning that there is slightly more to the top and slightly less to the bottom of this picture than previous releases. The source is grainy and dirty, as ever it was; no doubt it won’t appeal to grain haters, but to purists this is how Predator should always have looked, and to my eye it is amazing! Unfortunately, there has been no upgrade to the sound; it is the same DTS-HD MA 5.1 track that has adorned the film for years, that is not to say it is a slouch, in fact it is terrifically bombastic, but with this lovely scan it would have been great to have had the full immersive surround sound from Atmos. As it is, the effects are well realised from the surround, from the helicopter blades, to jungle noise, from the effects extravaganza in the camp decimation, to the ‘click click’ of the Predator’s language, all fill the room. Bass it deep and strong, adding impact to gun shots and explosions; but never going wayward or over the top. The score is well layered into the mix, and dialogue is clean and clear and never lost in the mayhem. Sadly there are no new extras, but everything from the Hunter Edition is replicated here on the included Blu-ray, which is the same DNRed monster previously available.

UHD
Audio Commentary – With director John McTiernan is technically informative, if a little dry, but contains plenty of information about the troubled shoot as well as on set anicdots.
Text Commentary – A subtitle track by Film Journalist/Historian Eric Lichtenfeld which comprises of interviews with major crew members, such as editor, sound designers/editors, screenwriters, stunt choreographers/2nd unit directors.

Blu-ray
Audio Commentary – As above.
Text Commentary – As above.
Predator: Evolution of a Species: Hunters of Extreme Perfection – 11 minute feature sees producer John Davis and filmmakers Robert Rodriguez and Nimrod Antal discussing the franchises popularity.
If It Bleeds, We Can Kill It: The Making of Predator – Half hour making of feature from 2001, covers pretty much all the bases.
Inside the Predator – A series of 7 featurettes covering various aspects of the films, titled: Inside the Predator, Classified Action, The Unseen Arnold, Old Painless, The Life Inside, Camouflage, Welcome to the Jungle and finally Character Design.
Special Effects – 3 minutes of effects tests.
Short Takes – 4 interviews, titled: John McTiernan on Learning Film, Jesse's Ultimate Goal, Stan Winston: Practical Joker and Don't Drink the Water.
Deleted Scenes and Outtakes – 4 short scenes, titled: Fleeing the Predator, Chameleon, Building a Trap and Sliding Downhill.Theatrical Trailers
Photo Gallery
Predator Profile – Text & photo profile the Predator, his weapons and armour. Outside of his work with James Cameron, Predator is Arnie’s finest hour. Putting together a bunch of no-nonsense musclebound ‘actors’ pitched against one of the most cleverly designed alien antagonists ever and its success was assured. That fact that it is full of 80’s cheese and unashamedly action just further enthuses its fans. It spawned sequels, spin offs and an ongoing franchise, but, as yet, none can compare to the original. Arnie vs Alien – what’s not to love?

As a 4K UHD set the release from Fox is what fans have been waiting for in terms of its picture; a new scan retaining all the grain and thus all the finite detail, boosted by HDR to give vivid colouring, astonishing blacks and pure highlights leaves an image that is stunning; and the only way to see the film. The sound hasn’t been ungraded, neither are there any new extras, both having been ported from previous releases; even so both are decent benchmarks, the sound being all encompassing and the extras covering pretty much all you need to know.