Precious: Based on the Novel 'Push' by Sapphire Movie Review 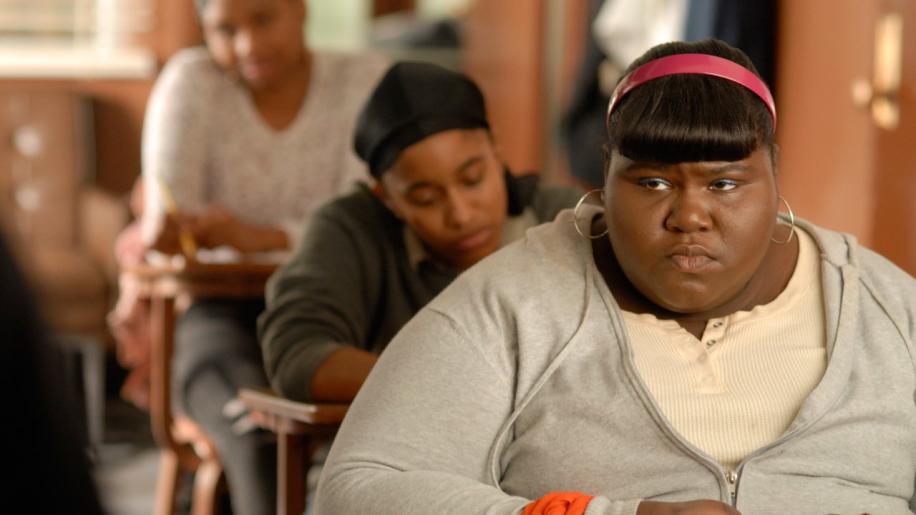 Precious: Based on the Novel 'Push' by Sapphire Movie (2009)

'Precious', or to give it its rather long and laborious full title, 'Precious: Based on the Novel “Push” by Sapphire', was released in 2009 and was directed by Lee Daniels. Many of you may have heard about this movie largely due to the fact that one of its stars (Mo'Nique) picked up a Best Supporting Oscar at this year's ceremony, with the script picking up a Best Screenplay on Material Previously Produced/Published award. In addition, nominations for Best Director, Best Editing, Best Picture and Best Actress, as well as the Sundance Film Festival Grand Jury Award, were also earned by this low budget flick. Gleaning huge critical acclaim over the past couple of months for its stunning central performances, I was excited to finally see a movie that has be on my “to watch” list for some time.

The cast, like the director, are largely unknowns in the world of cinema. Gabourey Sidibe, making her acting debut, takes on the title role, playing Claireece Precious Jones. Mo'Nique, famous for her stint on comedy show “The Parkers”, is an accomplished stand up comedienne, who turned her trade first to television and then to cinema (interesting to note that she was also a phone sex operator and apparently was very convincing!). In this movie she plays Precious's mother, Mary. Paula Patton, who has starred in a couple of low budget productions, plays Precious's teacher, Blu Rain. Styled as an almost art house/MTV type production, some musical superstars also crop up, playing some secondary characters; Mariah Carey plays Ms. Weiss, Precious's councillor, and Lenny Kravitz plays a nurse called John.

Precious is a sixteen year old resident of Harlem, New York City. Illiterate and having enjoyed too much fried chicken over the course of her time on this earth, Precious's family life is reminiscent of the seventh level of hell. She lives in a horrifically dingy flat with her mother, Mary. Suffering sexual abuse at the hands of her father (who is no longer around), Precious is pregnant with his child for the second time. To make matters worse, Precious's own mother despises her daughter with a passion and regularly abuses her (both sexually and physically), hating her own daughter for “stealing” her man away. Living on a diet of “soul food” (namely pig's feet and other fat laden foodstuffs) and receiving absolutely no encouragement to educate herself, Precious is most certainly not living a fairytale existence.

When her headmistress realises that Precious is pregnant again, and with her schooling suffering as a result, she enrols her in an “alternative school”. Although Mary does not want her daughter to attend another school (she sees it as a waste of time, stating that welfare would be more beneficial), Precious attends anyway and makes the first steps towards changing the person she is and escaping the life that she is enslaved to. Her new teacher, Ms. Blu Rain, is skilled in the art of getting inside her pupils' heads and quickly realises that Precious is on the verge of having a serious breakdown. Showing Precious unaccustomed care, compassion and attention, Blu works hard to make sure that she does everything in her power to give this young girl, who has been forced to become a woman and mother well before her time, the best possible opportunities to make her life as normal as possible.


I was distinctly reminded of a novel that was released some time ago by the name of “A Child Named It” (although I am rather sceptical with regard to the authenticity of this “true story”). Both depict harrowing tales of child abuse at the hands of satanic parents. Sapphire, who wrote “Push”, on which this movie is based, stated that the central character is based on a number of women who she worked with during her time as a social worker. As Precious (in the movie) finds her situation transitioning from worse to downright unbearable, I found myself becoming slightly detached from the central character as things just became a little too unbelievable (perhaps this is a factor of my sheltered existence). I'm not disputing the fact that these events occurred but there must be some dramatisation of the facts. I say this simply because I don't believe that one person in modern society could have so much rotten luck (fictional or not). Still though, as a whole, the entire piece works very well indeed. This is largely to due to the almost understated and unassuming manner in which it is presented.

The direction from Lee Daniels is quite accomplished for such a relatively inexperienced helmsman. He manages to keep things tight and claustrophobic during the scenes in Precious's dank abode, which contain minimal colouration. In fact, during these darker scenes, Precious's face is almost completely shrouded in darkness, amplifying the dark nature of her situation. As we move towards the classroom based scenes, we get to meet Precious's new classmates and there's a splash of colour thrown in here and there to mark a happier period in her life. The most noticeable improvement in the tone of the imagery comes by way of Precious's fantasy scenes, in which the young adolescent lives out her dream of becoming a superstar. While Daniel's technique is very sold and gritty for the majority, which really suits the tone of the piece, I found the inclusion of these fantasy scenes a little out of place. I understand that this is his way of showing that Precious is still a young girl with big dreams and ambitions but they sometimes felt a little out of place. I'm not too sure if these scenes were included in the novel, but it's almost as though directors are obliged to include these fantasy segments ala Ally McBeal nowadays. That being said, these respites most definitely hammer home the desperate and horrific nature of Precious's reality, when she leaves her fantastical daydreams. Aside from this minor gripe, my only other complaint regarding Daniels' directing skills would be the use of handheld cameras and quick pans/zooms, which really don't work to achieve the “documentary” effect that he was looking for.

The stellar performance from the entire cast is most certainly worth the price of the admission ticket. Although Mo'Nique received the statue, the prize could have been picked up by any one of the impeccable primary players. I'm not too sure if many of these inexperienced actors were simply playing an exaggerated caricature of their own selves but as a collective they are very, very impressive indeed. Paula Patton, Gabourey Sidibe and Mo'Nique all perform to perfection and really create living breathing characters, with plenty of emotion and feeling. More importantly, they all avoid playing it up for the camera and the very understated and natural way in which they present themselves adds a huge amount of believability to their collective performance. Most surprising of all, however, was the performance from a suitably grubby and down dressed Mariah Carey. For all the diva horror stories that we've heard about Carey over the years, she certainly has set out to prove all here critics wrong here and for my money she totally succeeds. Lenny Kravitz (sans dreadlocks) also turns out a strong supporting turn as the tender Nurse John.

At base level, this movie is a fascinating study into the social interaction of a family unit and how this environment shapes a child's future. Precious has known no other life so from her point of view she is normal. Keeping her home life private and not discussing it with others means that she will never know any different. The fact that she accepts that her own father is her baby's daddy is bad enough, the fact that she calls her daughter “Lil Mongo” (as she has Down's Syndrome), is absolutely socially unacceptable. But yet this is what her mother calls her daughter and so Precious follows suit. Living in isolation with her mother in their rundown apartment, Precious is a slave who looks after her mother, while her own daughter lives with her grandmother. Mary is violent, temperamental and unpredictable and so Precious lives in constant fear and is haunted by both the horrors of her childhood and her present situation. Forced to eat when she doesn't want to and prevented from furthering her education, Precious's jealous mother attempts to keep her daughter fat and stupid by any means necessary. But Precious, by some immense fluke of genetics, is a kind soul, and longs to escape and make a better life for herself.

When she moves to the alternative school, the basic approach to the students education through keeping a journal means that more of Precious's life becomes common knowledge. Although many of her classmates in the “alternative school” have been through addiction and other tough situations, none compare to the horror that Precious is living on a daily basis. From speaking to others, Precious realises that she must change her life or she will be trapped forever. A story of hope and courage in the face of adversity, this is most certainly not a movie for the faint hearted. I came away from 'Precious' feeling much like I did after watching 'The Road'; emotionally drained, not in particularly good humour but left satisfied that I had experienced something different in the world of cinema and that's always a plus in my book. Whilst this is not one to lift the spirits, the central performances, stylish direction, cleverly weighted pace and engrossing (and disturbing) storyline, means that this movie comes recommended (but approach with caution!).