If you can forgive the predictability, there is some enjoyment to be had. 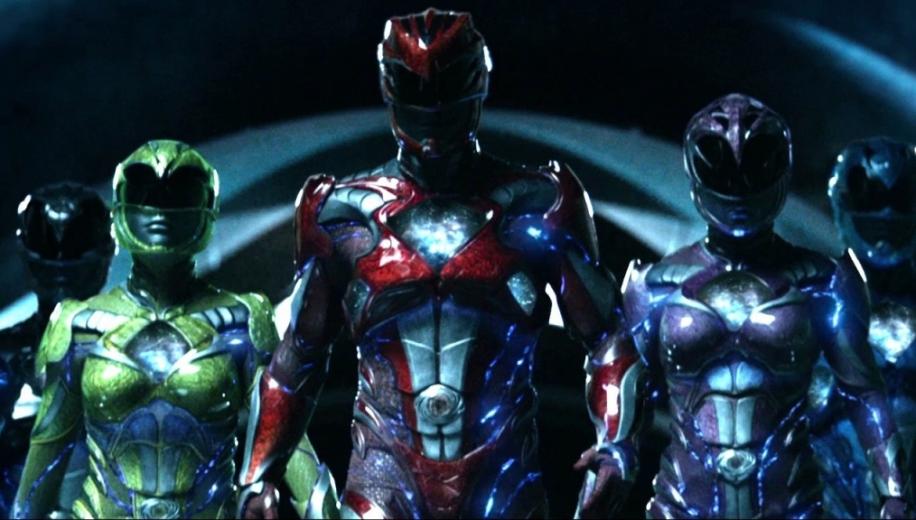 Me and four kids found a spaceship buried underground. I'm pretty sure I'm a superhero.

65 million years ago a pitch battle between the Rangers and the evil Rita ended with the accidental destruction of the dinosaurs as a huge meteor was needed to secure victory - achieved at the cost of the Rangers themselves, a decision made by their leader. But in a last deliberate act he buries the Power Coins, charging them to find worthy recipients to continue the legacy. So when five semi-delinquent teenagers happen to be in the same place at the same time, they are deemed worthy enough to inherit that gift. Cue training montages, arguments, trust building and teamwork, as the Rangers prepare to take on Ultimate Evil – luckily some fishermen happen to pick up said Evil at the same time as the Coins were found, otherwise there would be no-one to fight! Ultimate Evil is, (obviously) Rita, and her desire to remove the Zeo Crystal, the source of all life on Earth, with a Golden monster. So it's up to the combined strength of the Rangers to save the day; if only they knew how.
There is absolutely no new ground broken with this Power Rangers reboot, based on the incredibly popular 90s TV show. It takes every trope used in any super-hero origin story, as well as every team coming together story, and teenage angst story, then melds them into one huge unwieldy beast with plenty of flashy visuals, thumping score, action, quips and feel-good conclusion. The film is a little bit all over the place, bouncing around in terms of tone and relying more on contrivance and convenience than actual plot devices to get from one scene to the next. Having said all that, the film skilfully avoids any and all ‘Michael Bay schlock’, has a group of likable leads, a furious pace, and remains curiously watchable throughout. It's difficult to work out the audience though; it’s too far apart from the original to be faithful for fans, but relies on prior knowledge so alienating a new audience. But if you can forgive the predictability of it all, there is some enjoyment to be had. Power Rangers was filmed digitally using Red Epic Dragon cameras, with a resolutions of 6, 5 and 4K, and was finished using a 4K Digital Intermediate (DI), which forms the basis for this Ultra HD Blu-ray release. The disc presents a 3840 x 2160p resolution in a widescreen 2.39:1 aspect ratio, uses 10-bit video depth, a Wider Colour Gamut (WCG) and High Dynamic Range (HDR), as well as Dolby Vision, and is encoded using the HEVC (H.265) codec.


As you might expect for a 4K source the image is pristine; take, for example, the opening battle scene with Red Ranger crawling through sand and ash – see how crisp and fine the individual grains are, how the Ranger armour is intricately assembled, how the fire and smoke billow around, the mountainous skyline against the troubled sky. Once the Ranger removes his armour, see how fine the alien skin texture is. And this detailing is consummate throughout the rest of the film; the rock sculptures in the cave, or overlooking the gold mine; Angel Grove’s cityscape, the tree lines, clothing weaves, brick facia or room decoration.

Once you take into consideration the WCG and HDR the image really comes alive; the depth of colour to the Ranger’s armour, how it shimmers, how bright daylight is, how dark the caverns are, how deep the blues are underwater, the silver of fish scales, the orange of flames. Black levels are quite excellent, hiding plenty of shadow detail, while highlights are clean and bright without any clipping. It is a visual tour de force. The source is also immaculate, while there are no digital issues to contend with.

Whilst the HDR10 version of the film is spectacular, the Dolby Vision version manages to top it with an image that is subtly better. There is just a bit more detail in the brighter scenes, greater depth in some of the darker scenes and more refined colours and highlights. The difference between the two versions of HDR isn't night and day but the Dolby Vision version is the superior experience. The Dolby Atmos soundtrack is a surround extravaganza; taking the opening scene, again, Red Ranger is crawling towards the camera while overhead explosions reign down, missiles and fire fly back, front and all around, while the dialogue remains front and centre. The mix offers surround excellence – such as when Jason escapes after planting the bull – the 360 camera sweep and the sound follows around, and when the car crashes you are inside the carnage. And, again, this sound replication is throughout the film; reverb in the caverns, school corridor chatter, underground spaceship humming. Dialogue is clear and precise, sounds very natural and is given plenty of directionality when required. Effects, as already stated, come from all around, whether that is a full pitch battle, or open space standing above a gorge. Bass is powerful, tight and subterranean in places. The score makes full use of the surround environment, including bass channels, while LF effects are aplenty. The overhead layer is used to great effect in both the action heavy scenes or more subtly in scenes such as those underwater, which really immerse you in the surround field. Lionsgate have ported over all the extras from the (included) Blu-ray onto the 4K UHD disc, nice!

Audio Commentary – With director Dean Israelite and writer John Gatins, whose fairly mundane chat covers all the topics you would expect, just with less enthusiasm, meaning it becomes somewhat of a chore.
The Power of the Present – Is a nine part feature (titles are: Rangers Then to Now, Building the Team, Beyond the Rangers, Suiting Up, Rangers, Welcome to Training, Ranger in the Wild, It's Morphin' Time, Power Balled: Music and Sound and This Is Your Destiny) whose combined run time tops two hours twenty minutes and is a very comprehensive look at all aspects of the production.
Deleted/Extended/Alternate Scenes – Totalling 18 scenes for a combined runtime of 35 minutes.
Outtakes – Four minutes of goofing off and mistakes.
Theatrical Trailer – With director’s commentary. Power Rangers is a reboot of the phenomenally successful 90’s TV show, that someone felt was ripe for the picking. It is a typical origin story, with every trope you would expect; it breaks no new ground, is comical while trying to remain serious and has very little to offer outside of spectacle. Having said that it studiously avoids any ‘Michael Bay schlock’ and despite being beyond predictable, actually remains a reasonable watch.


Lionsgate's 4K UHD Blu-ray release is the first double Dolby disc with both Vision and Atmos and overall it's a pretty good package. The picture, from a 4K source, is stunning in terms of detail, colour reproduction, black levels and dynamic range – with the Dolby Vision edging out the HDR10 image as the superior experience. The Dolby Atmos surround track is another triumph for the format, being an effects extravaganza using every layer and some hugely impressive bass sequences. The extras have been ported over to the UHD disc, which makes a nice change, and are plentiful and informative.