Set sail across the seven seas... 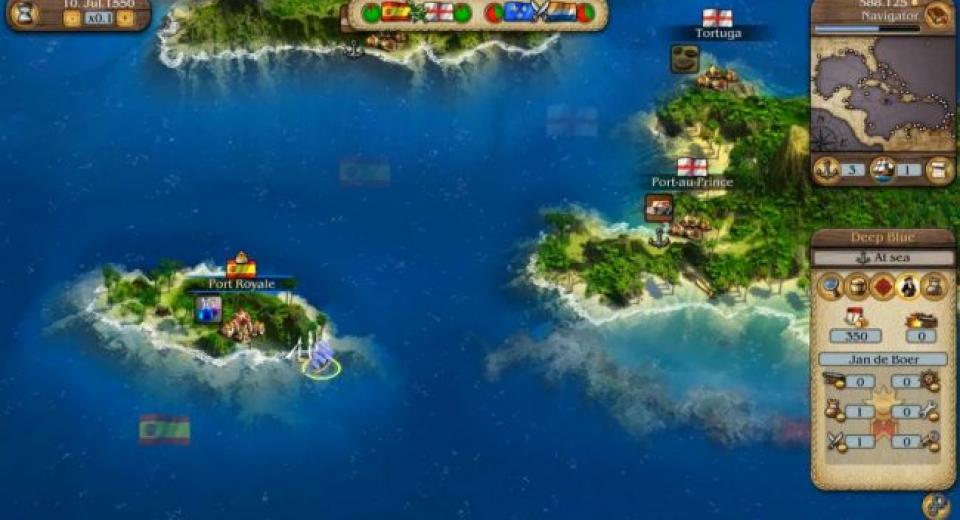 We’ve seen a steady stream of civilisation and strategy games come to consoles over the past couple of years, all of which have seen differing degrees of success. Most of them fall foul of fiddly controls as they don’t translate well onto the controllers leaving the keyboard and mouse at the top of the class for this particular genre. However, if done right, then there is a lucrative market for developers to plunder as long as they provide an entertaining package.

Many developers make a name for themselves with the PC crowd then take a brave step into the world of console development and suiting the game to a controller-based system. One such company was Ascaron Entertainment who created the Port Royale series on PC before sadly falling foul to insolvency.

Kalypso Media picked up many of the failing company’s assets including the above series and have now passed the baton of developing duties to Gaming Minds who have worked on two games previously. The first being Darkstar One: Broken Alliance for the 360, a space simulator, and Patrician on the PC, an economic simulator, so they have a decent grounding in the genre. There will be some doubt surrounding the company as to whether or not they can supply this latest Port Royale title, Pirates & Adventurers, with some new features whilst sticking closely to the source material.

As mentioned in the introduction, Port Royale 3 is a civilisation/strategy game set in a fictional 17th century Caribbean that offers up two campaigns both boasting interesting ways for you to play. Players can either take up the life of a trader and flit between the local towns and cities in order to earn huge piles of gold, or they can get the wind fully in their sails and head out to sea and take on the pirate menace. But more of that later on, let’s look at the game as a whole first. After a painful mandatory install you can set sail and begin your adventure; a quick introduction into your desired path and you’re ready. The story and background detail is shown to you by oil pictures of key events replicating artwork of the time. I’m a sucker for sequences like this but sadly they seem wasted here as there is very little story to explain/showcase in Port Royale 3. You could skip them and you would be neither at an advantage or disadvantage which is quite sad as you should care about what is going on around you.

As far as the graphics are concerned they aren’t actually that bad and are of a similar level to that which we have come to expect from civilisation games on consoles. The closer you zoom into the world the environments look a little rough around the edges but you’ll spend most of your time panned out and managing multiple things at once.

Controlling the camera and maintaining a good viewing angle is one major bug bear for these types of games but here there seems to be no such trouble. Things can get a little frantic on screen every now and again but not so much so that you ever feel like you’re being swamped or having to work double time because of the camera.

One thing’s for sure, things will never become hectic during the trading campaign. Whilst this section of the game isn’t lacklustre per se it just basically boils down to flitting between a selection of towns and cities to trade goods you bought elsewhere to make a tidy profit. Whilst its nature may be quite simple there is an element of strategy to it all as if you don’t hurry your purchases and buy smart you can easily end up losing a heap of gold. If you bring a town some goods they’re low on then their affinity for you grows whilst draining them of stock will mean they will take a sudden dislike to you. Building a good reputation with towns will result in better trades in the future and allow you to make more money as a result. Watching the stock of each town and exploiting their needs is key to being successful here as selling your stock for less than you paid gets you nowhere.

If there was one thing you needed to take from this review then it is that this game takes time to get going and you absolutely must absorb all the information given to you throughout the extensive tutorials. Rushing in head-first gets you nowhere and will result in many restarts and re-treading of ground. The tutorials in place are an excellent way to familiarise yourself with the world and mechanics but they are long. Very long.

The adventurer side of things sees you rise to power and fame through taking over towns and also destroying any enemy fleets you come across on the high seas. Obviously this section is filled with more action and in that respect comes across as more entertaining but it depends entirely on how you get your kicks. There is a similar element of strategy to this as well given that you need to decide when to expand your fleet, hold back or attack and go out and who to build your reputation with around the Caribbean. The world map will be where you spend most of your time whichever way you decide to play and this is reminiscent of Sid Meier’s string of games in appearance. Here you can go explore uncharted territory, send ships to trade or attack or simply watch ships come and go as you sit back and contemplate your next move. This is where you see what individual civilisations require for trading and all of this can be done on this screen without having to enter each one individually.

This works rather well and allows you to avoid the sluggish loading times when popping in and out of each town. Other functions such as adding to your fleet or splitting your ships into smaller groups must be done within the town but thankfully this doesn’t take too long.

Being overly critical, you would say that Port Royale 3 takes too long to get going and some of its elements are not very entertaining. However, if you look at the massive gap in the console market for trading and civilisation simulators then you realise that this is the sort of game people have been waiting for on consoles. Granted it’s not the prettiest and most exciting game out there but if you take your time with it and learn how everything works and links together then you could lose yourself in it for hours at a time. Just don’t go expecting to charge around with your flintlock pistols blazing and shooting everything up…

Port Royale proves that there is a market out there for simulator games provided they get the basics right. In comparison to titles before it, Pirates & Merchants may not be the best example of the genre around but it takes a different approach by offering two opposing campaigns. It does, however, look the part but sadly it will be missed by many gamers out there when it thoroughly deserves a playthrough.