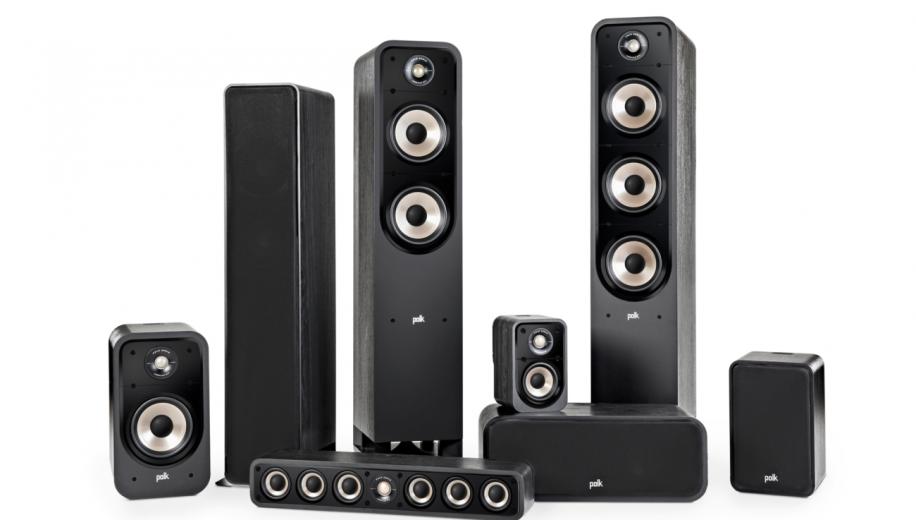 What is the Polk Audio Signature E Series?

The Polk Audio Signature E Series is an updated mid-range line-up that sits between the entry-level T Series and the higher-end RTiA Series. There’s plenty of choice within the range, including floorstanding, bookshelf and dedicated centre speakers. Polk hasn’t added a dedicated surround speaker or upward-firing module to the line-up because, with the exception of the centre models, these speakers are designed to work in both Hi-Fi and home cinema systems.

However, those looking to build a good multichannel system have some great models to choose from, including three floorstanding tower speakers in the shape of the S60e, S55e and S50e; two centre speakers in the form of the S35e and S30e; and three bookshelf speakers with the S20e, S15e and S10e. All the speakers in this range use the same high-resolution Terylene tweeter and proprietary Power Port technology, making the only difference the size of the midbass drivers.

The Polk Audio S50e is the smallest floorstander in the Signature E Series but, like the majority of the speakers in the range, it uses 5.25-inch midbass drivers with mica-reinforced Polypropylene cones. In the case of the S50e, there are two midbass drivers and a 1-inch Terylene tweeter in a fairly typical layout, and it looks surprisingly normal for a speaker manufactured by Polk.


... the build quality is excellent, with curved edges and gilded accents around the drivers

The speaker uses magnetic anti-diffraction fabric grilles, and there are gold-plated five-way binding posts at the rear, with the option for bi-wiring and bi-amping. The S50e sits on large supportive feet, and the build quality is excellent, with curved edges and gilded accents around the drivers. There’s a choice of Black Washed Walnut or Winter White finishes.

The Polk Audio S35e is a dedicated centre speaker and, in terms of its look, it’s much more how you would imagine a speaker designed by this particular company. The S35e uses six 3-inch midbass drivers with mica-reinforced Polypropylene cones and the same 1-inch Terylene tweeter as the S50e.

The reason for all the drivers is to allow for a slimmer cabinet that fits into spaces under a TV, but the trade-off is it uses different midbass drivers to the rest of the system, which might affect the tonal balance. If you think that might be an issue, Polk also makes the larger S30e, which does use the same 5.25-inch drivers.

As with the S50e, the S35e uses the Dynamic Balance driver design, and a rearwards-firing vented bass ports. There are the same magnetic anti-diffraction fabric grilles and gold-plated five-way binding posts at the rear. The build quality is also excellent, and there’s a choice of Black Washed Walnut or Winter White finishes.

The S35e has a claimed sensitivity of 89dB and a claimed frequency response of 70Hz-40kHz. It measures 620 x 105 x 155mm (WxHxD), and weighs in at 6.4kg. The low-end extension of this speaker has been sacrificed in favour of a height of just 105mm, which should make installation easier.


The reason for all the drivers is to allow for a slimmer cabinet that fits into spaces under a TV, but the trade-off is it uses different midbass drivers to the rest of the system

The Polk Audio S15e is a standmount speaker, and has the same 5.25-inch midbass driver with mica-reinforced Polypropylene cone, and 1-inch Terylene tweeter as the S50e. It also has the Dynamic Balance driver design, and a rearwards-firing vented bass port.

At the front are the same magnetic anti-diffraction fabric grilles, and at the rear you’ll find gold-plated five-way binding posts. The build quality remains impressive, and there’s the same choice of Black Washed Walnut or Winter White finishes.


... it looks surprisingly normal for a speaker manufactured by Polk

The Polk Audio HTS 12 is the larger of the company’s current subwoofers, and is designed to complement the Signature E range. It has a matching curved cabinet and the same Black Washed Walnut or Winter White finishes. There’s a 12-inch front-firing long-throw Polypropylene driver, which is vented at the bottom with a downward-firing port that also includes Power Port technology. There’s a claimed frequency response of 22-180Hz.

The sub boasts Class D amplification that can deliver 200W of continuous power, with 400W peaks. At the rear is a basic set of controls with volume, low-pass frequency settings, and a 0-180˚ phase switch. In terms of the connections, there's a choice of stereo line level and mono LFE inputs (both RCA), along with a 12V trigger and an auto-standby feature. The HTS 12 measures 435 x 470 x 460mm (WxHxD) and weighs 22.6kg.

How was the system tested?

The Polk Audio Signature E Series 5.1-channel speaker system was tested in a dedicated home cinema. The S50e floorstanders were positioned at the front of the room on either side of the projector screen, the S35e centre speaker between them, and the S15e standmount speakers were located at the sides and just behind the main listening position. The HTS 12 subwoofer was placed at the front and to the left of the centre speaker, away from the wall, and firing forwards.

Testing used a mixture of material ranging from Blu-ray and Ultra HD Blu-rays, CDs, DVD-Audio discs, SACDs and music streaming services. The primary source was the Oppo UDP-203 4K Blu-ray player, and amplification was provided by the reference Arcam AVR850 AV receiver in a 5.1-channel configuration.

I started the test with the Elton John biopic Rocketman, and it would seem the Polk Signature E’s signature quality is an exciting delivery, so I guess that’s what the E stands for. The two floorstanders produce a solid front soundstage that perfectly captures Elton’s breakthrough gig at The Troubadour with a driving intensity. They are capable of a decent bass performance on their own, but the subwoofer adds some well-timed low-end impact to the drums.

Keeping the musical theme going, I then popped on Bohemian Rhapsody and watched Queen’s triumphant Live Aid set at the climax of the film. The system does a great job of building a big enough soundstage to make you think you’re in the crowd at Wembley. As Freddie breaks into the anthemic We Will Rock You, the sound of 70,000 people stamping and clapping in unison creates a sonic wave that crashes over you.


Polk Signature E’s signature quality is an exciting delivery, so I guess that’s what the E stands for


This system is hugely enjoyable, with an ability to handle plenty of power, tight transients and a wide dynamic range. You can drive these speakers hard, but they also perform well at lower volumes which is probably more realistic. They’re also surprisingly sensitive, with an impressive ability to retrieve the smallest details from a soundtrack. As a result, these speakers not only sound great with music but are also able to build a cohesive and balanced surround system.

What better way to test the Polk’s multichannel capabilities than with one of the first films to have stereo surrounds – Apocalypse Now. The film’s soundtrack remains a masterclass in sound design, with Martin Sheen’s voice over clear and precise throughout. The sounds of the jungle surround you with noises, and the sub gets to strut its stuff during the ‘rolling thunder’ scene, as a B52 strike rumbles off-camera.


You can drive these speakers hard, but they also perform well at lower volumes which is probably more realistic

However, it’s the film’s famous ‘Ride of the Valkyrie’ sequence that remains the stand-out acoustic moment, with a sonic assault that perfectly complements the helicopter attack on the Vietnamese village. The music builds to a crescendo as a barrage of missiles and heavy machine-gun fire rip through the soundstage. Explosions hit with a percussive thump, radio chatter fills the airwaves, and helicopters swarm around your head with a seamless precision.

The Signature E’s sense of scale is perfectly displayed in Godzilla: King of the Monsters, as the titular beast slugs it out with all the other titanic kaiju. This is a huge soundtrack that takes no prisoners, and while the system does a great job of giving the sonic fisticuffs an epic sense of size, it also reveals certain limitations. There are plenty of effects emanating from all the channels, but the S35e with its smaller drivers sometimes struggles to handle the depth of Godzilla’s roar.


You might find that the larger S30e centre speaker with its larger driver makes a better match for the other speakers, and better handles the lower frequencies being used in the centre channel. The soundtrack’s reliance on massive bass pushes the system to its limits. The entire soundstage is frequently energised with effects emanating from every channel – from the sound of a collapsing building to massive volcanic explosions, and the roar of jet fighters banking through the room.


... it’s also the weak link in this system, and there are better alternatives available for a similar price

The soundtrack often digs really deep at the lower end of the frequency range, and it’s here that the subwoofer in particulate starts to struggle. Godzilla’s room-shaking footsteps are handled reasonably well, but the HTS 12 begins to run out of steam as the bass dips below 20Hz. It’s a perfectly decent subwoofer, but it’s also the weak link in this system, and there are better alternatives available for a similar price.

The Polk Audio Signature E Series is a cracking range of speakers that will work just as well whether they're part of a Hi-Fi or home cinema setup. The system itself looks charming, offers excellent value and delivers an undeniably enjoyable sonic performance.

The speakers are dynamic and responsive, quickly reacting to transients, while remaining very easy to drive. As a result, they retain plenty of detail and clarity, even at lower volumes. Thanks to the inclusion of bass ports, they are also capable of more low-end impact than you might imagine.

The only real weak link is HTS 12 subwoofer, which doesn’t go deep enough to fully support the rest of the system. However, if you pair these speakers with the BK Electronics P12-300SB-PR, you’d have a superb budget to midrange setup that would deliver a fantastic multichannel performance.

At this end of the market, you're spoilt for choice, but the first obvious alternative is the Q Acoustics 3000i Series. The company has been producing award-winning speaker packages for years, somehow managing to routinely pull off the difficult trick of launching ranges that sound fantastic and don't break the bank. The 3000i Series benefits from innovations trickled down from the company's reference Concept 500 speaker, and the result is an open but detailed performance. This attractively designed and beautifully made speaker package also only costs £1,350, making it a definite best buy.

If you're looking for something with real class that sits just above the Polk Audio Signature E Series in terms of price, then take a look at the Bowers & Wilkins 600 Series. These gorgeous speakers boast the company's usual attractive cabinets and superior build quality, but also sport its new Continuum driver. The result is a transparent and hugely entertaining performance from these well-designed speakers, and a system that's cohesive and tonally balanced. There's also deep bass and a dynamic delivery, making this a refined multichannel system that comes highly recommended.