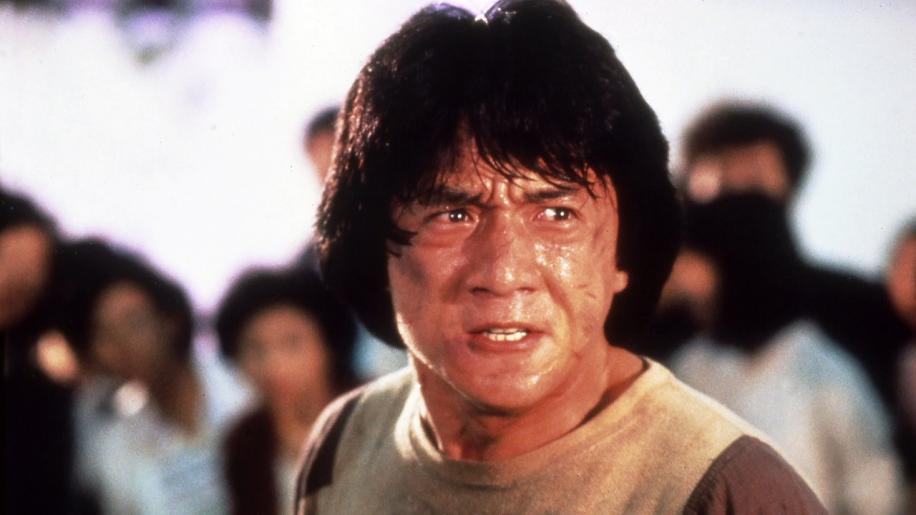 For me, the Jackie Chan experience kicked off with Police Story. After seeing him in action in this movie - on a poorly dubbed VHS title I picked up in Bruges - I was hooked. Sure, Bruce Lee had been The Master for me when it came to martial arts, but Chan soon showed that not only was he capable of lightning-fast moves, but also unbelievable stunt-work. This guy really took his life into his own hands when performing his own breathtaking stunts, inspired more by Buster Keaton than Bruce Lee, and consequently the results were slightly more comedic. His success in Hong Kong was unparalleled and whilst he never quite managed to crack the US market (having to do more overtly comedy-focussed work) he continued to churn out action-adventure epics with astounding stunt set-pieces. Of course, as a consequence of doing all of his own stunts, he often ended up busted up and broken - famously stating that there is almost no part of his body where he has not broken a bone. One of his many notorious massive stunts involved jumping from a bridge onto a hovercraft, and resulted in him breaking his foot. Did that stop him? No, he just painted the plaster the colours of the shoe on his other foot and then went and did the jump again. Insane. Hollywood always had more limitations for Chan than Hong Kong, which left his early work as always showcasing the most amazing stunts, and Police Story was a prime example of this.


Inspector Ka Kui Chan is in the middle of a massive drugs bust on a crime lord and his armed men. When the special police units get spotted, the criminals make a run for it, and Chan chases them, first by car - driving through a shanty town - and then on foot, running after their double-decker bus and hanging from it by an umbrella. Single-handedly apprehending the boss and his minions, Chan praised by his superiors and used as a poster-boy, being given the prestigious duty of body-guarding the only witness they have in the case against the crime boss. Initially his own girlfriend is unimpressed by the detail, but things take a darker turn when assassination attempts are made on the lady, and Chan himself is framed for a murder, forcing him to go on the run and use every move in his repertoire to dish out some serious justice to these criminals.


Police Story is a fairly cheesy, low budget affair, attempting a rather strange mix of straight police thriller, martial arts actioner and slapstick comedy vehicle, which - at times - does not work at all. Are we supposed to note the tension or the hilarity when one of the policemen at the start wets himself in the middle of a gunfight? Everybody seems to be taking it so seriously, it seems impolite to laugh, but how on earth can it be taken seriously? How can Chan's ridiculously tiny service revolver be taken seriously either? Even if he loads it with magnum shells, the thing really doesn't look very intimidating when he's facing off against criminals armed with 45s. Or Chan's massive hair for that matter, but that's another story.


Basically, Police Story was a first attempt at creating a decent and popular police-themed vehicle for Jackie Chan's amazing stunts and breathtakingly fast martial arts antics. The Armour of God films offered Chan's take on Indiana Jones - complete with martial arts and stunts mayhem - and Police Story was his attempt to get in on Dirty Harry, only with his trademark fun thrown into the mix. And whilst you certainly can't take it seriously - even if most of the cast are - you can enjoy it for what it is: fun, silly and a good excuse to string together some superb examples of this master in his prime.


Where it really works is when Chan is taking on a half a dozen criminals in the middle of the street, kicking them through car windscreens, swinging through the car windows in a perfectly choreographed fashion, and with unbelievable, lightning-fast reflexes. Did that car almost hit him? What if he had slipped and mistimed the jump? The amazing antics of this insane and frantic little man are something which never quite survived the transition to Hollywood - and you can see here exactly why. Who on earth would insure Chan to do a stunt that involved jumping up between two cars that are about to crash into one another? The split-second timing involved does not allow for any mistakes - had he messed up, he would have surely had both legs crushed between the two cars, so why would the insurers cover that? No way, Chan's way too crazy for Hollywood. And Police Story was only the start of things.


And the downside to not being a Hollywood film is that the Hong Kong humour on offer really isn't to everybody's tastes - and certainly was not to mine. The idiotic sequence where Chan gets one of his police buddies to fake an attack against the woman he is trying to protect is painful to watch. The music does not help either, an annoying, twangy, irritating variation on the main theme, designed to telegraph the fact that this scene is not to be taken seriously. Which is all good and well, but how can we tell the difference between this and the 'serious' moments? After all, that is a REALLY big knife that the guy is slashing at the girl with, and if he's faking it, he's taking some pretty big risks with her life (the insurance guy is tut-tutting in the background).


Police Story 2 was to develop on the concept, and showcased even more insane stunts - and arguably the best fight scene I have ever seen Jackie Chan do. Unfortunately they did not jettison the jar-jar binks factor, and it was not until the fun but vapid Police Story 3 that we finally managed to get away from the majority of the really stupid scenes and characters. Still, credit should be given to this, the first instalment in the popular franchise (which eventually tried to tap Hollywood - unsuccessfully - with First Strike, before returning to Hong Kong for the hard-edged and totally serious New Police Story just a few years ago) for starting it all off, and also to Jackie Chan, who not only starred in it and engaged in all those crazy stunts (for which he suffered concussion, third degree burns and no doubt a few broken bones) but also directed the whole damn thing. Impressive. Don't try these stunts at home boys and girls.