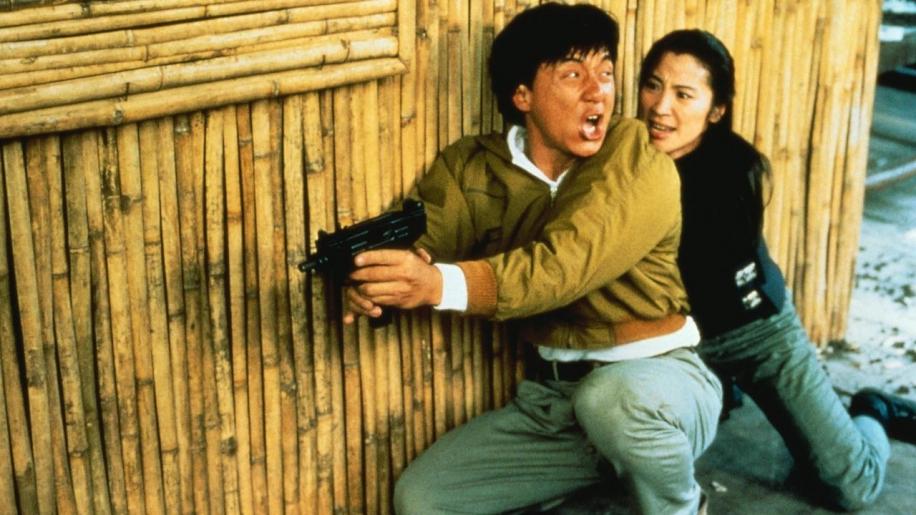 A couple of months ago I was asked by a reader whom I would regard as a decent modern action heroine and, despite wracking my mind, I could only come up with a few contenders – most of them of the ‘normal woman in exceptional circumstances’ variety, like Sigourney Weaver’s Ripley from Alien, or Linda Hamilton’s Sarah Connor from Terminator 2. There aren’t that many examples of female martial arts experts out there in Hollywood, so I largely omitted them from the list, but I totally forgot about Michelle Yeoh. Most will remember her for her distinctly average turn in the Brosnan Bond film Tomorrow Never Dies, where her skills were woefully underused and – at one point – even mocked. I consider Crouching Tiger, Hidden Dragon to be one of her best films, although the surreal (almost super-natural) moves exhibited there largely rule it out as being a prime example of real-world fighting skills. Almost two decades ago Yeoh teamed up with Jackie Chan for the third of the five Police Story films Chan made (Police Story I, Police Story II, Police Story III: Supercop, First Strike, and New Police Story). It’s possibly one of the least well-known of the series, perhaps for good reasons, but as I worked my way through reviewing this particular Chan franchise – in order – I soon discovered that one of the best things about the third entry was the presence of Michelle Yeoh’s ass-kicking companion. Based on the evidence in this film alone, she warrants a place in the top female action heroines category.

With top Police and Intelligence officials concerned about a recent influx of drugs from mainland China into Hong Kong, it becomes vital to find a ‘supercop’ who can infiltrate the cartel and help take it down once and for all. To this end we find Jackie Chan’s Ka-Kui recommended for the job and, before you know it, dispatched to mainland China where he is partnered up with China’s top Interpol operative, Michelle Yeoh’s Jessica Yang. Put undercover in prison to help one of the drug cartel’s best smugglers break out and thus, by gaining his trust, get closer to the drug lord in charge of the operation, Ka-Kui soon finds his life in jeopardy, bumping into his girlfriend May (Maggie Cheung), who happens to be holidaying in Thailand and could potentially blow his cover. Will Ka-Kui and Yang be able to team-up and take down the bad guys, or will they be caught and executed by the cold-hearted drugs lords?

Although the ending is something of a foregone conclusion – considering that this is one of a series of films based on the same character played by Jackie Chan – Police Story III comes across as potentially the most violent of the series (ok, so New Police Story is arguably considerably darker) and, given that Maggie Cheung and Michelle Yeoh don’t return in any of the subsequent instalments, you never know who might take a few rounds from the multiple machine guns that pop up throughout. Dubbed Super Cop, this second sequel has the least humour (again, apart from the fifth entry) of the series, and actually plays out more like a couple of episodes from 24 for the most part of the story – charting Chan’s sequestering and dispatch to infiltrate the gang, his placement in prison, escape, and subsequent working within the cartel, before he finally reaches the head honcho. Now, when I reviewed the last couple of Police Story movies, I noted that the more silly characters and off-beat humour did not do the films justice. But, in revisiting Police Story 3, I actually miss some of these silly antics (perhaps not all of them!). It’s actually is quite disappointing really, and mainly because nobody comes to the Police Story films expecting a stodgy police drama – you expect crazy stunts, goofy physical comedy and martial arts action (it is a Jackie Chan film after all!). So when Police Story 3 takes its dry, often humourless, uneventful globe-trotting path, we are left unsatisfied. The trademark elements, whilst present, merely come in fits and bursts, with only the final, abrupt fifteen minute conclusion coming across as a standout expose of trademark Chan stunts and martial arts.

But, as I’ve stated, there are classic Police Story moments peppered throughout, and fans will still get much pleasure from these. Chan gets to show off his skills in a ‘friendly’ demonstration with one of mainland China’s top police martial arts experts (no, not Yeoh’s Agent); his Police Boss “Uncle” Wong (series regular Bill Tung) puts in a silly, but moderately amusing, Mrs. Doubtfire-esque turn to help maintain Ka-Kui’s cover; Ka-Kui’s much put-upon girlfriend, May, gets thrown around – in the line of duty – once again; and Michelle Yeoh’s cop partner actually gets to do a few standout stunts herself (including a nice nod to the original, where she dangles from the roof of a truck in much the same way as Chan did from a bus in the first movie). Actually, Michelle Yeoh is one of the biggest reasons to watch this movie – she not only gets to do some decent stuntwork, but she actually, arguably, has even more martial arts action. And she’s properly convincing at kicking people’s asses. Unlike many ‘fake’ modern action heroines, when one of her kicks lashes out and connects with a target, it actually looks like it could put someone down.

Often cited as an example of one of Jackie Chan’s best, most professional films, during the prime of his career (it was the first of his films to use on-set sync-sound, rather than ADR), Chan himself largely dismisses the work because he was not entirely happy with the production. It marked his first collaboration with Director Stanley Tong (who would go on to Direct First Strike, the fourth instalment, as well as Rumble in the Bronx, one of Chan’s best early US era productions) and Tong had complete control on the set, drafting in then-retired action star Michelle Yeoh to partner up with him, much to Chan’s dismay (he was quite old-fashioned in that respect, and didn’t really like the idea of the female stars doing any action). Allegedly Chan was pretty grumpy for most of his time on set, being knocked unconscious by a helicopter (check out the outtakes!) and largely being usurped in terms of action and stunts by Yeoh, as brought to the forefront by the Director.

I would argue that Police Story 3: Supercop is actually a little bit thin on the martial arts action and stunts part (especially when it comes to Chan himself). The best bits really do come in the last quarter of an hour and, not least because this is the longer Hong Kong cut, it’s quite a long, at times laborious wait to get to them. Still, it can’t be denied that those fifteen minutes are probably worth the purchase price alone, with a helicopter scene that simply has to be seen to be believed (seriously, it’s the kind of thing that you couldn’t do without CG these days – no insurance company would sign off on it) and a great end credits outtakes sequence that throws some light on just how dangerous these scenes were to the cast and stunt crew involved. Even I didn’t think Michelle Yeoh actually jumped a motorcycle onto a moving train but – you know what – it happened!

Although all of the Police Story series have their own advantages and disadvantages (the first one has some of the best stunts, but the lowest budget; the second has a bigger budget and some of the best fight scenes, but some really goofy supporting characters; the fourth has the most ‘Western’ feel, going for a James Bond-esque international vibe, but is pretty incoherent at times and seems limited on the stunts/action front; and the recent fifth entry is the darkest film, still maintaining some exceptional stunt and action scenes, but doesn’t have a jot of humour in Chan’s lead character), Police Story 3 sits somewhere in the middle of them all – offering not enough action or humour in comparison with most of the rest, and focussing more on its fairly standard undercover cop thriller story than on the elements which make the Police Story series so great. Still, it’s worth watching, but mostly for Michelle Yeoh’s kick-ass contribution, and for the amazing finale.