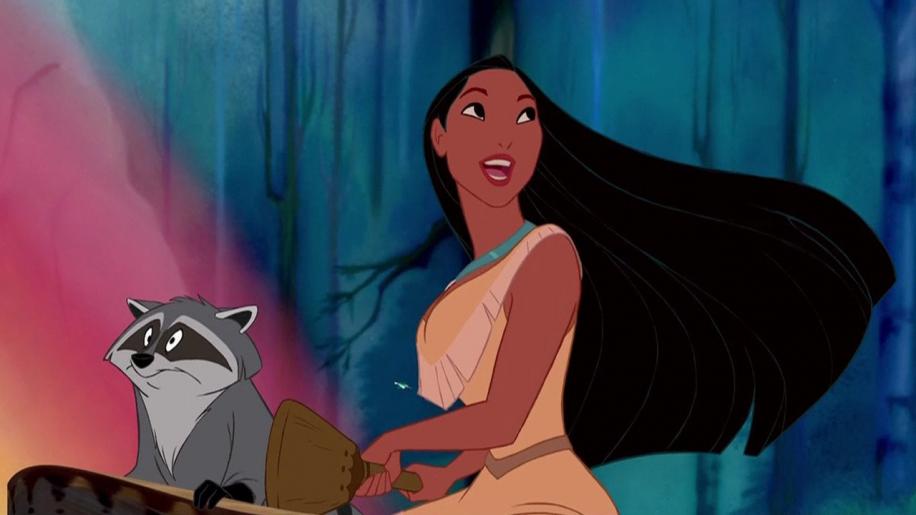 The Disney film. One synonymous with a heart warming story watched by adults and adored by children, timeless films enjoyed generation after generation. Films inspired by imagination for the imagination, and several of their prolific output can seriously be titled Classics. Then there is Pocahontas. To date the only Disney film inspired by real life characters and one that was a new direction for the family company and one from which they have not fully recovered.

Pocahontas is the daughter of an Chief Indian, her name means Little Mischief and she is just that, at one with nature but full of life. When English settlers land on their shores, lead by Ratcliffe, with the sole intent of finding gold, there is the threat of two worlds colliding. Following her heart, from a dream about a spinning arrow, Pocahontas spies on the Captain of the vessel John Smith, they meet and strike up a bond of friendship that turns to something more. However their love cannot dissuade the two radically different cultures clashing, as the 'civilised' English are hell bent on taking on the Indian 'savages' in the pursuit of gold.

This is quite a radical departure for Disney, to attempt to take on racial bigotry and the extermination of the native Indians by settles yet keep within the confines of their remit, a family entertainment picture. In order to do this several liberties, or 'dramatic licence' was used to gloss over the historical facts, though little is actually known, Disney opted for the more common folk lore. Even still, the story is strong stuff, and tackled quite seriously by all involved, so to keep the family aspect, comedic characters are invoked, in the guise of a humming bird, a raccoon and a small dog. To my mind these moments pull from the story and as such jar with ones perception, looking forced into the plot (which they are). Perhaps an out and out comedy or a serious film should have been the focus rather than melding the two; a perception that seems to be common place amongst critics and fans alike.

Once thing Disney did get right was the music. The score is quite embracing and such is the number of songs that I felt this would have been better suited as an opera. Sure the songs aren't as memorable as in other films, but each tells a story and furthers ones understanding of the characters or plot (hence my opera viewpoint). The haunting Colours of the Wind and the climatic Savages really pull out all the stops with visuals and sound that make for spectacular viewing. It is during these two songs that the animators really let loose with their imagination becoming almost Fantasia in their illusion. Animation too is quite spectacular, almost to the point of real life for the leads, and caricatures for the villain. The characters of the film are black and white in their simplicity, to the point of stereo-typicality. Ratcliffe as the main villain has one dimension, namely greed; John Smith has some growth moving from sea Captain employed for protection against 'savages'; and Pocahontas dimension is that of compassion.

In this 10th Anniversary edition there is restored one song that was removed from the theatrical run due to poor preview audience reviews. The song happens just after John Smith is captured and is titled If I Never Knew You, furthering the operatic nature as the two profess their undying love for each other. Personally I can't see why it was removed, but since the film was 'for the children' and the song slowed down the climax, out it went; thankfully the original theatrical version is also included on this DVD so purist are kept happy too.

Pocahontas is, then, not your average Disney film. A little two serious in places, a little too silly in others, these two worlds don't quite jell, much like the English and the native Indians... Was this intentional?