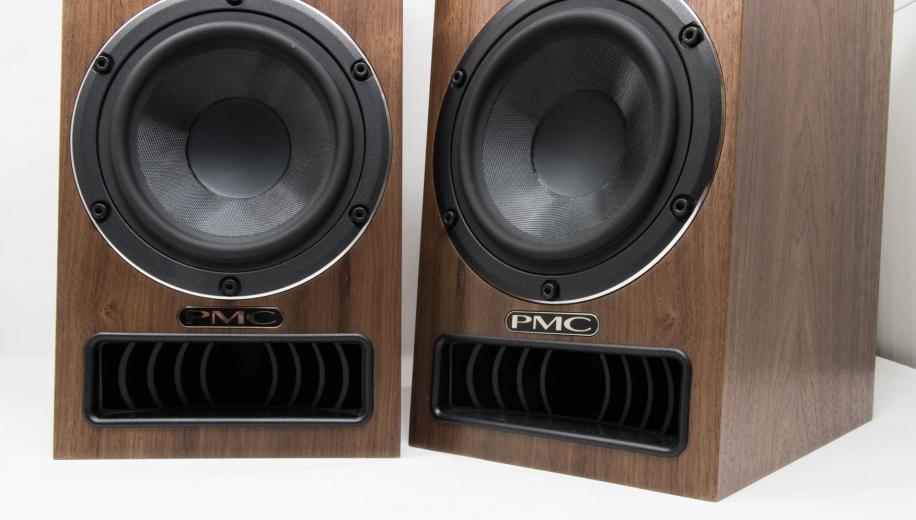 Introduction - What is the PMC twenty5 21i?

The PMC twenty5 21i is the smallest member of the twenty5i (a name that seems designed to provoke both journos and sub editors into nervous tics) range of speakers. This is a reworking of the original twenty5 range of speakers which came into being because PMC’s efforts to rework the original twenty series became sufficiently extensive, they were effectively a new speaker. This time, the work PMC has done is something that they feel doesn’t constitute a new range so the ‘i’ prefix is used to denote the new models.

The changes are more than a wipe down with an oily rag though and mean that the 21i has some considerable differences over the original 21 which we looked at a little over two years ago. PMC says the result is considerable step forward and, given the strength of the competition out there, it needs to be. At a fiver under two grand (a price that hasn’t increased from the outgoing model which crept up over its lifetime), this is a fairly pricey little speaker that has a fair bit to prove. On the other hand, there wasn’t a great deal wrong with the original 21 so do all these changes manage to improve on it? It’s time for an extended lockdown listen and deliberation session.

Like the original 21, the 21i is a two way standmount speaker, one of two in the range. The 21i makes use of a 140mm driver (along with the 23i floorstander) while the 22i and 24i use a 170mm unit in a proportionally larger cabinet (the flagship 26i also uses a 170mm driver but adds PMC’s expensive but fabulous dome midrange driver). The driver is unchanged from before, being a glass fibre unit with an inverted dust cap. This was a substantial revision in the original twenty5 series so it is not terribly surprising that it has been kept in place here.

The size of the cabinet is very relevant to PMC speakers because of the company’s ongoing use of transmission lines to augment the bass response. Even the compact cabinet of the 21i incorporates a transmission line no less than five feet six inches long. The mechanics of how this transmission line works have not been changed significantly since the major updates introduced in the previous model. The 21i still uses the ‘Laminair’ port that ensures that air leaves the transmission line in a linear fashion. It was wholly effective before so there is little reason to suspect that it won’t be here too. PMC quotes a lower frequency response of 46Hz which is fairly effective for a narrow shouldered standmount.

The big revisions for the 21i are happening at the other end of the frequency response. All models have a new tweeter that has been developed in cooperation with Norwegian company SEAS who has supplied PMC with tweeters for many years now. This is a two part design with a 19mm inner dome and a 34mm rolled surround. PMC says this gives a ‘best of both worlds’ approach to the performance as the smaller inner dome gives excellent dispersion and frequency response (PMC claims 25kHz) while the surround helps improve the sensitivity and integration with the mid bass driver.

This integration is further aided by a new crossover. This uses a 24dB per octave slope and it is built on black ‘military spec’ (your friendly reminder whenever this phrase is encountered that technically anything ordered by an armed force is ‘military spec’ so while these boards might be a constituent part of a Eurofighter, they could also be part of a calculator too) that make use of very thick copper tracks for optimum signal transmission. PMC has long been very fastidious about the components that make up their crossovers and nothing has changed here, with the parts being selected on a matrix of performance, reliability and cost. Like the original twenty5 series, the new models dispense with biwiring and connect via a single pair of speaker terminals.

When the original twenty5 21 was launched, one noteworthy feature was that the tweeter crossed over to the mid bass driver at a very low 1.8kHz. PMC has doubled down on this and dropped the crossover even further to 1.7kHz. This does mean that the tweeter has a huge amount of work to do but PMC is adamant that this is the optimal point for the two drivers to hand over. It does mean that the claims of improved dispersion from the tweeter are going to be tested pretty thoroughly.

PMC has also tweaked the aesthetics of the design too. The Walnut (pictured) and Oak finishes are the same as before (the Amarone finish that the review set of 21s arrived in that I rather liked has been dispensed with) but there is now a white sheen finish (no surprise given how popular it seems to be) along with a ‘Diamond black’ that commands a £200 price premium over the other finishes. Given this is a gloss finish, this is going to be less effective in a batcave space than a normal black ash and more expensive with it. There is a revised tweeter grille that I don’t like as much as the original version but the move away from the polished metal rear plate to a brushed one is a considerable improvement.

I’m going to state that I don’t think that the 21i is an especially pretty speaker. The Laminair port does give it the appearance of something that potters through the oceans eating krill and the balance of functional features and things that might be classed as purely styling is slightly uneven. I don’t like the chrome trim ring and brightwork on the tweeter guard and think the speaker would be better looking in an ‘austere’ version without it. PMC does provide magnetic tab grilles to hide it all away should you wish. It is extremely well made though. The cabinet feels very solid and everything has a confidence inspiring feel. The speaker terminals are brilliant and the quality of the veneering, even judged at £2,000 is seriously good.

How was the twenty5 21i tested?

The PMCs have been tested with both a Rega Aethos integrated amp running with a Chord Electronics Qutest taking a signal from a Roon Nucleus along with a Michell Gyrodec and SME arm running into a Chord Electronics Huei. They have then been switched over to a Cambridge Audio Edge A with Chord Electronics Hugo Mscaler and TT2 taking a feed from an SOtM SMS-200 Neo running as a Roon endpoint and an LG 55B7 OLED along with a Rega Planar 10 running via Cyrus Phono Signature phono stage. Material used has included FLAC, AIFF, DSD, Tidal and Qobuz and vinyl with some on demand TV services too.

More: Audio Formats - What It All Means

When I reviewed the original 21, I found it an impressively capable speaker. One of the things it did very effectively was eliminate some of the less desirable traits of PMC designs of old. Critically, it really delivered on the promise of transmission line bass; cleaning up that last ounce of sluggishness from the presentation and leaving an effortless deep and clean low end from the compact cabinet.

The most important thing I need to stress about the 21i is that there are no retrograde steps in the advancements its makes. Everything that was likeable about the old speaker has been retained but the improvements that have been achieved are notable too. The first is something that (run in permitting), is discernible out of the box. Based on the original 21, I was expecting a bit of a protracted session getting the positioning of the PMC correct for it to deliver the correct performance but this isn’t the case. The 21i still works best when a little care has been expanded on their placement - no less than two metres apart and with a degree of toe in is a given - but the amount of fettling that they require to start producing a decent stereo image is significantly reduced over the older model.

This is because that new tweeter works. Really works. At a stroke PMC has vastly improved the dispersion and evenness of the delivery (and, don’t forget, it is a substantial part of the delivery because the tweeter is responsible for everything from 1.7kHz and up). Listening to the new Strokes Album The New Abnormal, the PMC injects just the right amount of airiness into the performance, bringing a little space around the vocals, guitar and keyboard, without affecting the density of the record itself.

What is more, there is an extra hint of sweetness to this top end that wasn’t always present before. To be clear, any company that has the word ‘Monitor’ in its title isn’t going to have switched over to making something that warrants the term ‘romantic’ but listening to Placebo’s Nancy Boy on the 21i is to reminisce about a piece of music from my youth rather than experience a point by point demonstration that this is one of the worst recordings in commercial history. Once again, the ability of the PMC to prise open these recordings is critical to the improvements in performance it achieves with them.

This new found airiness complements the low end heft that the PMC brings over from its predecessor. Listening to Public Service Broadcasting’s live performance of Sputnik on the PMC is uncommonly satisfying for a small speaker. There is an effortlessness to the heft that it can bring to music like this and it genuinely helps the feeling of scale. There is a low end weight from the lower midrange that helps the scale and realism of what you are hearing. What is also deeply impressive is that they can continue to generate this perceived scale and heft at low levels and this is very handy with late evening TV viewing.

The PMC doesn’t have everything its own way though. The recently reviewed (and less expensive) Neat Ministra can go a little lower than the PMC and has a greater perceived punch while it does so. It doesn’t have quite the same weight across the lower registers when dealing with non percussive bass that the PMC does such an effortlessly good job with so the choice of which one is better for you is going to be one best solved with an extended listen to both.

The PMC does continue to demonstrate some considerable virtues too. It is not an easy speaker to drive but provided that there is a reasonable amount of power on offer, they are able to show their virtues from a relatively sensible price point. What they can also do is continue to show the benefits to more expensive equipment. The performance with the Rega Aethos and Qutest is exemplary but switch to the Edge A with two box decoding and the PMC is able to show the benefits that it offers. I usually say at this point that a speaker like this isn’t a ‘quick fix’ for more affordable electronics but some tests with the Cyrus ONE Cast suggests that the PMC will deliver the goods with equipment that need not cost the earth.

This is because that new tweeter works. Really works.

Let’s not waste any time. The PMC 21i is an already very good speaker made better. It takes everything that its predecessor did well and brings an airiness to the top end, a naturalness and sweetness that makes it consistently joyous to listen to. In some ways, it would have benefited from looking more different to the proceeding model to emphasise how much better it really is but that’s nickpicking. The PMC twenty5 21i just creeps in under the £2,000 boundary and it faces some very stiff competition but it is hard to argue with the performance it offers and for this reason it comes Highly Recommended.