All your favourite exclusive characters in one place 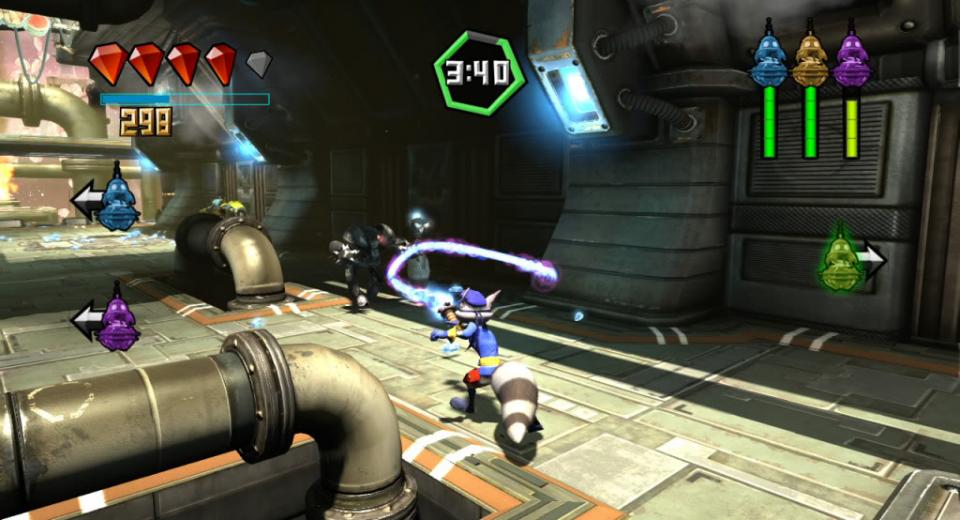 It’s coming, there’s no denying it; the inevitable summer gaming drought is almost upon us. But that’s not before we see a last hoorah of titles all appearing at once prior to the rare title showing its face throughout the summer. Amongst these pre-summer releases is the title in question here, PlayStation Move Heroes, another game that sees PlayStation’s Move controller brought into usage. Developed by relatively inexperienced studio Nihilistic Software, Move Heroes seems to have sprung up from nowhere with little preview material having been released since its announcement.

It’d be hard to make a mess of a game that is based around already existing characters and franchises, held dear in the hearts of many PlayStation owners. Taken in the right direction and given a new lease of life via motion control, Nihilistic Software could have a winner on their hands as long as they ship out a quality title and not another rushed half-arsed game that makes a hash of motion control. Swinging in its favour is the fact that Move Heroes is a 3rd person adventure game which is a popular market across all formats and therefore will more than likely catch the eyes of many who are big fans of the genre.

Sony wouldn’t want to see its name and more importantly, its new Move technology shot down in flames, therefore they must have confidence in Nihilistic to create a quality title. They are producing the upcoming Resistance game on NGP so there must be something there to give Sony confidence, but this will be their first Move game so their inexperience could shine through. Similarly, this is a 3rd person action/adventure game, as opposed to a First Person Shooter, so development will be very different compared to their future outing on NGP. So will Sony’s heroes save the day, or will they have finally met their match?

As with any game that is aimed at a younger audience, the graphics on Move Heroes won’t challenge the likes of Uncharted or Killzone but that’s not to say that they aren’t of a good quality. Following suit from Ratchet & Clank, environments are cartoon-inspired yet hold detail within them, so textures have depth and stand out rather than being two dimensional. All environments are full of life and reflective of the home worlds of the pairings that you get to play as; Ratchet & Clank, Sly Racoon & Murray and finally Jak & Daxter. All duos are familiarly voiced, making you wish that they could all (especially the latter of the pairings listed) receive a current gen release.

The overall layout and presentation of the title is very simple but effective, there are minimalized menus which suits the motion control perfectly, all effects are dramatic and over the top whilst bright colours are used throughout. Although aimed at children primarily, there’s nothing to say that an older gamer wont enjoy playing through this title.

The cut-scenes look top notch, each level appears to have been hand crafted and well-structured to appeal to the gamer and not look like a copy and paste replica of the previous level. All scenery is instantly recognisable if you’ve ever encountered any of the six characters’ previous games, making you fall back in love with them.

The premise of Move Heroes is simple; the three pairings have been teleported away from their heroic escapades and are being held captive in order to compete in a series of mini games to find the undisputed heroes of the universe. Naturally, all three pairs are somewhat disgruntled and try to outdo one another to be top dog/s, which is decided after playing through levels including bowling, disc throwing and adventuring. All of which make good use of the motion control and it never feels like it has been included for the sake of it, all mini games make sense to be played with the use of Move.

Each game has a bronze, silver or gold medal up for grabs depending on the amount of Whibbles you acquire, Whibbles being the native race on the planet you’re held captive. Whibbles are acquired through killing enough enemies, destroying cages they are trapped in, or knocking down enough pins with a ball. To do this, you are given a standard weapon or gadget to play with, but as you build up your kill counter you can unleash deadly power-ups and fire special ammo to help you along the way when you find yourself in a tight spot. This is all well and good but every now and again you can find yourself overwhelmed with choice of attacks when things get a bit hectic, so being on the receiving end of a wave of enemies can have a negative ending.

Whilst single-player is an enjoyable experience, there’s also a co-operative mode in place for buddies to team up and play as their favourite duo. You would have thought that this would play out with both players on screen playing as their favourite character. This is the case for player one, who will play as the main character, yet player two will merely point a crosshair around the screen and shoot enemies or help player one achieve their objective. Not only does this feel underwhelming when you’re player two, but it also gets very confusing on screen as player two can divert the camera away from player one’s focus. There is also very little, or no explanation of what each player does individually and what they can control, making you find your own feet at the start of the game which can leave you feeling flustered.

Longevity of Move Heroes is initially extended with a lengthy installation process, which is sadly occurring in too many games recently. Once you do get into the game though, you’ll enjoy playing it in short doses as it doesn’t hold your attention for too long as, although not boring, the levels don’t do anything to inspire you or attempt anything revolutionary. Given this factor, it’ll take you a while to battle your way through the 50+ levels especially when you consider that you may not achieve a gold medal first time round. Adding to its charm, PlayStation Move Heroes is a game that can be picked up and played at any time as there’s not really a story to follow on from and it provides itself as the perfect distraction from the other games in your collection that you may be becoming tired of.

So whilst Move Heroes is fun and a great way to utilise your probably under-used motion controls, it’s hard to see how this will slot directly into your already heaving gaming collection and hold your attention for as long as the big games out there at present. But if you want a title that doesn’t take itself seriously and you have an undying love for your Move controller, then this is the perfect distraction for you.

The PlayStation Move will inevitably bring a whole host of titles along with it, and most of them won't be a great success. PlayStation Move Heroes does, however, provide gamers with a unique package that blends fun, competition and a unique twist on PlayStations exclusive heroes in one package. Despite offering a solid game that utilises motion control well, Move Heroes could struggle to find a place in any gamers' collections though as it doesnt have much long lasting appeal.