There's a battle going on all right 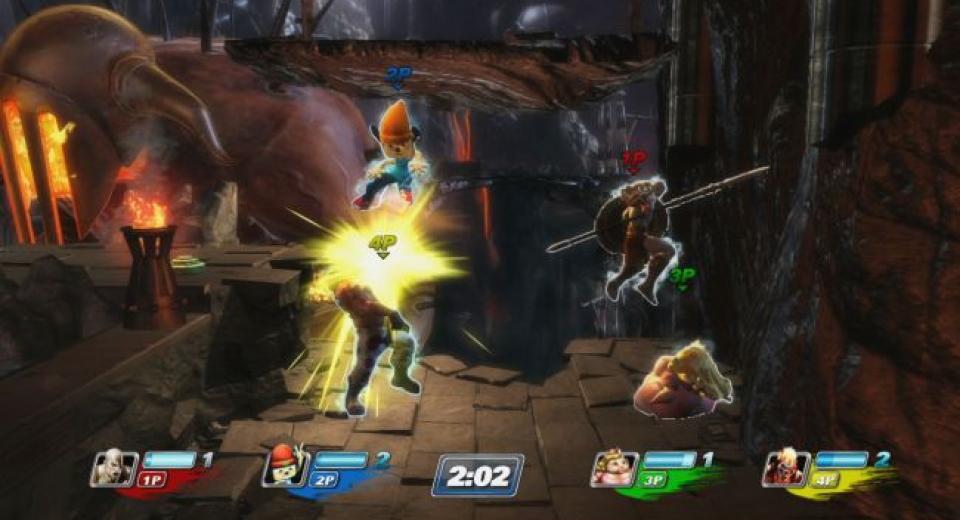 It’s ironic that a title based around the theme of battling and brawling has its own battle on its hands. Not only does it have to win over its home crowd, but it also has to take on its rivals in order to sell units for it to be classed as a success. The game in question is PlayStation All-Stars Battle Royale which is Sony’s take on Nintendo’s winning series Super Smash Bros.

Sony look to emulate the success from this series by pitting Sony’s biggest and baddest heroes, and some villains, against one another across different stages replicating recognisable environments from each character's home title. The only problem with this being are PlayStation owners really ready for this and more to the point, do they really want to play this title? Anyone wanting to protect the integrity of their favourite character will, but there is a very limited market here as the more mainstream crowd will probably avoid this one.

Whether it’s a sign of Sony’s uncertainty about the product as well as the consumers, not one studio worked on this game during development. SuperBot Entertainment were the main guys behind the title but Santa Monica were on hand to guide them and work with them throughout. So with one hand Sony gave them free licence to work on their new title but with the other hand took their freedom away by putting Santa Monica on standby. The number of characters available here is quite impressive with a wide variety of icons available for selection ranging from Nathan Drake & Sly Raccoon to the more quirky figures such as Sackboy and Fat Princess. All of them are well presented, donning their most iconic outfits and all move and speak in the way they do in their native titles. Thankfully there are no identical movement patterns or attack sequences, they are all unique.

As a result of this, each character's attacks and super moves must be learnt and mastered if you are to succeed in taking down your opponents. Fortunately there is a training mode where you can learn each attack sequentially and practice them before you head into the adversarial modes straight away. With so many characters available however (22 in total), taking the time to learn these moves for your favourite icons can take a fair amount of time. Not that this is a bad thing as those that put in the time will benefit the most but the learning curve will be hellishly steep for those that want to jump right into things.

Some of the attacks are well designed and implemented for each character as, just like the levels, they replicate actions they do in previous titles. For instance Sir Daniel Fortesque can chuck his head around like there’s no tomorrow whilst Kratos can fling his chained blades towards his opponents with relative ease. Confusingly, characters don’t have a health bar and can only be ‘knocked out’ by landing the above special attacks on them. Of course this will have been done in an attempt to make the battles last longer but for those that might be new to the game or are having a bit of a shocker, they might find it hard to continue if they can’t build their special attack meter.

The special attacks are nice in concept and theory, but trying to score a hit with some of them can be a royale pain in the backside. The majority of them don’t seem to have any sort of range and hits can only be made when they’re standing right on your toes.

What’s more is that attacks don’t exactly flow one after the other with a pause between them big enough to go make a brew in some cases. Ok, that’s a slight exaggeration but you get my point; any sort of unwanted pause in gameplay makes you a sitting duck for attacks which can be a pain right when you’ve nearly filled your special meter. Rather than just providing you with a themed background for you to bounce about in front of, you can interact with them and they evolve throughout each battle. For instance there’s a Buzz themed level where platforms resemble an answer on which you must stand (assuming you know the correct answer) in order to avoid an incoming attack. The Uncharted level, based on the opening sequence from the third title, sees the plane's contents fly out into the sky and your battle advances out onto the unstable cargo as time goes on.

Once you have tackled the mountain sized tutorial modes for your favourite and most used characters, you can take on AI in the offline modes or take your frustration out on some poor souls online. To start with the offline modes will be a safe haven for newcomers as the online modes do tend to be full of veterans who will hand your backside to you continuously should you make the smallest of mistakes.

Offline you can play arcade mode where you can see the story for each combatant and see how their stories end which is the shortest of modes but given the number of players here it does beef it out somewhat. There are also some notions of future titles from some of the heroes which, fingers crossed, will come true in the near future. The challenge mode will provide some thrills for players as you strive to meet certain criteria in order to progress through them. Obviously they increase in difficulty and some can frustrate but the effort you put in will undoubtedly be worth it to get the challenges completed and out of the way. The online mode provides the most drama when it comes to the gameplay however as you can be locked in a tense battle with one or more opponents with the next knock out being the winning one. The fights also become harder as enemy players move a lot differently to that of the predictable AI seen in the offline mode. But take note of my earlier point; the online games are a lot harder given the time put in by other players in order to be the best out there.

PS All-Stars is one of the first games to release with Cross-Buy compatibility which allows PS3 buyers to download a copy for free on their Vita and the same for the other way round. For all intents and purposes, the Vita game is identical to the console version albeit a little graphically inferior and a little less well-defined. Annoyingly, the trophy list for both games is identical meaning that you will get the same list of trophies twice should you own both platforms and wish to complete them both as far as you can.

Royale Pain In The Rear

At the end of it all though, All-Stars is a short experience that is unlikely to hold the attention of many gamers out there considering the other titles available at this time of year. For younger audiences this might keep them quiet for some time but if you’re a well-weathered gamer then it’ll be in your best interests to rent this or go try it before you buy it and, if you do, pick it up for a lowered price.