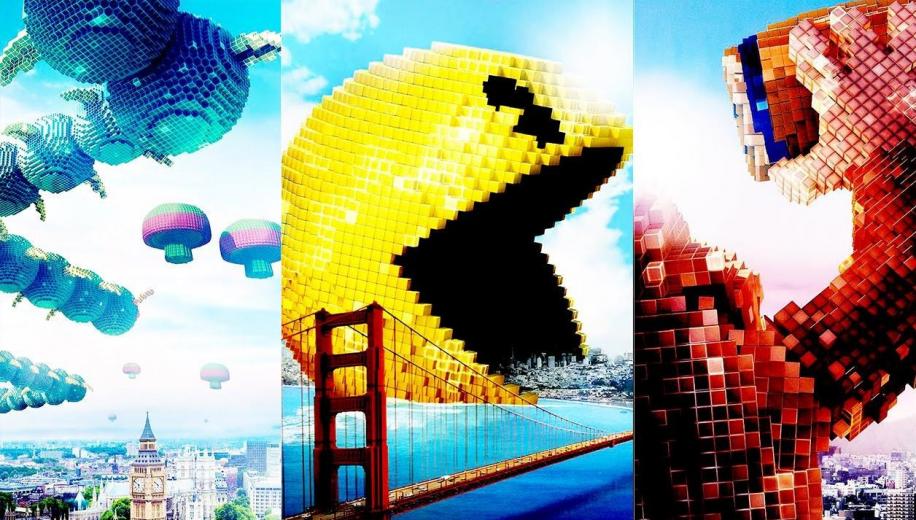 It's hard to figure out quite how a film about an alien race attacking earth using giant 80s arcade game icons ever got greenlit at all, let alone with a triple-figure budget and pretty flawless big screen blockbuster effects, but this was probably a dream come true for Sandler and co, who commit to the so-insane-it-just-about-works plot with gags and gusto. Attempting a scattershot cross-pollination of shotgun humour and almost Michael-Bay level world-destroying mayhem (80s arcade-style), there is something strangely endearing about Pixels' unapologetic, unpretentious go-for-broke approach to satisfying an audience with crazy ideas that must have been formulated under the influence of narcotics (or, simply, under the premise of "let's do a live action Wreck It Ralph"). It's not exactly memorable, and can hardly be regarded as "good" in anything but the loosest sense of the word, but it easily hits the lightweight entertainment button.
Still, surprisingly, one of the highest paid and most reliable box office draws, Adam Sandler is an easy fit for an everyman once-great gamer called upon to save the world. It's a role that actually works far better for him - in this more harmless family-friendly environment - than when he's misguidedly thinking a deer urinating in his mouth makes for humour. The cast of cohorts and co-gamers try their best too, no matter how out of place some of them are (*cough* Brian Cox and Sean Bean *cough*), with Kevin James, Michelle Monaghan and Peter Dinklage coming out on top. Sure, it's a strangely niche feature - whole generations out there won't have a clue what the gaming references are - but that's arguably part of its strangely disturbing charm, and whilst you might be desperate to dismiss it as worthless nonsense, it's only really the nonsense part that fits with Pixels veering away from worthless and in the direction of guilty pleasure.

Any doubts over the content do not spill over into the outstanding technical presentation.

Pixels gets a Region Free UK release that boasts outstanding visuals courtesy of a stellar 1080p/AVC-encoded High Definition presentation framed in the film's original theatrical aspect ratio of 2.39:1 widescreen. Detail is outstanding and finely tuned to pick up every little flourish in what is very organic-looking digital photography that laps up the vibrant graphics and live-action backdrop; the skin textures, and background details. The colour scheme is understandably popping with 80s primaries which pop and draw the eye, and they do well to blend the largely impressive visuals into the piece in a way that seldom looks jarring. Black levels are strong and with no digital defects on offer, this is an outstanding video presentation that easily earns reference status.

Sony Pictures have used an interesting release strategy for Pixels, with the US release including a Dolby Atmos soundtrack and the UK release using an Auro-3D soundtrack. Aside from that the two discs appear to be identical in terms of picture and extras but it does provide a rare opportunity to directly compare two of the competing immersive audio formats.

Cas Harlow reviewed the audio using a standard 5.1-channel setup - The basic 5.1-channel audio track for Pixels matches up to its stellar visuals with a punchy, potent sound design that easily succeeds in immersing you in the energetic proceedings even without the full benefits of the complete advanced multi-channel setup. Dialogue remains clear and coherent throughout, and the generic score is engaging, providing food for the surrounds and LFE channel. The effects are well-observed, from the old arcade jangle to the hi-tech weaponry; from the life-size gaming creations to the city-wide destruction that's wrought down upon various key locales across the planet. Sparking life into key set-pieces, this too is a demo-worthy and technically superior offering.


Eschewing the Dolby Atmos track found on the US release, the UK counterpart goes Auro-3D instead!

Steve Withers reviewed the audio using a 9.2-channel Auro-3D setup - Aside from the German Blu-ray release of Red Tails, this is the first Blu-ray with an Auro-3D soundtrack that we've had a chance to review and the first released in the UK. Quite why Sony Pictures have decided to use an Auro-3D soundtrack in Europe and a Dolby Atmos soundtrack in the US is a mystery but it does provide a unique opportunity to compare the two formats using the same film. To listen to Auro-3D you'll need a processor or receiver that can decode it but, assuming you have that, the Auro-3D soundtrack certainly delivers a wonderfully immersive surround experience.

Auro-3D comes in a number of different flavours and the disc's soundtrack could theoretically go up to 11.1 with a normal 5.1-channel layout augmented by five height channels and an overhead "Voice of God" channel. The maximum that our Denon AVR-X7200WA AV receiver can decode is a 10.1-channel configuration with a 5.1-channel layout, four height speakers and an overhead channel. However due to the configuration of our room, we were listening to the film's Auro-3D soundtrack using a 9.2-channel setup with a regular 5.2-channel configuration augmented by four height channels. The result was a fantastic sonic experience with a dynamic soundtrack that perfectly complimented the over-the-top video game visuals.

During the various video game themed action sequences, the audio would sweep around the room with the height channels adding another layer to the audio. The Donkey Kong sequence was especially effective, with barrels crashing down from above you and some fairly impressive bass. The Auro-3D soundtrack delivered clear dialogue amongst all the mayhem and there were plenty of opportunities for the sound designers to steer effects around the room. The result was a visceral experience that was certainly the equal of the Dolby Atmos soundtrack, although in our configuration we use a 7.2.4 Dolby Atmos setup, so it did have two additional rear channels to help create a greater sense of a 360 degree sound field. However if you were able to listen to the film in the full 11.1-channel configuration we're sure it would be an even better aural experience and certainly as good, perhaps even better, than the Dolby Atmos alternative. The extras package is a little lightweight, providing a smattering of short Featurettes which focus mainly on the games and gaming entities that are at the center of the film - Space Invader, Pac-Man, Q*Bert, Donkey Kong, Centipede, Galaga and Doja Quest - with a brief The Creator of the Machine addition and the inclusion of the Music Video of the song used over the innovative end credits (where a 2 minute version of the entire film is played out in 8-bit glory - arguably one of the cleverest ideas in the feature). Preview trailers on startup round out the disc.


Limited extras do not detract from an otherwise impressive steelbook design.

The UK Steelbook itself is a glossy, shiny Pac-Man-centric design with popping colours, accompanied by superb Donkey Kong-centric rear artwork. Perfect for the film, it's also one of the most distinctive steelbooks of late. Sure, a little embossing/debossing on the intentionally pixelated images would have been welcomed, but these are still iconic designs making for a colourful and striking release. Expect little to nothing out of it and you might find Pixels far from the terrible, unwatchable dross it's made out to be.

Lightweight, easy viewing, there's some inherent, unpretentious, unexpected entertainment on offer here, and the steelbook release not only offers up superior video and audio but also a striking package too.