"All you people are so scared of me. Most days, I take that as a compliment. But it ain't me you got to worry about now." 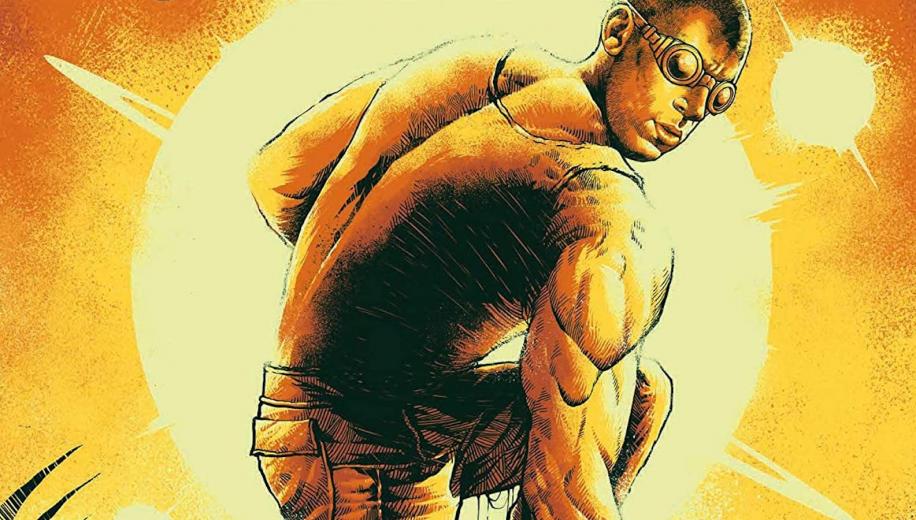 Back when Vin Diesel was a bit more of an unknown entity, hungry to impress, this low budget sci-fi gem came along wielding more than its share of visual prowess and tense survival / creature feature threat.

Taking its cues from Aliens, David Twohy's writer/director feature came off the back of his underrated Charlie Sheen sci-fi The Arrival, delivering a whole lot more than anybody could have possibly expected thanks to some excellent use of the Australian desert locations, and some very innovative visual design, filtering the shots using various tones informed by the three suns that supposedly govern the land, as well as the encroaching night, dressing it in piercing bleached oranges and overblown whites, monochrome blues, ship interior warning light reds or neon green night lights. It looked super-stylish for its budget, and thankfully had a sharp script to back up the visuals, kind-of closer to a The Descent in space, by way of Aliens, rather than a rehash of Aliens itself, and with a little Silence of the Lambs thrown into the mix for good measure.

The story followed an emergency landing on a seemingly uninhabited planet - or at least one where all the inhabitants have disappeared - with the disparate group of crash survivors initially caught up in the mere act of survival, then distracted by a threat from within: the convicted serial killer amongst them who gets loose. Eventually they discover the real threat comes out at when the suns go down...

Pitch Black is terrifically efficient, tense storytelling, refreshingly happy to cast its characters against type and surprise you with curveballs, introducing us to Radha Mitchell's ostensible heroine of the piece - the ship's pilot, Fry - whose initial decisions give her character an excellent extra layer of depth, and Cole Hauser's seemingly good lawman, Johns, who actually isn't a lawman at all, and who is transporting Vin Diesel's escaped convict back to prison - a seemingly deadly, cold-hearted killer who keeps the motley crew on their toes until the lights go out, at which point his skills prove an absolute necessity.

Expertly shifting your expectations at several points across the duration, there was something special about watching Pitch Black back in 2000, when Diesel would have been an unknown entity. Was he really the killer stalking them all? How were they possibly going to survive and best him?  Thankfully, rewatches still hold up as you follow the characters' shocked reactions to the knowledge that the real enemy is out there. Diesel really is on form here, full of energy, and even making a couple of really clunky cliched lines land just courtesy of his inimitable cadence. It is Mitchell - whatever happened to her - who is the real surprise though, playing a character torn over her decisions and the guilt she carries because of them.

Twohy shuffles the "heroes" and "villains" adeptly, before unleashing the real threat, and whilst he doesn't have the budget to overwhelm with creature insanity, again his visual ideas work wonders to make the most out of so little (shooting through 'Riddick vision' is a superb way around it, and shots like this haven't aged at all). The intense percussive score maintains the tension, the twists keep you on your toes, and Pitch Black is still a lean shark of a sci-fi gem.

Pitch Black comes to UK 4K Ultra HD Blu-ray courtesy of Arrow (in the US, Arrow are releasing Flash Gordon as well, but in the UK, Pitch Black marks their solo 4K debut), with an utterly sublime native 4K presentation for this Ultra HD Blu-ray release.

Arrow's rendition of Pitch Black is almost impossible to fault

Arrow have been working their magic on deluxe Blu-ray releases of catalogue titles for quite some time, often impressing not only with their more expansive extras but, in some cases, with their restorations comparing favourably to the 4K counterparts; with releases like Arrow's lavish 3-disc Waterworld Blu-ray set arguably competing with Universal's 4K release. All of this means that their first foray into 4K themselves had to be spectacular, and whilst it looks like their US release of Flash Gordon should match up to Studiocanal's tremendous UK 4K set, their first UK 4K release thankfully doesn't disappoint either, with Pitch Black proving perfect material to prove themselves in the 4K market and maintain their reputation for impressive packages of cult classics.

Affording us both the Theatrical and Director's Cuts of the movie restored in 4K under the supervision of director David Twohy, Arrow's rendition of Pitch Black is almost impossible to fault. Sure, the effects aren't always perfect - but they never were - and it's not exactly a glossy, big budget outing, but the style really lends itself to a HDR - and Dolby Vision - enhanced 4K image, popping with intensity, blistering with previously hidden detail and impressing with just how far it can push the extremes. It should be bursting with colour bleeding and crush, but some of the shots are so good, they could easily be swapped out for images from Diesel's Bloodshot from earlier this year.

Detail is excellent, bringing the desert landscape to life, as well as the ramshackle villages, which could have easily been leftover Mad Max sets, whilst skin textures, beads of sweat, flexed muscles, mottled hair and weathered clothing all can't escape the precision pull afforded by a new native 4K scan. The grain is fine and merely adds further texture to the piece, reminding you that any DNR has been carefully applied to clean but not scrub the image.

Of course, HDR and WCG make all the difference, and here Dolby Vision too, and Pitch Black is just a bounty of wonderful, innovative filters. Sure, it may not have the garish, lavish opulence of Flash Gordon's incomparable set design, but there's still a lot of imagination that's gone into this colour scheme, and the DV-enhanced HDR makes for the perfect way to revisit it, bringing the golden deserts, overblown blistering sun whites, cool, monochromatic blues and nighttime reds and greens to life with eye-popping wonder, all cast against wonderful, inky, bottomless blacks. Pitch Black has never looked this spectacular.

Pitch Black unfortunately doesn't get an Atmos upgrade from Arrow, but thankfully the DTS-HD Master Audio 5.1 track is excellent nonetheless, rattling your living room with LFE, throwing you around in space and on the ground, and bringing the swarming claustrophobia and ticking-clock momentum right home.

Dialogue remains firmly prioritised throughout the piece, afforded clarity and distinction across the frontal array (aside from brief spurts of lateral vocal input, including during the curiously aborted opening narration), whilst Graeme Revell's score is superb, all percussive momentum perfectly married to the on-screen action (the bit with the suns going down and the beat builds to a crescendo then slowly slows down as the power goes out is excellent), also knowing just when to stop and let the sound of scary silence take over. Effects are impressive too, from the creepy screeches of the creatures to the body blows and painful slashes. Shotgun blasts thunder out, the opening crash sequence has some nice frenetic craziness to it, and the LFE is more than happy to get involved in the proceedings. It may not be Atmos but it more than gets the job done.
﻿

Arrow's Pitch Black set is utterly comprehensive, going above and beyond to provide a wealth of material affording background into the production, and worthy of praise for its provision of not only the remastered 4K Theatrical and Director's Cuts of the main movie, but also the excellent animated sequel Dark Fury (by Aeon Flux's Peter Chung) which bridges the gap between Pitch Black and Chronicles. Throw in a bunch of Audio Commentaries, over half a dozen new Interviews, a slew of Featurettes and plenty of promo material and you have absolutely everything you could possibly hope for, although perhaps one of the nicest things about this package is that they've ported everything over to the 4K disc itself.

There are 2 Audio Commentaries - the first with Twohy, Diesel and Cole Hauser; the second a Twohy-led more technical effort; 7 new Interviews with everybody from Twohy to a couple of the cast members, the Cinematographer, the Visual Effects Supervisor and the Composer; a Making-of Featurette, a Pitch Black Raw Featurette which compares storyboards to pre-vis to final footage; a Short Prequel with Johns (Cole Hauser); Dark Fury along with all of its extras (Featurettes and pre-animation); the Slam City Motion Comic; Into Pitch Black with a non-canon look at events before and after the movie; the Raveworld celebration promo; and a bunch of Trailers and Galleries. If that's not enough, the package comes with a reversible slip-cover and looks to have an alternative artwork sleeve too, and has a booklet advertised for good measure, although we weren't able to see the finished product to confirm these latter elements.

Richard B. Riddick would go on to be a beloved character for Twohy and Diesel, who have refused to put him down since, going big for the flawed Chronicles, which had some fantastic ideas in its epic landscape, but lost some of the intensity and uncertainty afforded by Diesel's is-he, isn't-he anti-hero, and then returning for the lower-key Riddick, following the failure of Chronicles, which is smaller in scale and budget, and initially at least a little more in-line with Pitch Black in tone, even if it does veer off-track. And they're still circling a further film, whether it'll ever happen - this clearly being an absolute labour of love for the duo. But the end of the day, nothing from this universe has really come close to the taut, efficient intensity of Pitch Black, and nothing probably ever will.

Arrow's debut dive into 4K - at least in the UK (the US also gets an Arrow release of Flash Gordon) - is a fabulous opening shot, providing a stunning Dolby Vision-enhanced native 4K presentation, and an utterly comprehensive selection of extras which actually make it onto the 4K disc itself. Fans should consider it an absolute must-have, and Arrow have done us proud with their first 4K disc.