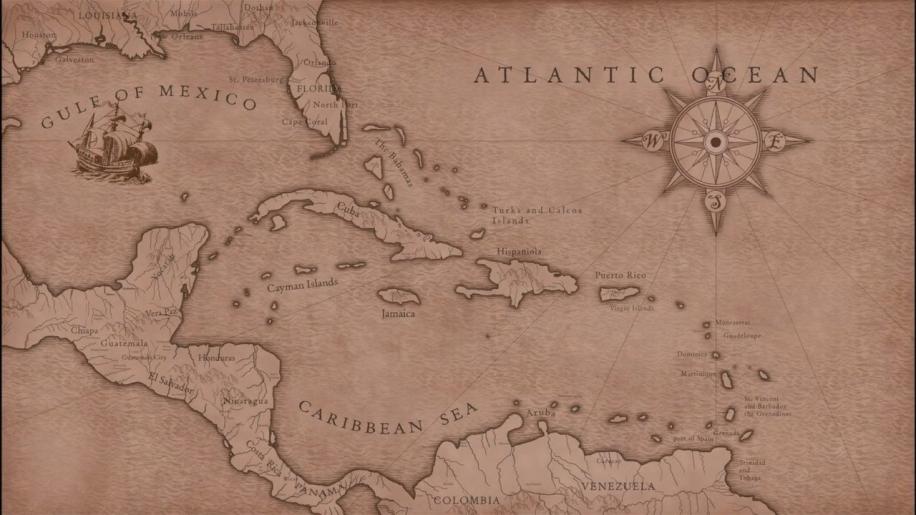 'Blackbeard' first aired as a mini series in the USA in 2006 and boasts a respectable cast including Richard Chamberlain, Stacy Keach and Rachel Ward.
Chamberlain and Ward had appeared together in the memorable TV series 'The Thorn Birds' and fans will, no doubt, take the opportunity to see them together again on Blu-ray in this Hallmark Entertainment produced swashbuckler.
Over the years, Hallmark has made many lavish (by TV standards) productions to feed their own Channel, including an excellent version of 'Gulliver's Travels' starring Ted Danson.

'Blackbeard' is confidently helmed by experienced TV Director Kevin Connor, a Brit living in Hollywood, who apart from episodes of 'Hart to Hart', 'The Return of the Saint' and 'Space:1999' will be remembered for four big screen monster movies starring Doug McClure, including 'The Land that Time Forgot'.

So, the credentials are good, but how does the mini series fare?
'Blackbeard' ticks all the right boxes. It has everything that a good pirate film should have. It has full size sailing ships, sea battles (shot off the coast of Thailand), a mutiny, sword fights a go-go, duels with pistols, a pretty wench (Jessica Chastain), walking the plank, buried treasure and even a marooned hero.

The story kicks off fairly immediately with Royal Navy Lieutenant Robert Maynard, played well by Mark Umbers, being sent to New Providence to make the sea lanes safe for honest sea faring folks again. Accompanying him on his voyage is Charlotte Ormond (Jessica Chastain), adopted daughter of the island's Governor Charles Eden. Unfortunately Governor Eden, played by Richard Chamberlain, is in cahoots with the Captain of the pirate ship Queen Anne's Revenge and does his best to discredit him. Maynard goes undercover as a member of Blackbeard's crew, but is eventually discovered. Along the way there's Blackbeard's search for Captain Kidd's treasure with a map tattooed on the back of the local 'oar', Sally Dunbar - played by Rachel Ward, so it's all jolly boisterous stuff.

It purports to be the true story of Blackbeard, real name Edward Teach , who stood out among the lawless rogues at the dawn of the 18th century as the most fearsome and notorious seafarer of them all. In reality the story has more to do with the creative imagination of the writer, Bryce Zabel (also screenwriter for Hallmark's recent 'Poseidon Adventure'), who carefully avoids the use of “Avast, me hearties.”, “Shiver me timbers” and “Yo, ho, ho!” in an attempt to avoid over-egging the pudding.
So far, so good - but here's where the problems start to creep in.

Blackbeard is played by Angus MacFadyen, who appeared as Robert the Bruce in 'Braveheart'. Sadly his portrayal of the seafaring rascal just doesn't convey the menace required by the role. In deciding upon how to play the role, MacFadyen seems to have thought he should make him appear to be an ogre. So that's exactly what he does, but just one ogre in particular by the name of Shrek! Right down to Mike Myers' exaggerated comedy Scottish accent. After this revelation, it was a bit like trying to watch an 'Airport' disaster movie following a screening of 'Airplane'.
Someone really should have told him. No Angus, he's not green and he doesn't have a donkey - so lose the accent.
MacFadyen lacks the screen presence (and acting experience) to make the character threatening, fearsome and hated. The bottom line is - he's just not scary. Look out, here comes Blackbeard - big deal! Part of the blame for this must lie with the director as it's all in the eyes - and there's very little use of the eyes to convey the menace.
A bit of a shame really, as the whole piece really hinges upon the credibility of a titular psychopath.

Rachel Ward, who appears to have had Dick van Dyke (well stroik a loight, it's Mare-ree Poppins) as her dialogue coach, is woefully underused in the fairly minor role of pipe smoking Pub owner and lady of easy virtue, Sally Dunbar.

Mark Umbers plays the hero Maynard with a stiff upper lip and looks good in a fight - whether wielding a cutlass or engaging in fisticuffs.
The real star of the show, however, is Jessica Chastain who plays the love-interest as a feisty gal who knows how to use a flintlock or blunderbuss to good effect.
Richard Chamberlain is credible as the crooked Governor and looks good in a wig.

In general, it's an entertaining enough affair and there's enough going on to hold your interest for its 169 minutes. It just lacked the spark that was needed to make it a truly involving experience. Overall, remember it's a Hallmark romp and you won't be disappointed.