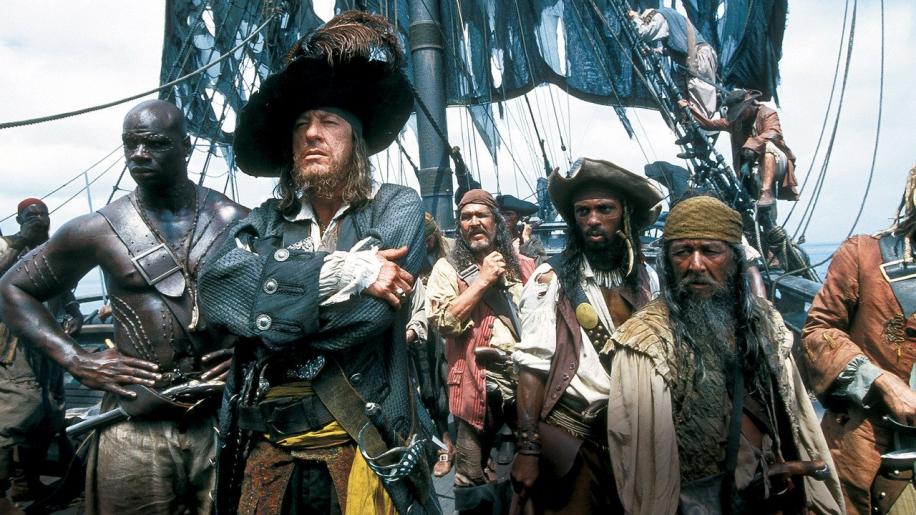 Pirates of the Caribbean: The
Curse of The Black Pearl
should have been the worst
film of the year. Not only is it
a belated attempt to jump-start the
pirate movie genre, but it's also
based on a theme park ride!
The plot is both straightforward and
unnecessarily complicated, but I will
at least try to outline it. The roguish
pirate Captain Jack Sparrow (Johnny
Depp) and blacksmith's apprentice Will
Turner (Orlando Bloom) join forces to
track down the evil Captain Barbossa
(Geoffrey Rush). For Sparrow it's a shot
at revenge, as Barbossa was originally
one of his pirate crew who lead a
mutiny and left him to die. For Turner,
it is a chance to rescue his beloved
Elizabeth Swann (Keira Knightley),
who was kidnapped by Barbossa.
What neither man realises is that
Barbossa and his crew are undead,
and they believe the solution to their
infernal plight lies in Elizabeth's blood.
So far, so ho-hum. And yet, Pirates
of the Caribbean somehow manages
to defy the odds and reveals itself
to be the best blockbuster movie of
the year by a considerable distance
(despite a seemingly butt-numbing
135 minute running-time). The reason
why the film succeeds against all the
odds is down to a number of factors.
First we have the wit and charm that
is sprinkled liberally throughout the
script. Then we have the conceit of
zombie pirates, a visual trick that
works incredibly well onscreen thanks
to the superb work by ILM. But more
than anything else there is Johnny
Depp. Every time his Captain Sparrow
arrives, the film is energised by a truly
nutty performance that proves that he
is the most charismatic actor of his
generation. Depp takes this film and
almost single-handedly turns it into the
most enjoyable cinema romp for years,
so just sit back and enjoy the best
blockbuster in recent memory.