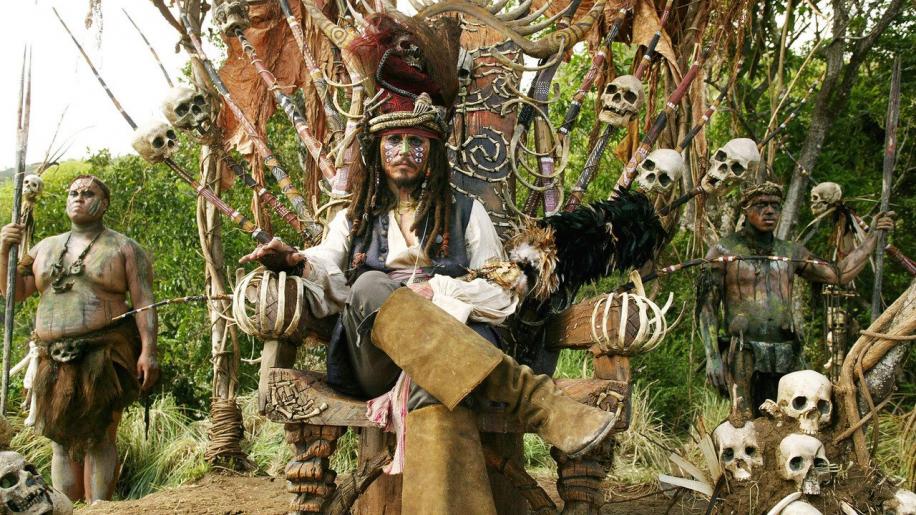 This is quite a glorious transfer, folks. The anamorphic 2.35:1 image boasts a tremendous wealth of detail that is rendered with a sharp, rich and colourful gloss that yields up more treasures with each viewing. Details like the multitude of briny protuberances upon the bodies of Davy Jones' crew, or the trinkets and minutia that adorn Jack's cabin, or the beads, bones and body-art decorating the cannibal tribe, or even the nails and grooves in the wooden decking etc, are all extremely well presented, offering an image that is literally packed-to-the-gills with visual information.

Colours are exceptionally strong and vivid, with the resolution for this standard DVD consistently gleaming and finite. Scenes that are lit by torch or candlelight - below decks or at night, for examples - have a keen definition and a solid weight of reassuringly deep black levels keeping detail, contrast and atmosphere at a premium. Depth of field is powerful too, with ships on the horizon, distant islands or mountains, or the figures of Jack, Will and Norrington battling it out in a three-way duel across the far-reaching white sands. The sickly yellow glow to Tia Darma's shack and the fireflies flitting about outside it are wonderfully rendered against the deep shadows, and the clarity afforded the scenes set aboard The Flying Dutchman present awesome rewards for those who let their eyes rove around the screen.

There are no compression errors or artefacts, no smearing or over-saturation and hardly any evidence of edge enhancement to speak of. In short, this is an excellent transfer that will look spectacular on whatever viewing platform you've got.

Although this edition does not carry a DTS track, there is absolutely nothing to complain about with this DD 5.1 mix. This is exactly what you want from a surround sound package, with enough all-round action to keep any audio-junkie happy.

Voices are clear and sharp at all times, without ever becoming submerged by Zimmer's wildly over-produced and ever-present score. Good, strong bass adds enormous weight to the multiple ship wreckings, the roaring canon-fire (especially Jones' triple-guns), the crashing of waves, the thunderclap-summoning of the Kraken and the many, many hard-hitting impacts. There is excellent steerage of the sound around the speakers, with dialogue and action following the on-screen action with effortless realism. The front soundstage is a riot of fx, score and bombast for almost every minute of the film's long running time, but the rears are brought into play very frequently, and satisfyingly, too, with some well-achieved aural delights whipping past your ears.

The best DVD audio track that I have ever heard is the DTS mix for Master And Commander, and it certainly holds true that a good seafaring saga is a prime test for an system workout. Dead Man's Chest doesn't quite rival that classic track, but it still fills the room with convincing waves, sea-spray, the creaks and groans of timber and the chaotic cacophony of a crowded ship upon the waves. Absolutely excellent, folks.

Disc 1 contains the movie, a commentary from the film's writers Terry Rossio and Ted Ellitott, some sneak peeks for forthcoming releases and a brief, but worthwhile, Blooper Reel.

The chat track pretty decent, although a cast commentary would have been infinitely preferable. The pair converse fluidly and with good-natured delight at their film, following the action on-screen quite closely. We get to hear about the nixed idea for showing us the fate of Jim Hawkins' father at the hands of the sadistic Mr. Mercer - that's Jim Hawkins from Treasure Island - and there are one or two hints about what is to come in Part 3. The pair have the screenplay to hand to quickly reference and compare their text to the finished film, and there is a certain amount of fun to had from their Americanised pronunciations of words like Kraken and Edinburgh. They are also honest about areas of the script they'd have liked to revisit to make events and motivations clearer to the audience. It is also nice to hear what became of my (and my son's) favourite line from the teaser trailer - Will's abrupt “Never mind ... let's go!” when he sees Jack being pursued by the entire cannibal tribe across the beach. It really is much better than the line that ended up being kept in.

So, not a bad track, overall.

Disc 2 the real haul of goodies, though sadly, like me, you may find that the law of diminishing returns applies.

First up a pre-production walk-through called Charting The Return (25.39 mins). This gives us a little insight into how the movie was brought about without the aid of anything even barely resembling a script, and the notion of the trilogy is addressed. We spend time with Verbinski, Bruckheimer and various others as they discuss the problems of creating two films at once. However, the main scripting issue is quite conveniently mentioned (and, perhaps, erroneously, left in) when someone actually says matter-of-factly that they just came up with cool sequences they'd like to see and then found a way of stringing them together. There is also some casting footage - check out the skinny guys! - location-scouting, set construction and some tests of the huge water-wheel.

According To Plan (62 mins) basically covers the actual filming. We get to see lots of shooting taking place and monitor watching, but what this feature does primarily is focus on how the vast production crew became a family and enjoyed themselves so much - in that time-honoured and sycophantic fashion we all know and hate. “Hey, you get fit on a Gore Verbinski picture!” says one crewman sprinting uphill to the location, with a patently for-the-cameras smile on his face. There are lots of talking head interludes, but precious few snippets from Depp, Bloom, Knightley, Davenport and McNally etc - which is shame. But there is some good footage from the water-wheel fight, though.

Captain Jack - From Head To Foot (26 mins with a Play All). Doing exactly what it says on the tin, this slight set of mini-featurettes just supplies the background to all of Jack's clothing and accoutrements under the wise steering of costume designer Penny Rose, who proves to be both personable and full of anecdotes.

Mastering The Blade is just a trio of little features on how Bloom, Knightley and Davenport trained with their swords, and reveals a little bit of the stuntwork, as well. Running for roughly five minutes per person, this is just filler. And where is Johnny Depp, I wonder? Oh yeah, that's right - his character seems to have forgotten that he is a great swordsman in this film.

Then we get the real disappointment for CG fans. Meet Davy Jones: Anatomy Of A Legend (12.30 mins) and Creating The Kraken (9.58 mins) are special effects featurettes that don't really do their creations justice. Davy Jones benefits from a nice CG strip-down montage that gently peels away the digital layering that actor Bill Nighy underwent to bring the barnacled buccaneer to life. But this is too slight and much too brief to do justice to one of the greatest CG characters ever realised. For the Kraken, the best bit reveals the huge prop tentacles that take down a ship via heavy explosives and even heavier weight. But, really, these little docs only just scratch the surface.

Dead Men Tell New Tales (12.58 mins) is a nice little piece about the actual Disney Ride and how the movie characters have now been incorporated into it.

Fly On Set: The Bone Cage (3.46 mins) focuses on the construction and filming of the hanging bone cage sequence, with the real actors suspended high up and swinging forwards and backwards against a huge blue screen. Looks like great fun, folks. They should put this in the Disney Ride.

Photo Diary (4.37 mins) is just Jerry Bruckheimer's love letter to his most bankable cash cow. Set beneath Zimmer's score, we see some of his on-set and location photos, intercut with some of his thoughts on the project.

Pirates On Main Street (3.56 mins) is just press-junket World Premier footage ... and a waste of time.

Well folks, although at first glance there appears to be a deluge of treasures here, they turn out to be just a scattering of well-worn trinkets. Davy Jones and his crew are not given enough coverage and, worst of all, there is precious little input from the main stars throughout the five-odd hours of extras for the biggest film of the year. Not that impressive, after all, but enough to supply a taster of what went into creating the middle part of what will, no doubt, prove to be one of the most successful film franchises ever made.

Despite being a huge disappointment to me upon its theatrical voyage, Dead Man's Chest finds its sea-legs on DVD and proves itself to be tremendous entertainment and a hold-full of good-natured fun. Not exactly Mad Max 2 or The Empire Strikes Back perhaps, but this middle section does the right thing in leaving you wanting more.

Disc-wise, this is a great release, with a superlative image and a crisp, engrossing soundmix. We still crave a Johnny Depp commentary - done in character, eh? - but this is still a pretty well-stocked package, although not a patch on a lot of other special editions out there. For me, this film was a no-brainer - life in my house would be impossible without it - but, even for the more discerning or casual fan, Pirates 2 comes highly recommended for mental-switch-off eye-candy.