Pirates of the Caribbean: At World's End Movie Review 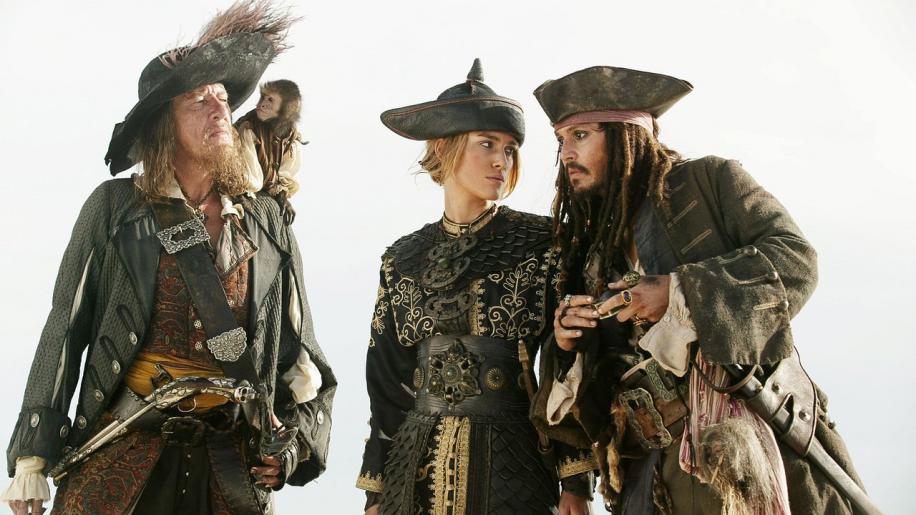 It's interesting how a franchise can build up such a reputation and then lose it all with one slight misstep. I remember all the fuss when the first two Pirates movies came out on hi def earlier this year, but the third seems to have slipped out with very little fuss indeed.

This may have been a lot to do with the second film in the franchise. Whereas the first film focussed mainly on the relationship between Will and Elizabeth, and very much had Jack Sparrow as a supporting character - the second movie moved his character much more towards center stage, and as a result Depp's perfomance rather over egged the pudding. Add to this the rest of the sub-plots and in the cinema the second movie felt extremely disappointing. On Blu ray however, the second movie revealed itself to be a far better film that it was originally given credit for. In the comfort of your own home, the disc seemed to be a far better home for the film than the cinema was.

So, on those grounds I gave the third instalment a miss until it came to Blu ray and then booted my PS3 eagerly. And maybe because my expectations were lowered by the appalling reviews, I was actually pleasantly surprised.

It is unlikely that anyone who has come to this film has not seen the second, so I do not feel it is much of a spoiler to say that at the end of Dead Man's Chest (2006) Depp is dead and languishing in Davy Jones' Locker. Here he may well stay, as he is universely disliked by pretty much every character. “Why should I come with you? Four of you tried to kill me. One of you succeeded!” However, rescue him they must, because he is one of nine pirate lords, who must convene in order to vanquish the East India Company - who now have Davy Jones fighting on their side due to their possession of his chest.

What follows is a race against time to save Sparrow, convene the brethren, unleash Calypso, and fight to the end with the EIC. Along the way, several major characters will die, one will meet a fate which is most unusual for a blockbuster like this, and all will not be the same by the end.

As a threequel - this is no way as bad as the reviews will have you believe. The film begins in a shocking audacious way - a way, I contend, that no big blockbuster would dare to start. This very dark beginning suggests that the dark heart of Dead Man's Chest will be sustained into the third instalment. Sadly, though, this is not the case. It seems that the relative failure of the second instalment means that the director deliberately steers away into a more comic book style. However, this does lead to an inconsistency of tone. For example, there is one scene where the Pearl is sailing through an ocean of dead corpses, unable to be collected because Jones is in the employ of the EIC. This is a wonderfully haunting scene, but is rather spoiled by a moment of comedy which doesn't serve the scene too well. There are other ill judged comic moments that do rather spoil the emotional content of the film but thankfully these are rare. They do jar when they appear though.

In terms of acting, there is a stellar cast here (as in all the Pirates movies) and they do an excellent job. Sparrow is pared back, and so is Depp's performance (he doesn't even appear until 30 minutes into the film) - and the result is that he is as engaging as the first film and not as annoying as the second. Geoffrey Rush is back as Barbosa and it is obvious that the second film missed his phenomenal performance. The supporting players do a very good job as well, including Chow Yun-Fat - although I was surprised how little screen time he got.

I am going to be completely unfashionable here. I have never had a problem with Orlando Bloom and Keira Knightley. I think they are both very good, if limited, actors and I think their performance in this instalment is the best of the lot. They get more screen time, their relationship becomes more important, and the two do a very good job.

So, why has this film garnered so many bad reviews? Well, it is far too long for a start. The Brethren plotline seems only to have been introduced as a device to give the characters a reason to get Sparrow back from the dead. Once they introduce this plotline however, it has to be resolved and this weighs down the middle section of the film terribly. It does unbalance the film, because the really big set pieces do not come to the end of the film and by then it is possible that some attention spans might be on the wane.

There is also a complete lack of action set pieces. Whereas the first one has some spectacular scenes, the second one was pretty much wall to wall action and set pieces. This may have lead the makers to reign the third one in a bit, with the result that whereas there are some spectacular scenes (the Pearl turning upside down, for example) there is nothing to match Dead Man's Chest until the end with the maelstrom sequence. And because they have left this until the end, they seem to have this sequence go on far too long, which undermines it's effectiveness.

To sum up then, this is not the disaster that many say it is. It is a film that is sometimes confused in tone, and is rather unbalanced. But there is enough here to like, and enough good ideas to just about pull the film-makers through. I am not going to play the game of rating the three films in order. At World's End is a trilogy closer and as such it does a good, if not excellent, job.