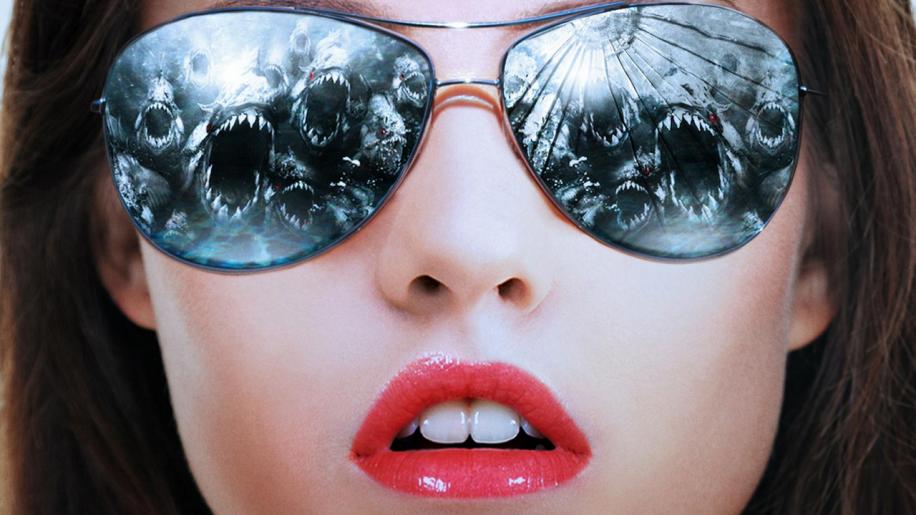 Certainly not from this year’s rude horror-comedy flick in any case. The market for these films can be summed up by the 18 certificate category warnings - Rated 18 for sequences of strong bloody horror violence and gore, graphic nudity, sexual content, language and some drug use. To put it another way, it is aimed squarely at teenage boys and a few of their more blokey girlfriends. I first saw this film over the shoulder of a bunch of lads on their way to a stag do in Newquay on the train. I think that kind of says it all about the audience.

The plot – yes there really is one, is a follow on to the original film. Some killer fish, awoken from their slumbers in deep caves start terrorising “innocent” swimmers in a freshwater lake water park. So far so good, a nice formulaic horror movie. So how to make it appeal to the target audience? Throw in some cute girls who all appear to be too poor to buy enough clothes, a celebrity appearance or two and actually quite a lot of humour. Bums and boobs are the order of the day. It’s not porn but it gets very close at times. This really is not the sort of film to leave lying around the house for your granny or young sons to find. Depending upon your viewing habits, you may have come across a few of the stars before. Danielle Panabaker, Jean-Luc Bilodeau and Katrina Bowden will be better known to American domestic audiences, their apprenticeships being through TV movies and kid’s sitcoms. Matt Bush is a little newer to the scene but is building a track record of supporting actor parts quite nicely. More established names including David Koechner and Gary Busey provide a solid backbone, but the kids won’t notice as they don’t look good in beachwear!

So the setup is a corrupt businessman has set up an adult’s only water park with topless lifeguards and to save money he pumps water from the underwater lakes that just so happen to harbour the piranhas. We see a flash back to the first movie and a news item showing the destruction the fish caused (Filmed in the abandoned Salton Sea resorts) and then it’s back to the beach party by way of a farting, exploding cow!

So what about the 3D(D)? I started off being a little disappointed, but although the first few scenes are weak, it does pick up. There are a few pop out effects that will make you jump but the gore and violence does not really benefit from the 3D as much as it might. Crosstalk during the darker scenes also gets annoying after a while. Incidentally, do the boobs look bigger in 3D? No, not even the silicon enhanced variety so much in evidence here.

Back to the plot. We now have a water park full of cuties, cute kids and expendable extras. Before they can all be eaten though we need some more comedy gore. The line “Josh just cut off his penis because something came out of my vagina” says all you need to know about the funniest cherry popping sex scene I have ever seen.

The opening ceremony of the water park is conducted by none other than David Hasselhoff in full Baywatch regalia. He hams it up wonderfully, I don’t think he ever takes himself too seriously and he obviously enjoyed making the film. The scene where is stops half way through the slow motion Baywatch run to catch his breath kind of says it all about his cameo. Christopher Lloyd (Back to the Future) as the mad professor is of course type cast for this sort of role and it is a shame more could not be made of his character. I guess it’s a case of getting the balance right between establishing the plot and not slowing down the action, but Lloyd is well known for his timing and I think a bit more plot could have been thrown his way.

The killing sprees make up about 70% of the movie and more than 90% of the good bits. Everything else is really just padding and the odd plot explanation. Most of the humour is contained within these frenetic sequences, but the Hoff does get a few choice lines in between. If you like your gore bloody, slightly plastic and very in your face, this should satisfy. We now of course need some heroes and heroines to save the day. These are fairly easy to identify early on as they are the ones who kept their clothes on. It really is quite simple to work out, the fewer clothes you wear, the quicker you become a bloodied and battered corpse. These piranhas are virtually unstoppable, with prodigious strength and jaws that can bash through steel. They also have a penchant for hiding in ermm… more intimate areas shall we say. I always thought that piranhas decimated animals down to the bone, but this species seem more intent on nibbling the flesh and leaving the body still recognisable. Never mind, we still get a couple of decapitations with lots of spurting to increase the body count.

The locations are a little sparse - a water park, a lake and a motel. That really is about it. Of course, the water park is all bright colours but the lake is somewhat more muted. It’s a bit difficult to correlate these two locations as they are supposed to be next to each other, but the change in scenery is really great a leap. Will anyone care though? Probably not.

So, my thoughts on the film. It’s actually quite a good comedy gore fest. It does not take itself at all seriously and rips along at a good pace. Down sides are that it is far too predictable and the lack of locations makes it all feel a bit small. I laughed out loud a few times and of course a plethora of scantily clad young ladies is always welcome. Not a lot to offer on the whole if you are a straight female, as the number of ripped young men is quite low. I suppose the Hoff is better than nothing, but he might be more for your mothers!

In short, if you are having the lads around for a curry and a few beers, this is an enjoyable, bawdy comedy movie with lots of blood and gore thrown in. If you are looking for a theatrical masterpiece, then I doubt you would have got past the cover artwork as the target market is clear from the outset.